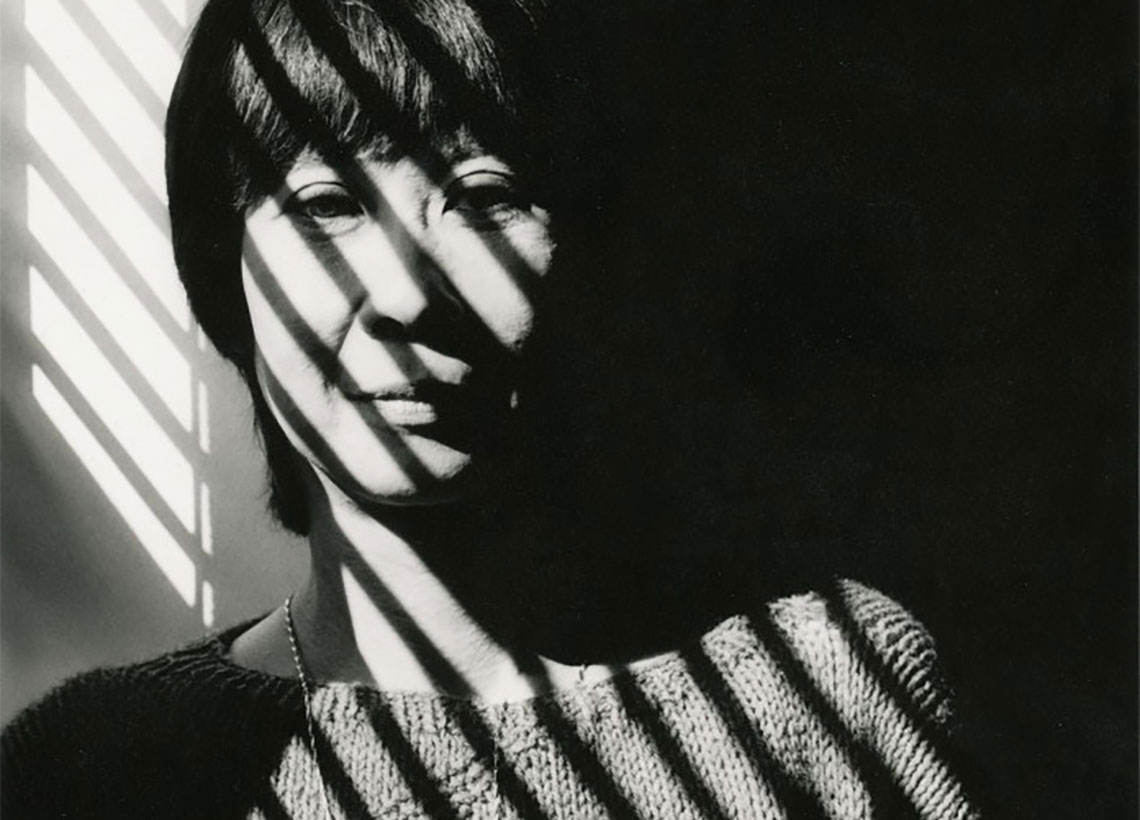 AN INTERVIEW WITH ALEX TURNBULL ON KIM LIM

Kim Lim was born in Singapore but lived in London most part of her life. How is her art rooted to Singapore and South East Asian culture in general?
My mother was always very aware of her roots and upbringing. Any idea that she somehow abandoned or divorced herself from her heritage is completely wrong. The main reason she left Singapore was so she could pursue her quest to become an artist which would have been completely impossible in Singapore at this time. Even in Europe during the late 1950s, the concept of being an artist was somewhat frowned upon. It was certainly not considered a ‘proper’ profession. Attitudes were even stricter in Singapore during this period. When she came to England it’s certainly not the case that she would have been easily assimilated. Even during my childhood in the late 60’s and early ‘70’s, racism in society was quite overt so one can only imagine how it must have been during the 50’s. I have been told that in Singapore during this period, mixed marriage was so frowned upon, both by the Chinese and English, that Anglo-Chinese couples kept pets in place of having kids, such was the stigma attached to having children of mixed race. It’s a testament to my father’s open mindedness that he saw only her beauty and talent as an artist. Indeed, he often said she was one of the most talented artists he ever met. Certainly he was a huge fan of her work. So to return to the question, she was always very aware of who she was and where she came from. I think her art reflects this and, in some ways, is much more about a culmination of many influences without relating to any one thing specifically.

Her work is often compared to Brancusi’s, how would you describe her attachment to abstraction?

Brancusi was and is an amazing artist. One of the great artists of the 20th century. He was someone whom influenced both my parents immensely. Personally, I think her work is every bit as good as his. If you were to put one of her sculptures next to one of his, it would hold its own and not look out of place. I do think her work is somewhat more feminine and softer perhaps. Certainly they share a fluidity and flow. It’s also worth noting that her work is influenced by Japanese aesthetic and culture. This is particularly interesting given the history between Singapore and the Japanese during the war. Her father, my grandfather, Lim Koon Teck, was the magistrate who was charged by the British with handing over Singapore to the Japanese when the British left. His experiences scarred him and he always carried a deep mistrust of the Japanese due to his experiences during the war. My mother wasn’t bound by such baggage though she would have been old enough to remember some of these things. I think she empathised with the Japanese aesthetic of simplicity and fluidity. Indeed some of her early works have titles such as Samurai and Ronin, unusual given the circumstances but indicative of her forgiving and gentle nature. For her I don’t think it was so much about being abstract or figurative specifically. It was more about feel and sensitivity. Her work has an innate calmness and serenity which again reflected her personality. She was a wonderful human being and was taken from us far too early.

Kim Lim has worked with a lot of different media especially sculpture and prints with an equal attention to both. How were these practices feeding each other?
I think if you look at the works, both prints and sculpture, during specific periods, it’s very easy to see the connection. Very often, drawings act as a mapping of intention for artists and I think in many ways the prints worked in this way for my mother. She had this huge printing press in her studio which my brother and I used to turn for her. She would encourage us to make etchings on brass plates and then allow us to print them. We didn’t understand that with print-making the process works in reverse, a negative so to speak, so inevitably our ‘drawings’ always came out with the writing backwards. Her prints are incredibly beautiful and reflect the same flow she exhibited in her sculpture, especially the stone carvings she made post 1979. Nick Serota, the director of the Tate Gallery was a big fan of her prints. When I interviewed him for my film Beyond Time, he told me that the first show he ever curated was of her prints while he was at Oxford University.

In a lot of works, there is a special attention to lines. Is this linked with wood carving and how do you think the lines interact with the purity of the shape?
Again I think it relates to the movement and flow of the works whether wood, stone or prints. I think she regarded herself as equally a sculptor and print maker and accorded equal significance and importance to both. It’s about form and surface rather than the medium.

Kim Lim was married to internationally well know British artist William Turnbull, how did his work infuse her practice?
As I mentioned before, Bill always said she was one of the best artists he’d ever met. I think people tended to assume that she was influenced by him but I’m pretty sure it worked both ways. Having spent many years cataloguing both their work, I can see that they both drew influence from each other. I can see things in her early work which crop up in his work and vice-versa. My brother and I were born in 1962 and 1963 respectively so inevitably during this period much of those responsibilities would have fallen to her. However she made some of my favourite sculptures during these years. To her great credit, though it must have been distracting, she always managed to be productive even with 2 young boys. I guess the experience of giving life is in many ways not too dissimilar to creating art.

Kim Lim travelled a lot around the world in unique sites. Was she looking for the archaic path of different countries, was she tracing the past? What were the common points of these countries?
Sadly I can only speculate on this. When I interviewed her good friend and fellow artist Tess Jaray for ‘Beyond Time’, she actually credited my father with helping to reconnect my mother with her roots. I suppose that inevitably, when you are young, there is always a bit of you that is somehow trying to escape. As a young woman growing up in Singapore during this period, it must have been very tough to be an independently minded woman. I think a woman’s role in life was probably fairly well prescribed. Find a good man, get married, have kids, look after the kids and that’s it. I think my mother had a bit more in mind. In fact, it speaks volumes for her that she left Singapore aged 18 to go to art school in the UK. She came from a good family, was very beautiful and as I understand it, had very wealthy suitors lining to marry her. I’m not sure it was part of my grandmother’s plan for her to go to the UK to study art. Fortunately her brother Han had already left for London to study law so somehow she managed to convince her parents to let her go under the watchful eye of good family friends, Lord and Lady Kissen and Malcolm McDonald, all of whom acted as her surrogate parents while she was here. It must still have been quite a battle as my grandmother was no push over. Again it’s a testament to her resolve and strength of character. As I said before, my father would have encouraged her to embrace her culture rather than escape it. I think that when you are of oriental extraction in the West, perhaps the racial boundaries that govern you when in Asia tend to disappear. Westerners tend not to differentiate between Orientals whether Chinese, Japanese, Vietnamese etc., or that was certainly the case until quite recently. Consequently, it’s perhaps easier to embrace other Asian cultures when you live abroad than when you are living in Asia. I have certainly found that to be the case in my life growing up as a half Singaporean in Britain. I think this enabled my mother to embrace and integrate different aspects of Asian culture into her work without getting caught up in the prejudices and preconceptions that are often so prevalent and restrictive.

Can you talk about one particular trip that marked her, maybe her trip to Cambodia in 1962?
I know the trip to Cambodia was very important for both my parents. My father served in the RAF during the war and had already travelled to India and Ceylon. It’s important to remember this was at a time when most people never travelled outside a 50 mile radius of where they were born. Certainly travelling to Angkor Watt would have made my mother aware of the power of stone and carving. It’s also important to note that neither of my parents ever had assistants. Both made all their work themselves. So travelling to somewhere such as Angkor Watt would have reminded her of the immense richness of Asian culture at a time when perhaps the West was being looked at as the answer to everything. To have travelled there, or to the Zen gardens in Japan, must have been quite eye opening for her in terms of realising the depth, history and beauty of Asian culture and heritage.

For you, managing Kim Lim’s estate, what does it mean to exhibit Kim Lim’s works in Singapore?
It’s hugely significant for both my brother and me. Johnny and I have grown up visiting Singapore annually and we’ve watched it develop from a colonial outpost into the incredible city it is today. We’ve just opened a beautiful show of her work at the New Arts Centre in Roche Court in the UK. It has been tremendously well received and is the first show of her work anywhere in 16 years. Her work was exhibited at the National Museum of Art in Singapore in 1984 and previously at the Alpha Gallery in 1974 but both these shows were a very long time ago. Much of her most beautiful work was done in the period after this, before her passing, so I know my mother would be very happy and proud to know that her work is to be exhibited in such a beautiful gallery in her country of origin.