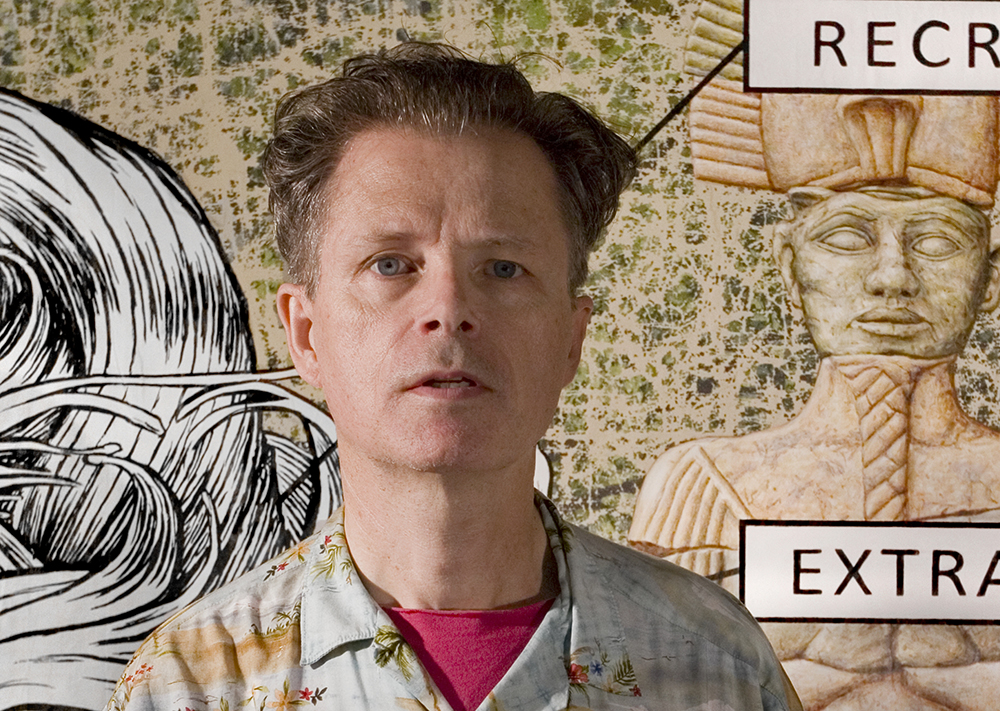 Born in 1952 in Midland, Michigan. Lives and works in Los Angeles. Graduated in 1978 from California Institute of the Arts.

Since the late 70s, Jim Shaw’s evolution has taken the form of cycles, developing through several series, an original and discontinued narration.

The image of an effervescent universe, contained with great difficulty within limits, could also serve as a metaphor for Jim Shaw whose works are, in some way, the transcription of murky, oneiric depths, rich in images of a teeming America with dreams and nightmares. (Jim Shaw’s retrospective catalog - MAMCO/Casino).

The most famous and constant part of Jim Shaw’s work, probably, is the way he uses his dreams as in the well-known series of ‘Dream Drawings’ and ‘Dream Objects’. The artist began to inventory his dreams and in 1992, he started a series of pencil drawings based on these dreams (approximately 500 works to date). Shaw’s dream drawings are accounts of actual nocturnal visions and serve as one of his primary visual sources and inspiration.

For the surrealists dream work was an end in itself, for Shaw it serves as a fantastic reservoir of images that allow him to make what is, at times, a totally unique art. The diary works for Shaw as a source book from which he selects single motives to reproduce as dream objects that are then realized as oil paintings, photos, drawings - and sculptures in a significant range of different techniques and dimensions.

Jim Shaw challenges the intrinsic authority of art, just as he questions his own identity as an artist, by eschewing any personal style except in the confusion of styles and the heterogenous references. Through the various means used - paintings, installations, films and performance - Jim Shaw propels the viewer into the core of his creation. In this imaginary universe, he selects objects, then envisions them, bringing his own vision into reality.