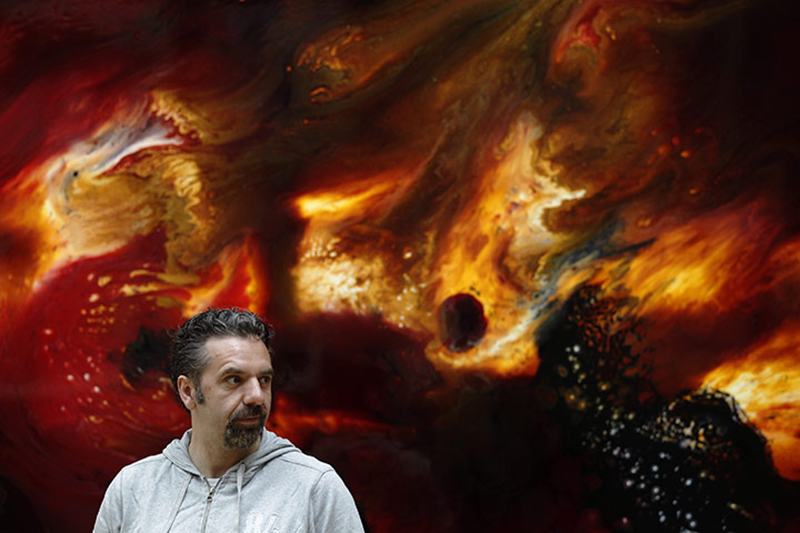 Born in 1969 in Ulverston in the United Kingdom. Studied art at the College of Art in Carlisle and the University of Brighton.

Claude Monteverdi’s pancreas; a parking meter clicks into “expired”; the South Pole; a butter y; Harry Houdini holds his breath; wear on leather elbow pads; coral growth; teleportation; cold fusion; typing 100 words ...’ On and on Keith Tyson’s list goes. An inventory of incident and historical or possible facts generates images that are worked up into drawings, objects, photographs or videos, or sometimes left as written proposals.

The term, ‘conceptual art’ is now often used journalistically to describe the new, non-traditional art-forms of ‘Brit Art’, but it was originally coined almost three decades ago to describe, among other things ‘art as idea’. It appropriately describes Tyson’s method and the physically and temporally un xed nature of some of his art objects. With his list of propositions, Tyson is probably closer to conceptual artists of the 1970s such as Lawrence Weiner or On Kawara than many of his contemporaries. His multi-layered work, though, is nowhere near so reductive or ‘dry’ as that of these earlier artist.

Scienti c and mathematical references occur throughout, and Tyson seems to know what he’s talking about, quoting lecture notes and explanations to friends and interviewers in the studio wall drawings. As a culture, we place much faith in the scienti c method. But, as Tyson’s investigations, models and collisions seem to show, science can never nd the answer, a uni ed theory of everything.

Open Lecture is a sound installation of a lecture Tyson gave, and for which he made notes on a large canvas. Listening to the text, viewers can nd the relevant notes and follow them, almost as if they had been part of the original lecture, looking at the individual elements of the painting in exactly the order they were executed.