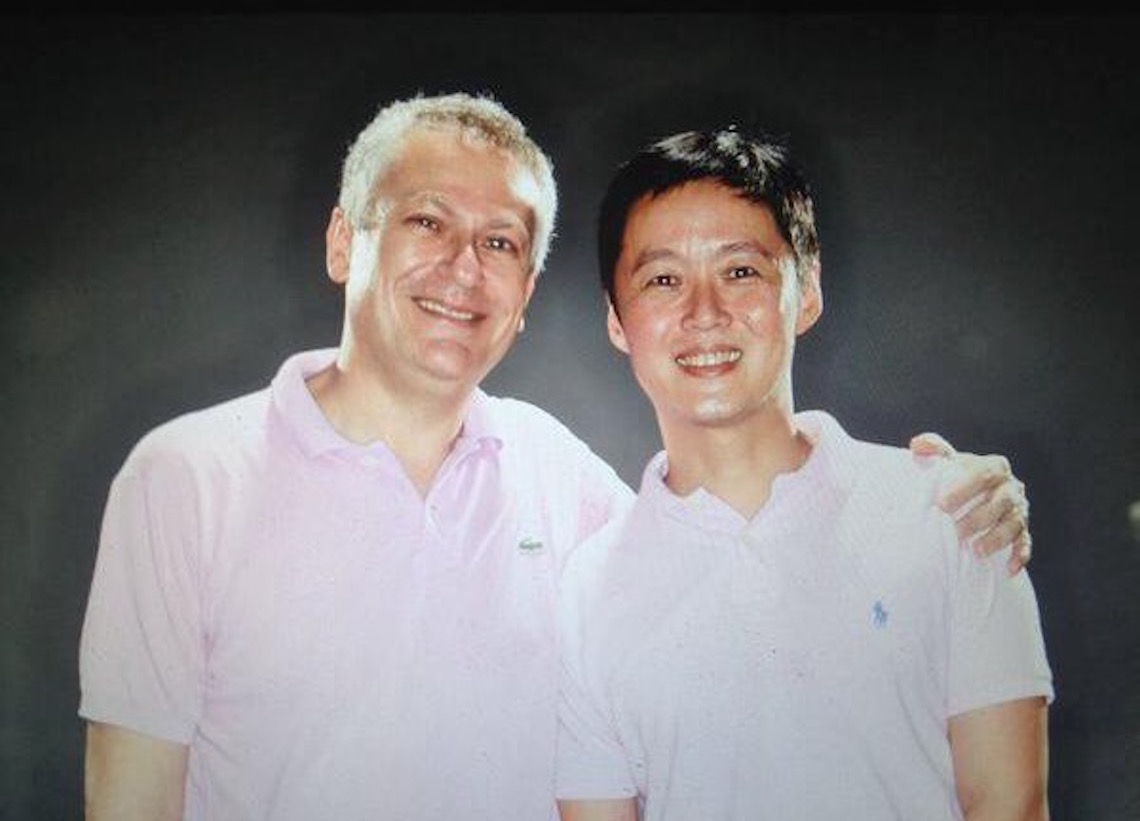 Collector Guillaume Levy-Lambert credits art with changing his life dramatically. The change began in 1999 after he and his partner, Mark Goh, encountered “Desk Calendar”, an iconic painting by Roy Lichtenstein that serendipitously includes their birth dates.  The French-Singaporean couple credits the painting for cementing their lives together and putting them on the path to serious art collecting. Fifteen years later, their MaGMA Collection boasts 300 Asian contemporary artworks, including paintings by Wang Guangyi, Yue Minjun and Zeng Fanzhi.  What sets MaGMA apart is a unique presentation style, akin to an illustrated fairytale.  Each diptych presents a painting on one side and an episodic narrative by Guillaume on the other.  Selected works from MaGMA were first exhibited in Singapore in 2010 and at Sotheby’s in Paris earlier this year.

Why did you decide to start collecting?
We had a specific objective: to leave a trace of that calendar story.  We want to let our story be known.  In 1999, one month after we met and halfway around world, we were facing Roy Lichtenstein’s work—and amazingly, it included our birth dates! That encounter with Desk Calendar changed my life.  And now collecting continues to change our lives.  These paintings are like our babies.  They have a life of their own.

How did you organize your exhibition for Sotheby’s?
We transformed the paintings into diptychs, with help from Jean-François Milou, the chief architect of Singapore’s future National Gallery.  They tell the story.  In the Paris version this past January, the stories were bilingual.  We believe that if we both disappear tomorrow, the “children” are there to tell the story.  Maybe one day an artist will be inspired and create works because of this collection.  We are building a myth.  We’ve got people thinking.

How do you display the rest of your vast collection?
Art becomes setting for life.   We live in a shophouse in Singapore.  Once a year we completely curate a new look, exhibiting a different collection of works.  One year after we rearranged everything, it felt like we had moved house!  The regular change keeps the house pulsing with new energy, as if a feng-shui master intervened.

How has MaGMA influenced your professional life?
I believe in reinvention. First, I left the banking world overnight after 13 years. Then I moved into advertising for 10 years. Six years ago, I decided to reinvent myself yet again.  Art now consumes the bulk of my professional interest, from managing the exhibitions to launching an app.

Is it a moneymaker?
Collecting is an expensive, addictive and intensely enjoyable passion.  Then, sometimes we make more inspired choices that the market appears to reward as well.  But until we decide to sell, it’s virtual.

Have you come close to selling?
Actually we were very close to selling quite recently.  We had a great opportunity. It was as if a child had been accepted at Harvard!  But then, one of us thought, “no”. When we talk together about selling a painting, it’s rather like discussing whether a child is ready to go to college.  You may be a proud parent, but you know it means the end of life as a family.

What actually stops one of you from wanting to sell?
The main challenge is this: we are really emotionally attached to our “babies”.  We have never seen them as investments.  Rather, they are our legacy.  The works are not just works.  They are the medium through which we share our story.

MaGMA is certainly unique.  Do you envision selling the paintings and narratives together?
MaGMA is a collector who came out as an artist.  The physical transformation of the painting into a diptych is an artistic creation.   As such, at some point, we could consider selling both together.  Is there a market for that?  I don’t know.

People call your collection “powerful”.  Why?
MaGMA’s mission is to share the transformative power of art.  A painting changed my life.  Perhaps a painting can save a life.  The first story we wrote, illustrated a painting by Nyoman Masriadi, exhibited at the Singapore Art Museum in 2008.  It was about a friend of ours who died of a heart attack, perhaps due to steroids.  By writing that story, maybe people will think about their own friends, and have the courage to confront someone in danger.  That exemplifies the power of art.  While the exhibition was going on, I love watching people look at the painting, then read the story and pause in contemplation.

You make a number of spiritual references in your exhibition.  Why?
We tried to understand the dates from Lichtenstein’s point of view.  Though we attempted to research it, initially we could find nothing.  Then we were reminded of the 1993 movie, “The Wedding Banquet”, by Ang Lee.  It was probably the first movie with an openly gay storyline and it had impacted us a lot.  The lead part was played by Mitchell Lichtenstein, Roy’s son.  It took me a few months to understand the connection between movie and the painting, and then I heard Roy’s voice in my head:  “Guillaume, I did this painting for you.” Now bear in mind, I was a “militant agnostic”.  As a kid, I had refused to do my bar mitzvah.  But after taking this journey and confronting these extraordinary events, my view of the world changed.  At that point, I wondered, “What am I supposed to do with this?”  And then the answer came: “share it.”

How did you first come up with the idea of meshing your written work with the art pieces you had collected?
It was a long process, but there was a first moment. Mark and I were stuck on an islet off Phuket on the day of the tsunami.  That’s the day I decided I had to share the story.  It led me to leave advertising.  Initially, I wanted to write a coffee table book and use the paintings as illustrations, but then I decided to shorten text and create an exhibition.

Was it difficult to find a venue for the exhibition?
An art gallery in Singapore welcomed us warmly, back in 2010.  It became an opportunity to appeal to a different public.  The same thing happened with Sotheby’s in January 2014.  They gave us a fabulous space.  Visitors were stunned by our non-selling exhibition!

What criteria do you use when you buy art?
We have three criteria.  First: aesthetics.  Second, what I call resonance.  Does the painting awaken something within us?  Does it call out our name?  Do we wake up thinking about the painting?  Third, legacy.  Can the work be part of our storytelling?  It must be something that should survive beyond us.

Do you each have different strengths you bring to your decision-making?
Mark is an architect, an urban planner.  He is the more academic of the two of us.  He reads widely about the artists we consider.  I am more intuitive.  I see and I think I know.

Do you have a price range?
Most of what we buy is in the five-digit range, though sometimes it’s four and other times six. We buy the work of young artists.  When we got started, they were our age, but now, of course, they start to be younger than we are.  We buy the art to tell our story, to leave a trace.  The investment aspect—whether the work will ramp up in value—is not a criterion.

Do you disagree about what to buy?
It happens.  But if we differ, usually it becomes a filter.  We can’t buy everything.

What advice would you give people wanting to start a collection?
Go for it.  Art adds so much to life.  It’s more than being surrounded by beauty.  Having art in your home accelerates your own journey of self-discovery.

If price were not a factor, who would you collect?
Lichtenstein.  On Kawara.

Do you plan more exhibitions?
Yes, but we are not ready to announce any details.

Ultimately, what will you do with the collection?
Frankly, we don’t know yet.  We’re open for suggestions.

An interview with Collector Sylvain Levy

Interview with Chiara and Steve Rosenblum