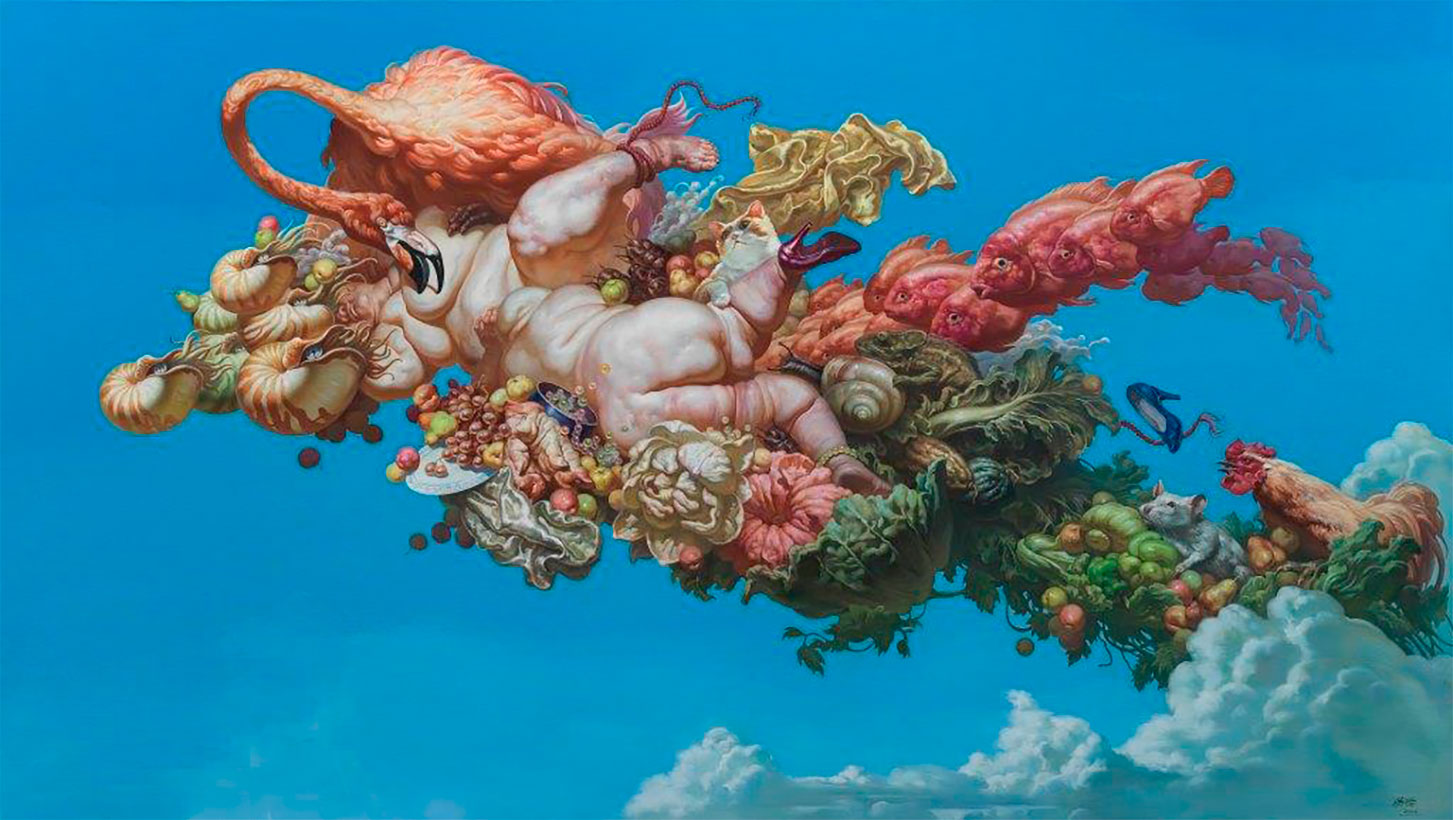 “My work seeks to portray movement, elegance and the impact of powerful visuals within flexible dimensions, where all these aesthetic components coincide with the key elements of classical art. Eventually, I gravitated towards the classical style for these reasons.”

At first glance, Fu Lei’s oil paintings can be imagined as contemporary successors to the grand ceiling frescoes of the 17th century, while his pencil drawings of boudoir interiors with oriental furnishings call to mind the Odalisques of the following century.

The 56-year old Chinese artist’s work derives much inspiration from what he terms the “classical style” to portray his themes of materialism and excess. As a child growing up in a military compound in Beijing, Fu Lei was pushed towards drawing by his father and kept at it all through his formative years. A turning point came in university when Fu Lei began to pick up classical techniques of painting, and first encountered prints of Old Master paintings. A later trip to Europe’s museums cemented his deep connection with these masters, leading Fu Lei to adopt their style in his works.

In particular, Fu Lei confesses a deep admiration for the Flemish painter Peter Paul Rubens in and indeed has taken the Rubenesque figure to extremes. Under Fu Lei’s hand, Rubens’ nudes are now shaved, bulging and engorged to mottled limits. Their physical nudity belies the fact that Fu Lei has stripped them too of their personality and humanity by concealing their facial expressions or showing them as completely impassive. Like grotesque mannequins, they exist as objects, as significant as a plump fruit, or a pork loin. It is this distinctive motif of the obese body that inspires an intriguing reading of the works.

“I juxtapose plants, animals and human beings without hierarchy or distinction. They have a common value of existence and together, they are a great body of lust. In my opinion, the obese bodies manifest the excess of desires. I choose such figures to express the concept of great lusts. I don’t think the fat body is different from an apple, a lotus or a ladybug in any way. They are all products of desires and they are equally valuable.”

If one follows this classification of the body as an object, his boudoir drawings may be read not only as an Odalisque but also as a kind of a pronk still life – an extravagant variation of the still-life genre which showcased expensive and exotic luxuries of an increasingly prosperous Netherlands in the mid 17th century. In Fu Lei’s versions, familiar objects of the genre feature from Chinese porcelain, pearls, luscious fabrics to fresh fruits and flowers, with a hint of modernity in the sighting of a glossy pump shoe. But now, the fattened body lasciviously tied, is intended as an object of desire as well – less a person but more a property – to be owned, desired and flaunted for aesthetic pleasure.

In his Paradise series, this greater mass of collective lust is taken from the boudoir to the same radiant skies that grace the ceilings of the grand palaces and abbeys of Rubens’ age. In these works, produce and creatures feature more prominently, as if the subjects of a banquet or pantry pronk still life have reanimated and raptured into the high heavens. Further defying the notion of a still life, the objects and creatures charge through the pictorial space with a tremendous sense of dynamism and theatricality, not unlike the sweeping ascension of the mythological and allegorical hosts of those grand ceilings. Yet the immense compaction and the tumbling posture of the bodies conversely recall the falling away of the condemned. If Fu Lei’s absurd pantheon serves an allegorical function – it is that of a consuming lust taken too far.

Hidden in these brilliant cornucopias are signs of bondage and danger. Though the torn red ropes of the boudoir trail the bodies, it is but an illusion of freedom. The twisting and pressing together of bodies coupled with their suggestive placements recall Ruben’s own renderings of pagan mythological rape or abduction. Instead of a heavenly being, the captor and aggressor in the Paradise series are the very objects of desire. Furthering the abduction narrative is the appearance of colossal birds. With their otherworldly dimensions, Fu Lei’s great birds seem contemporary counterparts of the eagle and swan in the Prometheus and Leda narratives respectively, with the artist depicting them on the verge of feeding or violating. Meanwhile, the other objects too seem to rebel against the bodies. In place of the broken boudoir ropes, draperies, pearls and beads coil around the ankles and wrists of the bodies as if to prevent any means of escape from the swarm. In Paradise No.6, the pearls even form a lustrous noose around a fattened neck. It is this more overt antagonism of the objects against the body that helps it regain a sense of otherness, and by extension, its humanity.

In that sense, Fu Lei’s paintings can be understood as pronk-vanitas pieces where the intent of the work goes beyond displaying objects of desire for aesthetic purposes to deliver a moralizing lesson on the transience of life and earthly pleasures. If the body is still to be read as an object, then it is like a skull. In place of this traditional motif, Fu Lei’s corpulent body becomes the key memento mori. Accordingly, the luxury items and produce too take on new meaning as symbols of decay and the fleeting pleasures of this world, their fleetingness enhanced by the Fu Lei’s treatment which shows us these objects already on the course of imminent destruction, instead of merely implied. As more and more objects cram into the ever-swelling corpus, Fu Lei’s turbulent and anarchic arrangements seem to poise on the climatic edge of disintegration with feathers loose, broken pearls and tumbling fruits. Are they rising to an eventual self-destruction or are they falling from Paradise? These scenes in which the bodies are overpowered and borne helplessly along seem to unfold a present-day myth of the dangers of gluttony and greed. There is little room for quiet mediation in front of these forceful visions. Standing before them, they spill into our own space through an overflowing drapery or appear to hurtle towards us. They seem to say that we are next.

As the sensuous splendor of Italian Baroque palace ceilings reflected the ambitions and power of their noble families, and the richness of the pronk still life the prosperity and status of affluent burghers and aristocrats in the 17th century Dutch Golden Age, so perhaps Fu Lei’s exuberant yet morbid vanitas reflects the frenetic contemporary consumer in our globalized age of wanton materialism. In Fu Lei’s paradise where every delectable good is to be had, the question remains of the consequence of literally having it all. The answer is clearer in his pared down drawings of the body left in a bare morgue-like room or a dead chicken stuffed into a beaker or bowl. Yet it is difficult to look past this whimsical and jubilant veneer to find the barb of a moral lesson. The works of Fu Lei remain paradoxical. In their great beauty and skill, we are invited to indulge our senses with them, blissfully and willfully ignoring the cautionary message they carry.