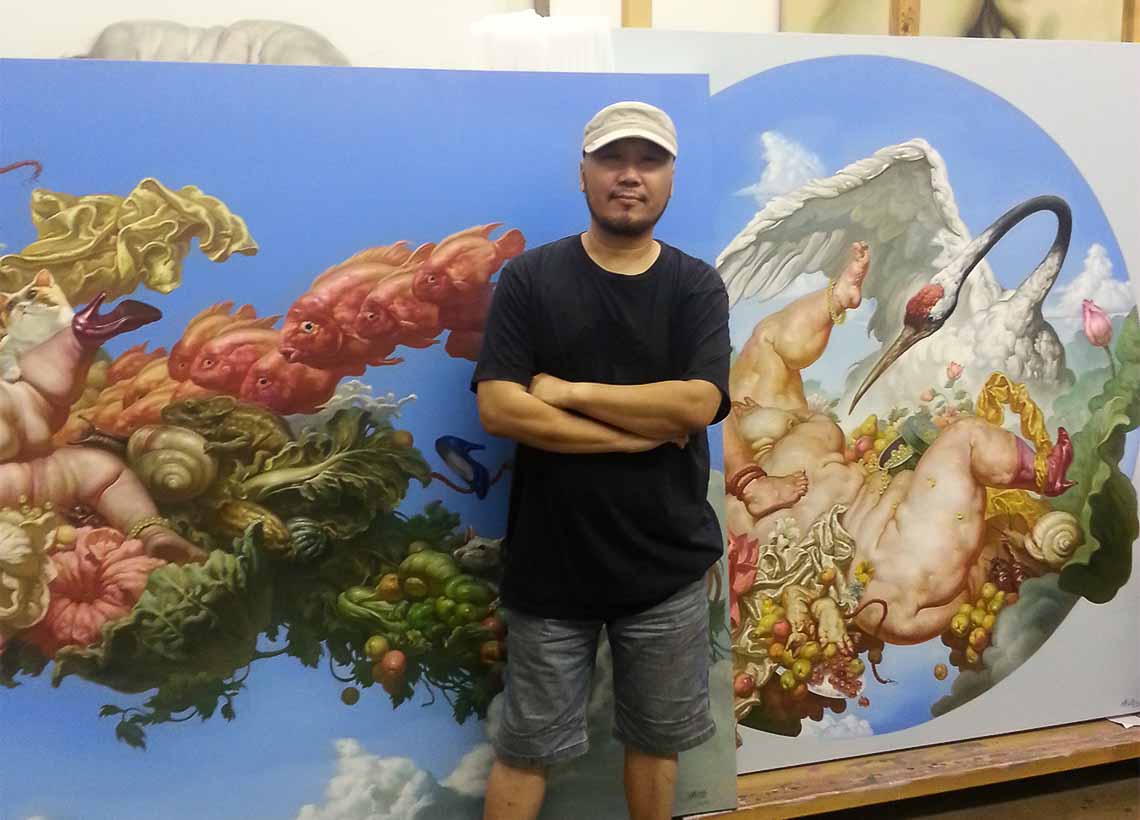 Chinese artist Fu Lei was born in Beijing, China. He established his studio in the 798 district in 2002 and continues working there today. The artist known for his plump figures speaks to us about his creative process.

Could you please tell us a little bit about yourself and your family background? What brought you to become an artist?
I was born in Beijing and grew up in a military community with my family. My father was a naval officer and my mother was a soldier. During the Cultural Revolution, we were repatriated to our hometown for political reasons. My father hired an art tutor to teach me painting when I was in high school and the early years of art enlightenment were practically forced on me.
However, I slowly developed a real interest in art as I participated in more and more adolescents’ painting exhibitions. By the time I graduated from high school, the Cultural Revolution had not come to an end yet. Therefore, I had no choice but to work in the farm in the rural areas. But I never gave up practising painting and eventually, I was admitted into the art department of a university. It made art the focus of my life and that was the beginning of my true love for painting. I became an art teacher after my graduation. After participating in the first National Youth Art Exhibition in 1985, I decided to quit my job and became a professional artist.

What is your creative process like? We noticed that music is always playing in your studio.  Is music a source of your inspiration?
There is nothing special about my creative process, I simply follow my feelings and consciousness. The creative process encompasses two stages – the stage of thinking and the stage of action. I focus more on thinking as I believe it has more guiding force and significance.
Playing music in my studio helps me flee away from the real world and escape into a realm of illusion. I like to plan my artworks in such a state because by blocking out the living reality, I would have a better imagination.

We are amazed by the vivid colours and imagination in your paintings and drawings. Where does your inspiration come from? Do the cranes and lotus have any significance?
I am always against the kind of non-technical and gloomy visual forms. I deliberately choose the classical style for my pencil drawings and oil paintings mainly for two reasons. First, it is suitable for the ideas I want to convey. Secondly, I am obsessed with the classical techniques. In terms of colours, I consciously remove the dark colours in the classical style to make my paintings more contemporary.
The inspirations of my creation come from the freedom of not fixing my mind on any culture, region, pattern or even species. Only a free and open mind can stimulate endless imaginations. I always want to express the concept of great desires in my artworks. For example, I juxtapose plants, animals and human beings without hierarchy or distinction. They have a common value of existence and together, they are a great body of lust. The cranes and lotus also serve as basic elements to deliver this concept.

Plump human figures appear as a constant subject in your artworks, oil paintings and pencil drawings. What is the story behind those people?
In my opinion, the obese bodies manifest the excess of desires. I choose such figures to express the concept of great lusts. I don’t think the fat body is different from an apple, a lotus or a ladybug in any way. They are all products of desires and they are equally valuable.

We have noticed you only started creating pencil drawings in the recent years. Is there any particular reason why you choose this medium?
Even though I only worked on oil paintings since my graduation until 2008, I have always loved pencil drawings. Very coincidently, I saw a small pencil sketch I did a long time ago, and it triggered me to sprout the idea of a whole series of pencil drawings. I am very sensitive to the delicate feelings brought about by pencil drawings. The exquisite layering, spatial sense and depth in the portrayal of pencil drawings are exactly what I need for the classic style I choose to convey.

As one of the first few artists to move into the 798 district, did you expect it to become the biggest art landmark in China today? Does this dramatic development in the working environment affect you as an artist?
My studio was established in the 798 district in 2002. One could say that I am one of the first artists who moved there. I chose the location simply because the architecture was fitting and I never thought about what the district would become in the future. Maybe it is now considered as the largest art landmark, but in my opinion, it is nothing but a popular culture centre or a hot tourism spot. Being an art landmark has nothing to do with its significance in art and it does not affect us as artists. In fact, there are not many artists left in the 798 district today and I am only staying there because my studio is in a hidden location and is relatively quiet. At the same time, keeping myself on the edge in such an independent state is really conducive to my creation.

If you could place your studio anywhere in the world, where would you go?
Paris in France or Geneva in Switzerland.

If you could meet any artist, alive or dead, who would you choose to meet?
There are so many artists I would love to meet. If I have to name only one, it would be Peter Paul Rubens. He is such a brilliant artist.

If you were to be born as a plant or animal, what would you want to become?
I have never thought about this but I don’t think it would matter whatever I became. The existence of any species is equally valuable and meaningful.

What is your favorite city/music/food/book etc? Do they give you inspirations for your creation?
I love Paris for its comprehensive classical art.
I enjoy piano concertos by Bach and Rachmaninoff. The former has a very rational nature while the latter has such a romantic character.
Chinese noodles are my comfort food and they are what my stomach is used to since my childhood.
I love reading the Chinese Zen classic ‘The Platform Sutra of the Sixth Patriarch’ and books by American art critic Susan Sontag. They both taught me how to be open and free.