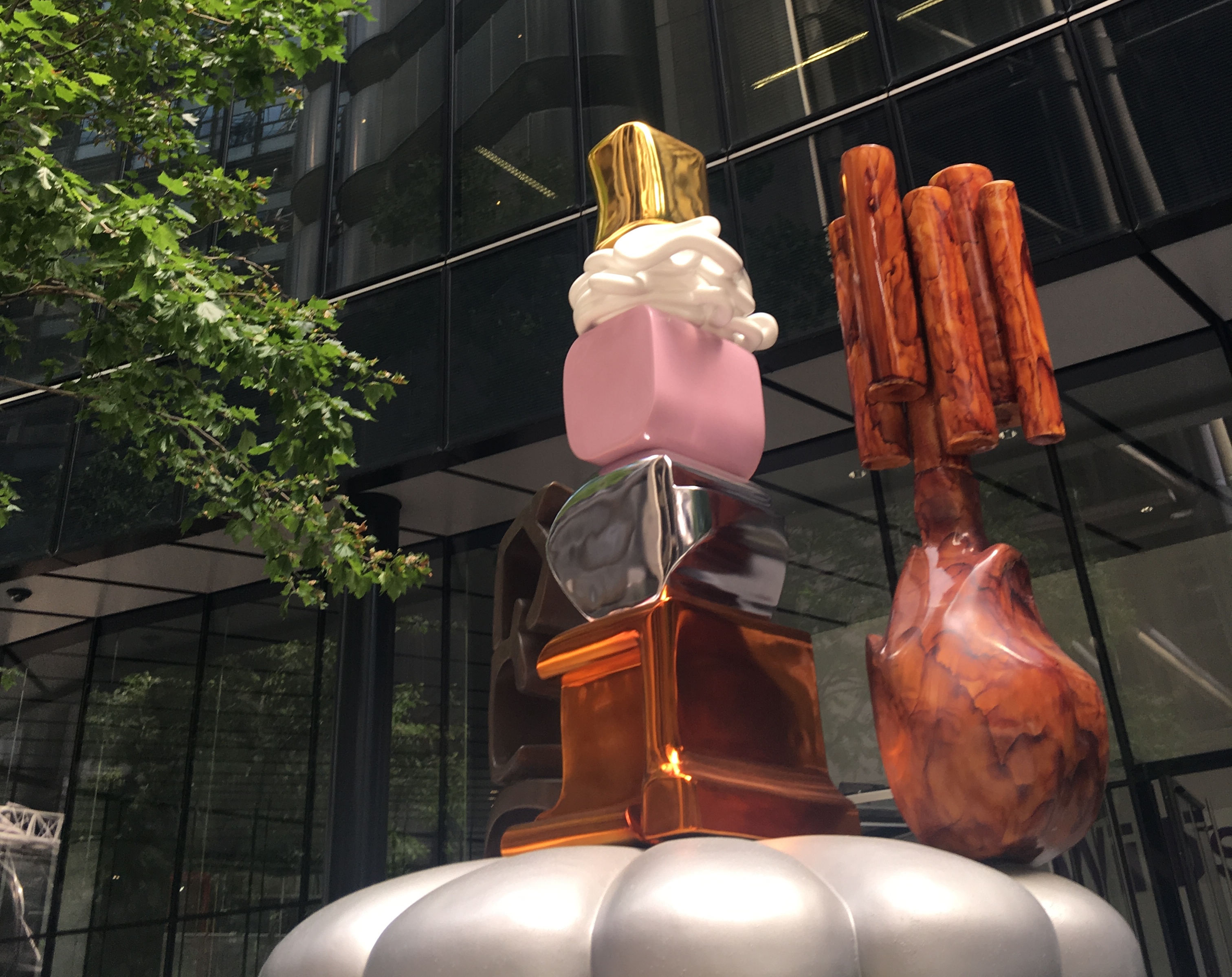 Sculpture in the City

Sculpture in the City returns to the London Square Mile for its seventh year, showcasing the work of 16 big names in the art world, including Damien Hirst.

Each year a selection of large scale, disparate sculptures are installed amid the sky scrapers of the City of London. This year, Sculpture in the City features on the Transport For London Summer Art Map, which, alongside public art in London Underground stations and on Trafalgar Square’s Fourth Plinth, includes the newly installed Frieze Sculpture Park.

While the Frieze Sculpture Park is located inside the spacious and peaceful enclave of Regent’s Park, Sculpture in the City is situated within one of London’s busiest working districts.

Project co-director Stella Ioannou tells ArtAndOnly: ‘We install in a very urban, active environment and so installation must be organic and reactive with what’s happening in the area’.

This is no easy task; the extreme weight of the sculptures (the heaviest at just over six and half tonnes) means that a fleet of cranes were needed, and installation could only get underway at weekends when the City is quieter.

The project exists thanks to partnerships with the businesses in the area, who kindly support the exhibition. These include Bloomberg, Aviva and Hiscox, along with countless other firms, who benefit from the vivid array of artworks that brighten up the daily commute.

Securing the work of Damien Hirst was an impressive achievement for the project, although not all that surprising given the first work acquired for the project seven years ago was an Anish Kapoor. Since then, some of the most successful contemporary artists have been included, with this year featuring works by Martin Creed, Gavin Turk, and Mark Wallinger to name a few. Temple (2008), Hirst’s seven metre tall supersized anatomical figure, is located just outside one of the oldest markets in London, Leadenhall.

‘What’s interesting about this site is it’s quite a domestic environment, then you look up and you can see the Walkie Talkie peering down, and the Lloyds and Willis buildings behind that,’ comments Ioannou.

Indeed, the surrounding period architecture is aplenty, some of which dates back to the 14th century. The domesticity also derives from the evolution of this area as the tailoring district of the city. When asked if this had any significance within the curatorial decision, Ioannou jests that she hoped the tailors might make a 21-foot-long suit for the sculpture. All jokes aside, the curators believe it felt right to have Temple tucked away, rather than prominently positioned like other artworks on Bishopsgate, as it allows for high impact. From observation, the directors have seen the extent that the piece does stop, shock and surprise passersby.

Ioannou is also very pleased with the levels of engagement with the work: ‘It’s fascinating to hear how many people, after seeing the sculpture, will go and read about it.’

The display allows people who might not otherwise visit a gallery to be exposed to contemporary sculpture.

‘That’s really what the project is about, allowing the everyday person, whether it’s somebody who comes into work or visits the city, or is just wandering around, to experience the space in a different way’, concludes Ioannou.

Sculpture in the City runs until May 2018. A map can be accessed here: https://www.cityoflondon.gov.uk/