Painter Hervé Di Rosa is one of the founders of Figuration Libre - literally translated as “Free Style” - an anti-establishment French movement of the 1980s akin to Bad Painting and Neo-expressionism. The group exhibited alongside American peers Keith Haring and Jean-Michel Basquiat, wielding a graphic, populist vernacular with a striking urgency. Di Rosa renders his satirical subjects in a disarming, illustrative style, more rambunctious cartoon than prized portraiture. Whimsical chimeric characters often crowd the picture plane, engaging in riotous, even vulgar activities, partaking gleefully in no more than the narratives we have written for ourselves. Often bastardising the human figure to critique the excesses of society, his most iconic character is a reductive yet straight-talking representation of humanity as flesh-toned globules with only an engorged eye and mouth, as mere bodies of consumption. Di Rosa’s populist signature propagates across multimedia, including installations, animation movies and publications, in an oeuvre that is as unapologetic as the characters in them.

Born in Sète, France in 1959, Di Rosa has pursued a relentless and unapologetic approach to explode the bastions of high art. He was awarded the Medicis Foundation Prize, and has received recognition at the events such as the 5th Biennale of Contemporary Art in Lyons, France; the 2000 Biennial of Prints in Cairo, Egypt; Miami Now at the World Arts Building, Miami, USA; and was one of the artists featured on billboards across France in La Rue aux Artistes by Viacom Outdoor. Di Rosa has exhibited extensively across Europe,at the Grand-Palais, Paris; Museum of Groningen, Netherlands; Musée d’Art Moderne de la Ville de Paris; Centre d’Art Contemporain de Flaines, Cluses; as well as in Venice, Saint-Etienne, Avignon, Helsinki, Brussels, and Istanbul, amongst others. Di Rosa’s exuberant style is particularly well-received in Mexico, exhibiting at the Museum of Contemporary Art, Oaxaca before touring the cities of Monterrey, Merida, Puebla and Mexico City. To cultivate the movement he helped found, in 2000 Di Rosa conceived the International Modest Art Museum (MIAM) in collaboration with the city of Sète to exhibit works in the tradition of kitsch and Figuration Libre. The artist currently lives and works in Miami and Paris. 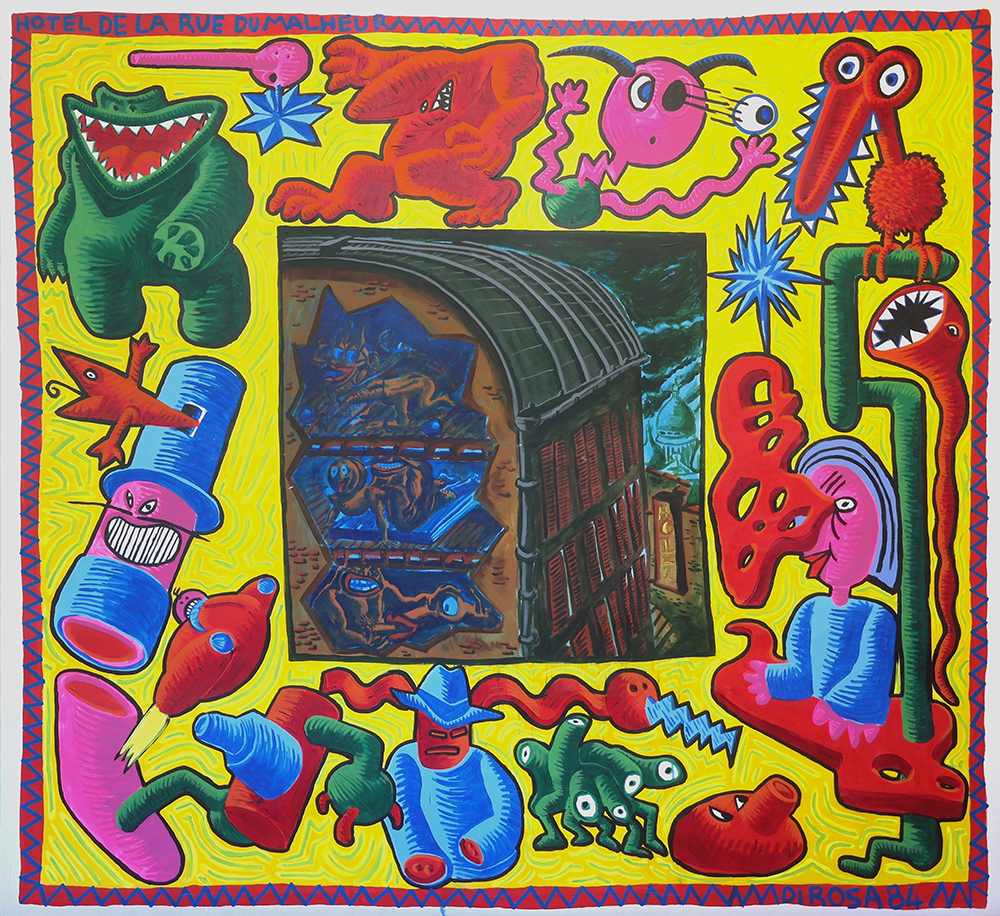