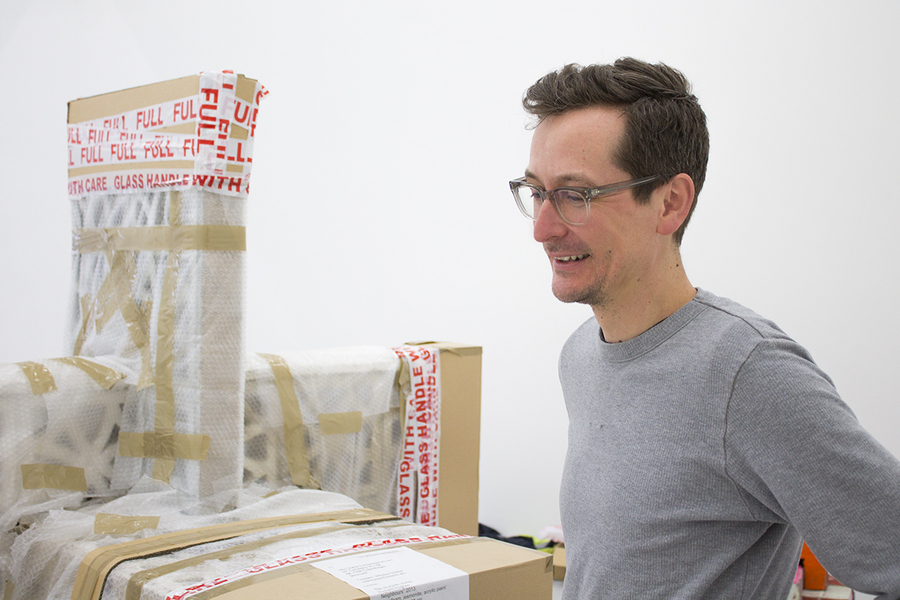 Born in the outskirts of Birmingham in 1974. Lives and works in London. Gratuated from Goldsmiths College, London. Nominated for this year’s Beck’s Futures award.

Richard Hughes makes intricate illusions that trick the viewer while, at the same time, laying their arti ce bare. His sculptures and installations resemble the aftermaths of good times gone sour. Bags of jettisoned old clothes, rising damp, burnt-out hedges and surreptitious bottles of urine – dog-end residues which hint at elaborate histories. Culturally speci c, his works tap into shared memories and the bittersweet feelings reserved for things past their best while revealing themselves to be shams.

Richard Hughes’ work is a fascinating play on what we see and what we think we see. His sculptures often take the form of three-dimensional trompe l’oeil, cleverly re-crafting found objects to create an illusionary visual presence. Shapes such as faces, a tongue, closed or open hands and effects such as lens are recreated through a combination of materials incongruous to any faithful effort of simulation. He constantly shifts the status of objects in a process of double illusionism that, like double negatives, cancel each other out and appear almost as a concrete attempt to reverse the economy of representation.