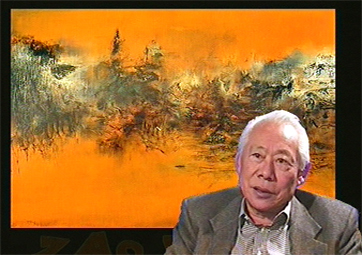 Zao Wou-ki has been hailed as one of the greatest Chinese artists of the 20th century, and it is not difficult to see why. His paintings are an amalgamation of Western aesthetics and Chinese calligraphy techniques – a true albeit implicit depiction of his personal cross-cultural experience and identity. His works in the 1950s were greatly influenced by seminal painter Paul Klee, but traveling to New York, Hong Kong and Japan in 1958 gave rise to his distinctive artistic philosophy and vocabulary. Zao’s oeuvre reflects deeply his unique perspective as an artist –well versed in oil paints and ink, he uses them deftly to achieve an admirable level of luminosity. His choice of hues and tones bring out the dramatic yet quiet splendour of his compositions, which are often pregnant with meaning and imbued with the poetic beauty of nature.

Born in Beijing in 1921, Zao Wou-ki studied at Hangzhou’s Academy of Fine Arts at the age of fourteen. He left China just before Mao Zedong’s 1949 revolution, arriving in Paris in 1948. Over the years, he became highly acclaimed – his works were even praised by contemporaries Picasso and Miro – and garnered a sizeable following of collectors as well as countless awards. His works were exhibited in China, France, Japan, the United States and Spain, among other countries. In 1981, he had his first retrospective in 1981 at the Galerie National du Grand Palais. Now ninety years old, Zao has stopped creating works, which explains the high demand for his paintings from earlier years. The artist presently lives and works in Paris, France.