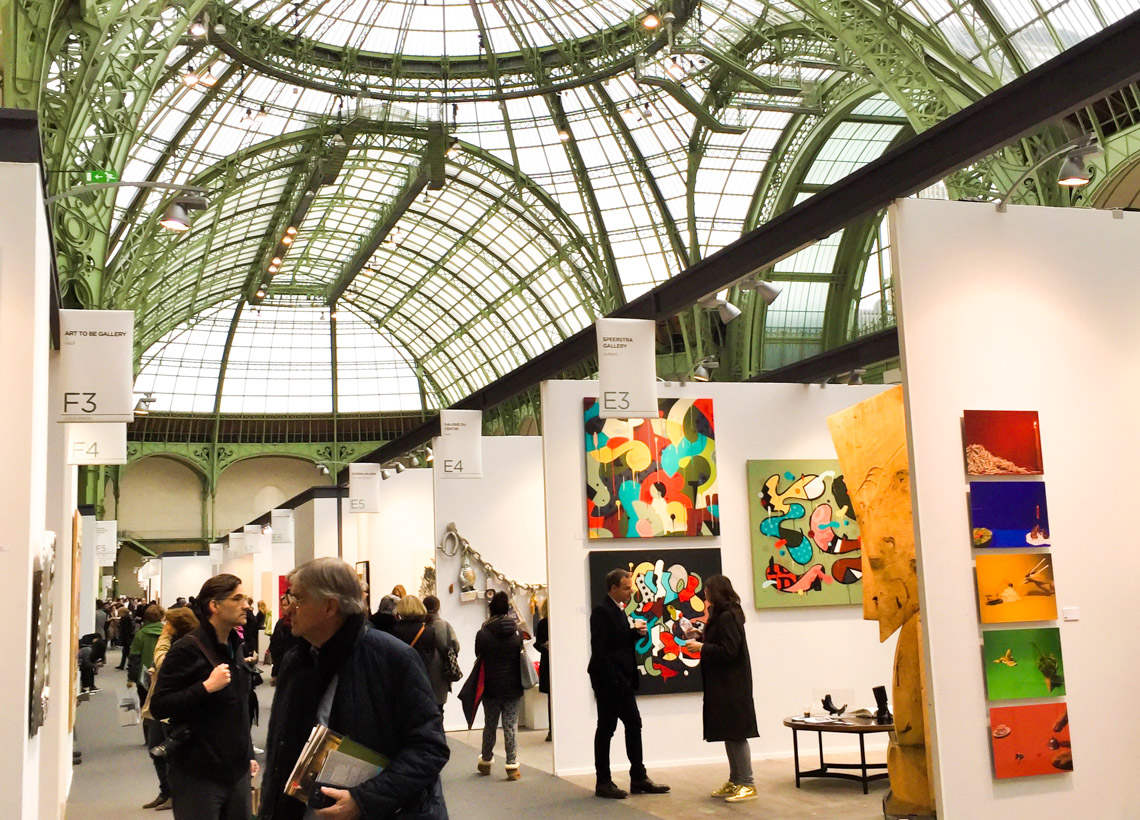 As a leading art fair of modern and contemporary art at the Grand Palais, Art Paris Art Fair recently exhibited the select works of 143 galleries. With a special focus this year on South Korea, referring to them as a guest of honour, a truly international selection of galleries and their corresponding artists where formally introduced. The curatorial perspective was organised by guest curator Sang-A Chun, the programming director at the Korean Cultural Centre in Paris.

As a participator of the Korean selection Park Ryu Sook Gallery had amongst others, the reputable works of Kim Joon on display which ranged from €15,000 – €30,000. The cleverly faux photographic works have already aroused collectors and established themselves an international market. Adhering to numerous inquiries about the progressive graphic work, a never-ending flow of interested enthusiasts kept flocking by. Likewise, newcomers such as Christine Park Gallery who was participating in the “Promises” section – an aspect of the fair which solely caters for emerging talents and features 12 young galleries – also shares the excitement for the art-loving crowd. As is known in Paris, art fairs definitely gather a healthy number of visitors. Showcasing the works of Korean sculptor, Gunwoo Shin, and the intricate paintings of British artist Dan Hays, Christine Park shares her opinion on the status of today’s art fairs.

“We have a lot of art fairs nowadays and this is what causes dilemmas to galleries and artists alike. Artists feel rather uncomfortable when confronted with this exaggerated commercial hype, and galleries worry about their budget and the necessity of breaking even. At the end of the day attending an international art fair is like attending university – you always try to aim high and get into the best place. It’s all a fight to achieve recognition. As a young gallery, I need to be active in the commercial scene.”

As is customary in the fair’s ideals, to make contemporary art available to the widest audience possible, additional participants from Azerbaijan, Colombia and Iran have further strengthened the fairs “cosmopolitan regionalism” objective. The ongoing emphasis to support the aspiring art scenes of cities such as Marseille, Milan and Zurich also retain their prominence. Newly engaged gallery, Espace L based in Geneva alternatively displayed the transnational influences of three individually iconic artists, Catherine Rebois, Vivianne van Singer and Fabianna de Barros. The aim was to mix cultural perspectives and initiate fresh incentives.

As the last of the trilogy of editions aimed at better understanding the artistic perspective of the East, a new agenda of artists and complementary activities introduced its visitors to works dating back to the 1960’s. With twenty solo shows dotted around the fair mainly featuring works by female artists, the emerging trend was not one to be ignored.

As a playground for renowned galleries such as Sundaram Tagore or Daniel Templon Gallery, and the freshly initiated younger participants, Art Paris Art Fair 2016 explored all sub-genres that constitute contemporary art. With a growing number of notable galleries attending year on year the fair was one that can’t be missed.