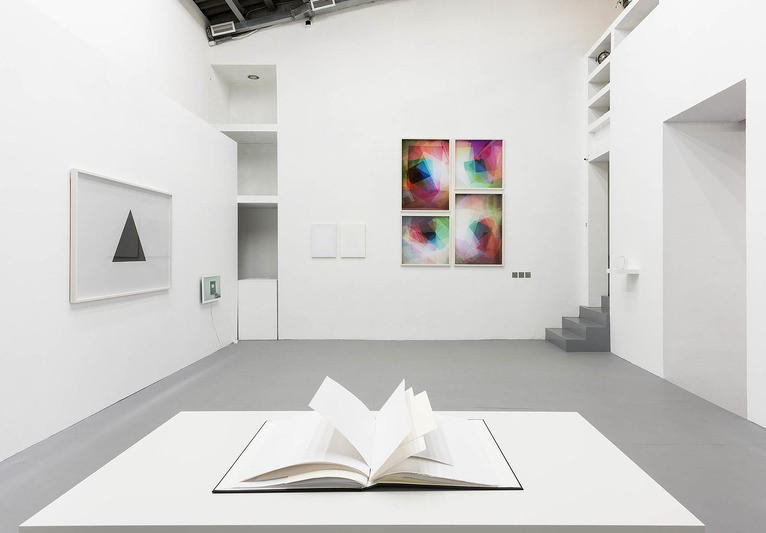 Osnova Gallery in Moscow is a young and dynamic art space founded in 2014 that provides a vital platform for emerging and mid-career artists from countries worldwide. Osnova strive to bring new artist names to the forefront of the contemporary art scene, and engage extensively with the local community of the Winzavod art-cluster. Their current exhibition, Code, takes the form of a group show from Brazilian artists Sandra Cinto, Carla Chaim, Albano Afonso, Carlos Nunes and Ding Musa.

ArtAndOnly are particularly excited about this exhibition as the presented notions of Code draw on internationality and shared universals – a recurring ethos within a site exhibiting such a wide selection of international artists.

The mixed media show explores the idea of concealed information through the medium of signs, and the complexities involved in secretly transferring accurate messages allied with the process of decoding. Each artist presents their own perceptions on coding, the result being a diverse and inquisitive exploration of ciphering.

Whilst those that tend to be exhibited at Osnova are emerging or young artists at the beginning of their careers, Code displays the work of five Brazilian artists, prominent within the Brazilian art community, but still in the process of developing international recognition. The correlation between Russia and Brazil’s approach to coding is identified through the collision of the two countries in one space.

The works as a unity appear abstract in form and allude to early modernism. They range from the vibrant, rainbow inkjet prints of Albano Afonso to Carlos Nunes’s tranquil ‘Plain white papers on wood’. In conversation with each other the pieces create an equilibrium that seamlessly blends art, technology and scientific discoveries.

Sandra Cinto (born in 1968, Santo André) is one of the most famous Brazilian artists. Her works are represented in museums’ and galleries’ collections all around the world, including the collections of MoMA (New York), Albright–Knox Art Gallery (New York) and Museu de Arte Moderna in Rio de Janeiro. Using drawing as the basis of her creative work, the artist extends its laborious technique to other types of media she works with. Sandra Cinto portrays captivating power of nature, its connection with human.  Simultaneously she creates a metaphor both of universal human course of life and of her own. Sole exhibitions of Sandra Cinto were presented in CAAM Centro Atlántico de Arte Moderno in Madrid (2014), The Oscar Neiemeyer  in Curitiba (2014), in Instituto Tomie Ohtake in São Paolo (2010) and other museums and galleries of the USA, Brazil and Europe.

Carla Chaim (born in 1983, São Paolo) uses her own body as the main instrument for producing a work. What important for her is not the extreme research of body’s limitations but the process of creation of works and poetics of this process. Carla Chaim aims at reflecting upon what she creates. She is interested in the underlied concepts of her works. Carla Chaim uses different artistic forms: drawing, installation, sculpture and video. She participated in many group exhibitions in Brazil and the USA, including “Os Primeiros Dez Anos” (Instituto Tomie Ohtake, São Paolo, 2010) and “Impulse, Reason, Sense, Conflict. Abstract Art” (CIFO, Miami, 2014).

Albano Afonso (born in 1964, São Paolo) creates photographs, installations and objects in which he gives light a sculptural presence. The artist explores its ability to both change forms of things by creating an illusive image and reveal concealed. Albano Afonso  works in the traditional genres of art as still life, landscape, vanitas reformulating their abilities of representation of light and shadow. The artist participated in I International Biennale of Photography in São Paulo (2014). His works were exhibited in CAC Contemporary Arts Center (Cincinnati, USA), in Casa Triângulo (São Paolo, Brazil), in CAB Art Center (Brussels, Belgium) and in other galleries and museums of Europe, Brazil and the USA.

Carlos Nunes (born in 1979, São Paolo) aims at using all of the options of material he works with. His photographs, sculptures and installations becomes the research of the material. Especially he is interested in its form. The works of Carlos Nunes are comparable to scientific investigations that has to be empirically verificated or theories that has to be proven as if they demostrates something which hasn’t been discovered yet. He participated in such solo exhibitions as “Triunfo das cores, amor e música, sobre os maldosos azuis” (Centro de Cultura Britânica, São Paolo, 2010), “Até o fim” (MAC Curitiba, 2009) and “Amarelo” (Espaço Laika, São Paolo, 2011).

Ding Musa (born in 1979, São Paolo) explores the abilities of representation and our perception of image, especially photograph. The artist is interested in reflection on the process of image construction. In his works Ding Musa plays with perspective, focus, narrative, point of view and filters that can changes our visual perception. Musa’s works were exhibited in Galeria Raquel Arnaud in São Paolo and participated in Brazilian festivals «ArtRio” (2016) and “SP-Arte” (2017).

One thought on “CODE at Osnova gallery, Moscow”