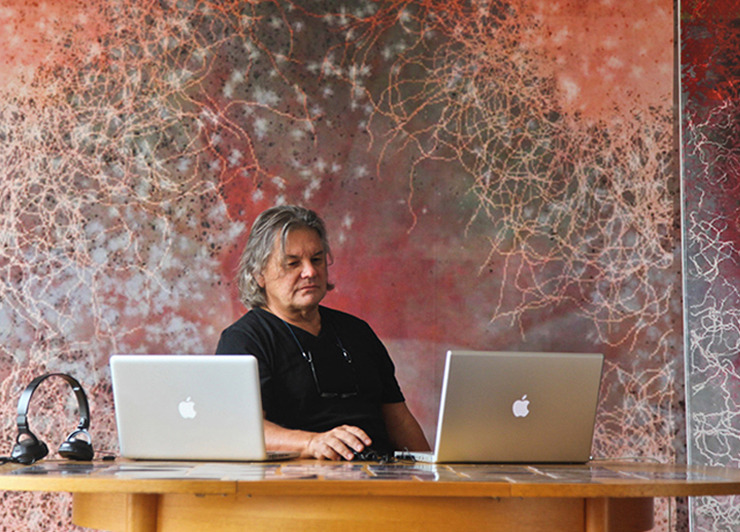 Joseph Nechvatal is an American post conceptual digital artist, whose works use computer technology to create vibrant paintings and animations. In particular he has used custom made computer viruses to confront perceptions of reality, and draw parallels between art and technology. He is also an art theoretician and has written numerous works on topics of virtuality and artificial intelligence. He talked to Le Journal about the how digitalisation has reawakened the medium of painting, his traditional inspirations and his work in the Venice Biennale.

Did you always know you wanted to be an artist?

No, I was more interested in rock music in high school. I played drums in a rock band and I thought of myself as more of a musician. But I liked drawing on the side. I never would have identified myself as yearning to be a visual artist back then. I wanted to be either a rock star or a lawyer because I also had strong political interests connected to the social liberation movements of the time. So in college I started studying sociology. But one summer night I was driving a motorcycle around Chicago in a deep funk. I happened to see the light from a beautiful stained glass window shining in the corner of my eye, and a voice spoke to me saying: “Be an artist.” I’m going to assume it was my unconscious mind speaking to me. I mean, I’m not a schizophrenic – I’ve never heard voices again. So I’m going to assume it was sort of a combination of my emotional state and the sound of the motorcycle. But I had an acoustical perception of those words and that caught my attention and changed my life. I decided I should first go around and photograph stained-glass windows in Chicago. And I did. I don’t know really why, but I did, and I followed up on that by taking art courses at Southern Illinois University in which I did very well.

What made you interested in working with digital technology?

In the 1980s the subject matter for my drawings and photo blow-ups was ideology. In the mid-80s I could see how computers would be soon dominating ideological space. So in 1986 I made my first digital works: computer-robotic paintings based on drawings first – and then a saturated persona I created called The Informed Man. Subsequently in 1992 I got into computer programming at the Saline Royale, Arc-et-Senans in France where my body of previous work became the subject of my first computer virus attacks. This with the help of Jean-Philippe Massonie at the Université de Franche-Comté. I showed some of these virus computer project paintings from 1993 in Paris again last year and I will be showing them for the first time in New York City this November at Galerie Richard on Orchard Street.

How do you think formal art training influenced your work?

It definitely gave me art skills and a work ethic, but most importantly it is how I developed my eye. Traveling and looking at art really is important. My first trip to Italy and France in the 1980s really helped me develop my own taste and style.

What inspires your work?

Our times. Of course when I think of our digital age I think of the fluidity of the internet, the networked connectivity, the flows of data, which is one of the reasons I got interested in cyber-culture in the early 90s. It seemed like a possible platform for transformation. The digital folded me back into my interests in the Classical Greek poetry of Ovid’s Metamorphoses where things can become other things – flowers become people, and people become clouds, and this kind of super-fluidity, which we experience in dreams sometimes. It has to do with my faith in art as a poetic metaphor useful for realising our human potential in terms of sensibilities. So in that sense I’m a transcendental materialist. Actually, that’s why I became interested in the philosophy movement called Speculative Realism, because they don’t shy away from what they call transcendental materialism. Which I think kind of nails what I’ve been feeling and groping for in terms of inspiration. I think art can inspire changes in consciousness through its embodied transcendental material.

You create digital works but exhibit them in a physical space – what do you think about virtual exhibitions?

They are very important, but they over-determine the interpretation of the art in formalist terms. Of course I don’t deny the virtual immateriality that is embedded in my physical canvases, but I don’t want the virtual to be self-limiting by being overly pure and thus only ephemeral. For me, the digital has brought back from the dead the practice of painting. It has made it alive. It has made it bloom in the enthusiastic and relevant sense of the word alive. But it has made painting alive in a more specific sense also, as I began mixing my digital painting practice with techniques of artificial life (a-life). Painting must be into digital code to be, as Susan Sontag wrote in Against Interpretation, “a new kind of instrument, an instrument for modifying consciousness and organising new modes of sensibility” because our consciousness and sensibility is largely now developed by the virtual and by artificial intelligence.

How has your work developed as technology grows? Can you foresee how it will continue develop with the evolution of technology?

For me, the power of the abstracting force of artificial life and its ideology continues to be of critical interest and continues to supply art with motivational urgency. In that we live in the information age, the essential abstract political feature now is electronic reiteration and its role in creating psychological viruses (memes) within our culture. The work place is increasingly dominated by artificial intelligence. In that sense, my post-conceptual AI digital paintings are a virtual dada in their subjectivist approach towards artificial life ideology (including the rules and ideology behind the practice of computing and traditional painting) within the field of reproductive technology.

Making the concept of artificial intelligence, artificial life and virtual reality visually perceivable and emotional in a permanent way within actual natural light. This is achieved through a process of visual integration that I have termed the viractual. There, art builds a perceptual viractual space that is extensively layered, nuanced and cadenced.

Can you tell us about your favourite artwork that you have made?

Tough, almost unfathomable, choice but I will select the 168 x 305 cm painting vOluptuary drOid décOlletage from 2002 that I showed again in the eventi collaterali show Noise at La Biennale di Venezia: a show that was based on my book Immersion Into Noise. Around 2000, in aiming to succeed within the essential characteristics of viractuality, I began working on the idea of the hermaphrodite. Specifically, vOluptuary drOid décOlletage deals with a hermaphroditic pre-bifurcation moment in human development called oogenesics: a moment in the development of the fertilized egg where both female and male potentiality exists simultaneously. This moment of potentiality exemplifies my viractual noise concept brilliantly – indeed viractuality, noise and code have myth status in terms of vOluptuary drOid décOlletage. The hermaphrodite is an important viractual noise image in that it suggests the truth in life that a thing can be both one thing and its opposite: that two opposites can exist simultaneously and not cancel each other out. Such peacefully sustained conflict can be the agent of transformation and the creator of something new. Peacefully sustained conflict engages the audience in a play of contradiction and excess that encourages active critical thought and moves us away from sole positions of passive emotion. vOluptuary drOid décOlletage’s visual noise seizes a reflection from the electronic flux with which I work – a flux into which results may or may not be subsequently transformed by viral a-life infections. If a virtual moment is launched into the actual world, by being painted as with vOluptuary drOid décOlletage, it performs a peculiar incident in its own right. Through this working method I avoid seeking the pursuit of endless electronic stimulation and rather seek out grounded satiation in which the delights of the body are not subordinated to the virtual but rather dominate and shape the virtual towards the living but classical aesthetic ends of fine art painting.

You can find out more about Joseph Nechvatal on his artist website (nechvatal.net) and blog (josephnechvatal.wordpress.com)

2 thoughts on “Interview with Joseph Nechvatal”