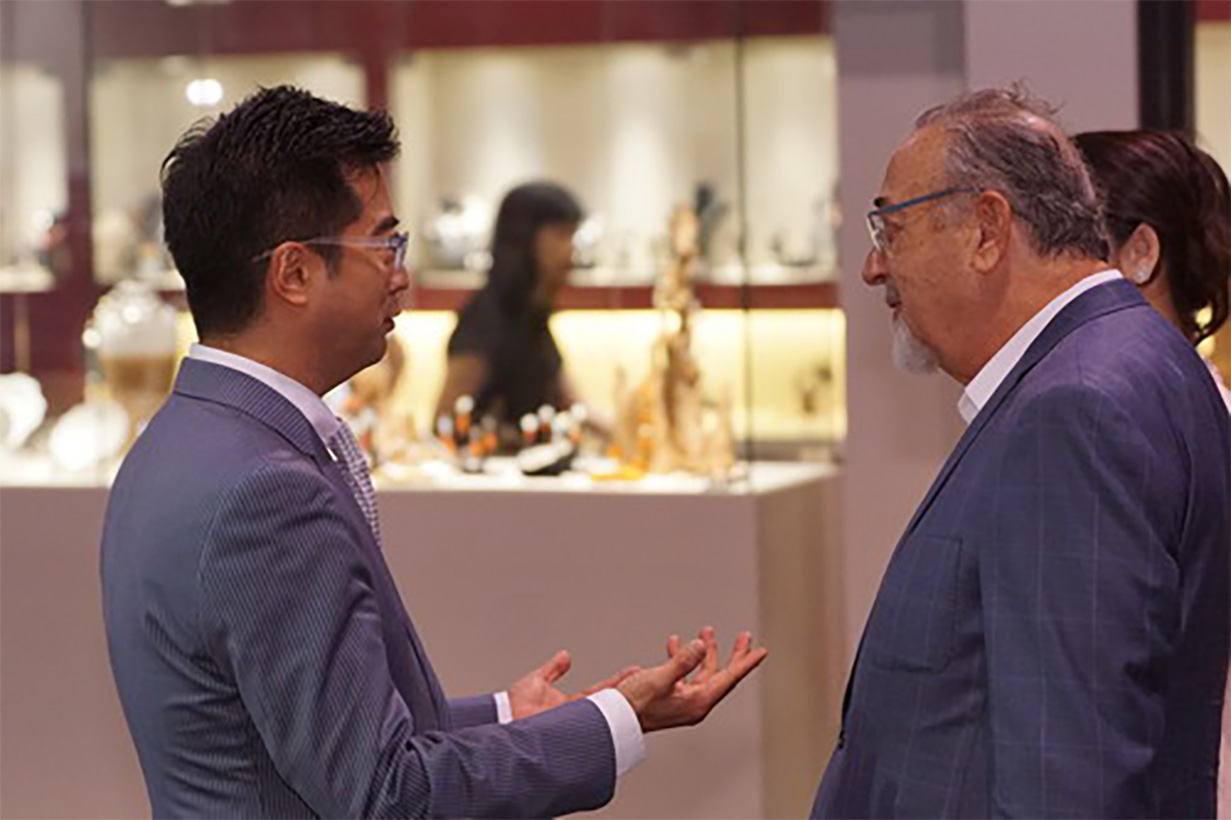 Andy Hei About the Makings of a Successful International Art Fair.

So how does one get to become the director of an art fair?
Before I started this fair in 2006, I was helping different dealers with their involvement in other similar fairs, so I started from standing in the booth and helping to hang the paintings, and slowly worked my way up. I watched everything; how people arrange, organise, and run their booths, and then in 1999 I opened up my own gallery on Hollywood Road. The gallery participated in the Asian Art Fair in New York for five years, but then I decided it was time for a change, so I went from participant to organiser here in Hong Kong

Was the focus always on Asian art during your career progression?
Well, I am the second generation of an antique business in Hong Kong. My father has been doing this for 60 years, and I’ve been in the business since 1986. So I have a history of dealing with Chinese antiques, and now I also collect contemporary Chinese art, particularly painting and sculpture.

What does being a director entail?
Well, the process to get here has meant I have taken up multiple roles while being director. Since the fair began, I have been involved in sales, marketing, advertising etc. It’s very multi-faceted, which is quite characteristic for the world of art business in Hong Kong.

There are quite a few art fairs that come to Hong Kong. How is Fine Art Asia different?
The main difference is that Fine Art Asia is produced in Hong Kong, instead of being a fair that visits Hong Kong. Historically, the few examples of homegrown fairs since the 1980s didn’t last long, due to the lack of a strong market at the time. However, today everyone talks about China’s market, which we are now able to utilize to support such an event here.

Fine Art Asia, despite its name, also hosts dealers of antiques, jewelry and collectables. How come you decided to integrate so many different facets?
From my past experience working in fairs, I realised this was quite commonplace. The first art fair I ever participated in was the Asian Art Fair, organised by Haughton from London. The fair was in New York, and had 65-70 dealers at that time. It was my first experience of seeing antique dealers in one both, and next door there would be a Western gallery dealing in Asian contemporary art. It was quite a shock to me, actually! But I realised that it works in an international market, and so I believed that Hong Kong was similarly international enough to have something like this. Plus, it is interesting to have a mix, and it encourages more visitors. Whereas an art fair that only deals with one genre cannot change or evolve, and that may be the reason for the decrease in Western art fairs that aren’t adapting their content, their layouts, etc. We have changes every year to keep it fresh, as I can’t stand doing the same thing every year.

What are your thoughts on the contemporary Chinese art market?
Well, after a decade of development of the mainland Chinese market, I feel that the divisions in the market are becoming more noticeable. People from a Western perspective are more aware that Chinese art is very different depending on its location; whether it be from mainland China, Taiwan, Hong Kong, or even South East Asia. And that’s not just the art itself, but also the way the markets work, because after so many years of being in this business, they all have different attitudes and behaviours and interests. So in the context of our fair itself, you can really observe and define the different interests to different parts of Asia.

Do you think the Western art market will always influence the Asian markets, or are they becoming autonomous?
I think the influence goes both ways. There has certainly been a historical trend of Western markets buying Chinese antiques, but now there is a growing mainland Chinese market that is starting to buy them back. Every year I am buying Chinese antiques back from my father’s clients, which he originally sold to them 20 or 30 years ago; it’s an interesting change. Plus, while the development of the mainland Chinese market has begun with collecting pieces of its own culture, it is also expanding to look at pieces from Western culture too. So the direction has essentially reversed.

Do you think Hong Kong’s location has contributed to its success in the markets?
Hong Kong is an ideal location, as not only does it have a completely free market, but it’s convenient as an intermediary between mainland China and the West. However, Singapore is also becoming an interesting city to watch, as it is also a very conveniently located port city. And it has started marketing itself as a sort of cultural capital of South East Asia, despite the city itself having a lack of history of visual culture. But the strategy seems to be working well, as the government is investing huge amounts of money in the arts scene there.