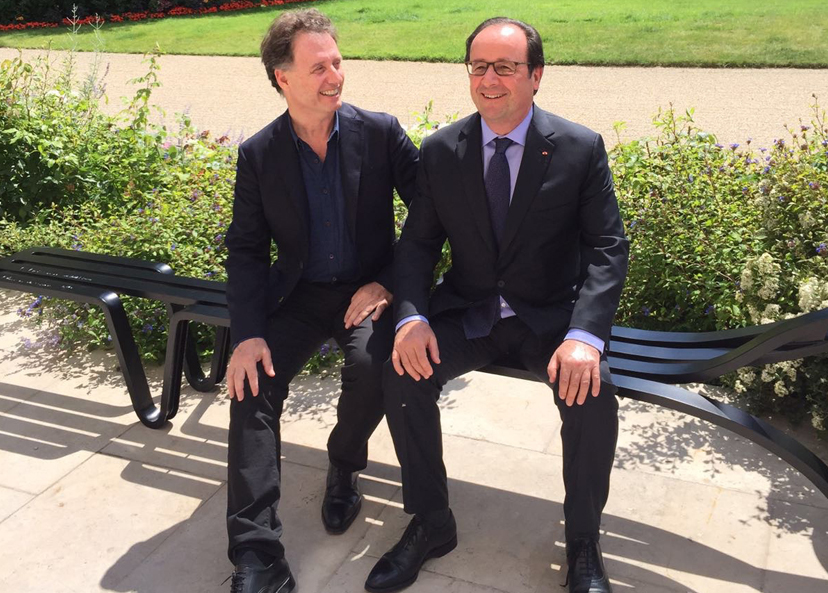 Pablo Reinoso: “At the Elysée, as always in my work, I first wanted to create a connection with the venue, this time it imposed itself, a particularly strong symbol of the Republic and France. The work is composed of two benches deploying on either side of the southern terrace of the Elysée Palace. They are built from steel beams, those used by Gustave Eiffel, those that still build our cities and factories. I decided to include in the work two symbols of the Republic, an oak and an olive tree, one represents the strength and justice and the other peace. There are more specifically the leaves of these trees that were made with the lost wax technique directly from impressions of leaves, which we cast in bronze and incorporated in each bank. Thus the two benches share a common language but are not exactly similar, they are in tension like power games.” 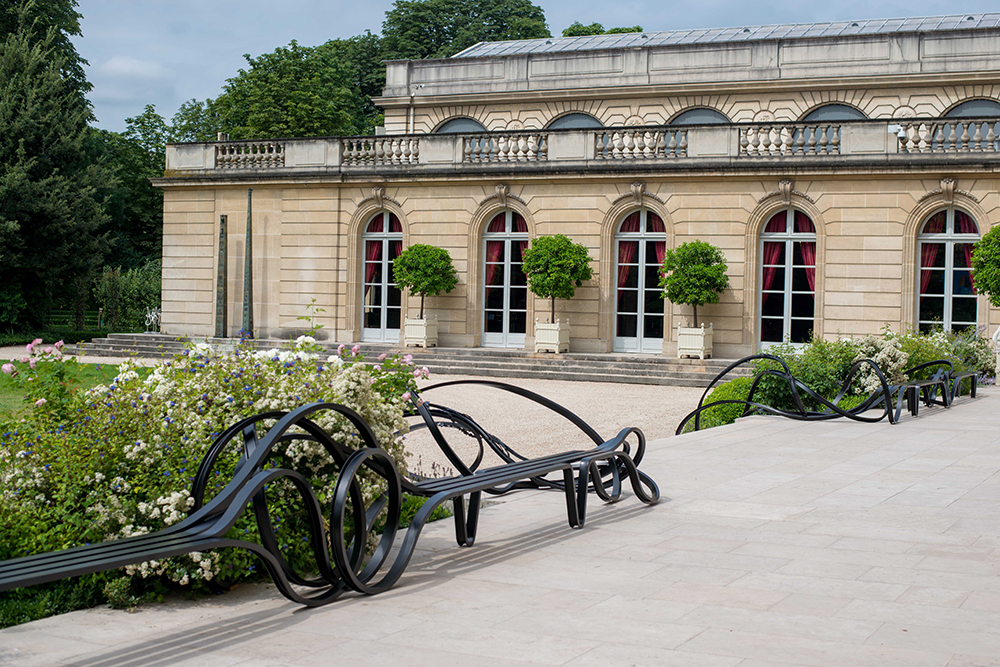 “This work that can also be used as a bench becomes a meeting point, a place for dialogue, a support to speak, to think about the heart of the Elysée Palace. It is a genuine public bench in the noblest sense of the term. The work location on the garden side acts as a natural pair to the north side of the doorstep of the Elysée, a reception and exchange scene with the world, here sculptures look towards nature, towards France.” 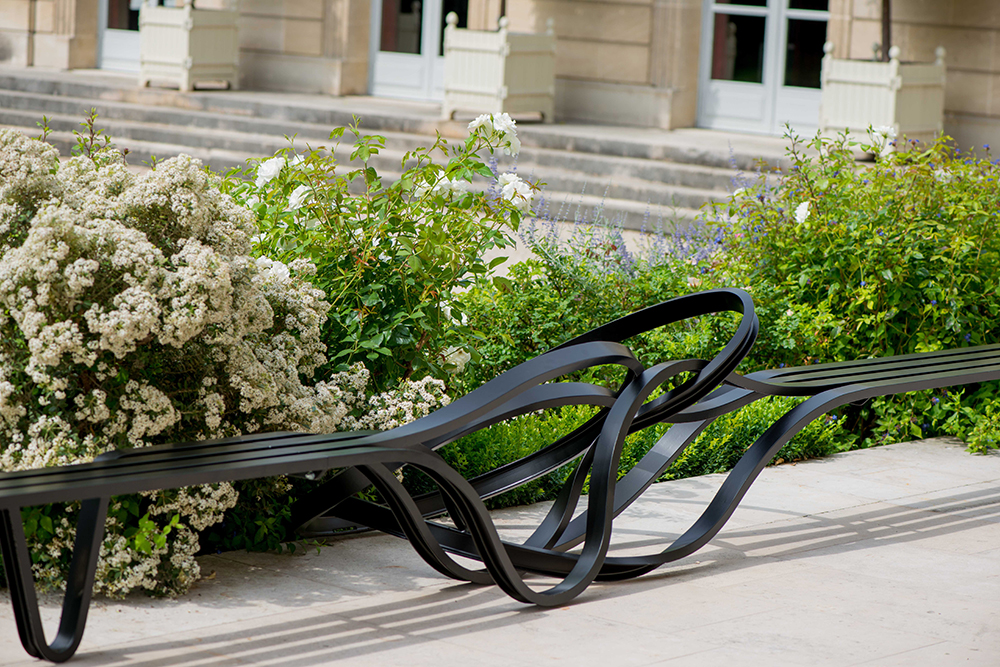 “Once the work was completed a title imposed itself Racines de France (Roots of France) to celebrate the plural roots of France in which the country will tap its dynamism, its perpetual renewal, instrument of openness to the world. The work is dated July 14, day of the national celebration and gathering point for the nation but also the year 2016, which refers to the terrible events of Nice and reminds us of our duty of memory, assistance, protection and union.” 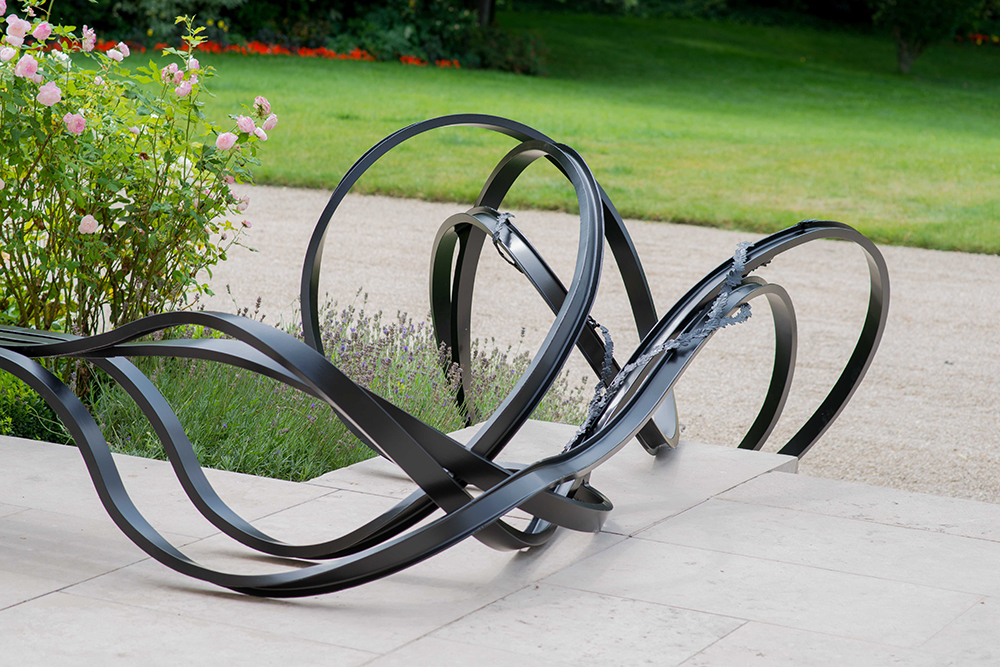 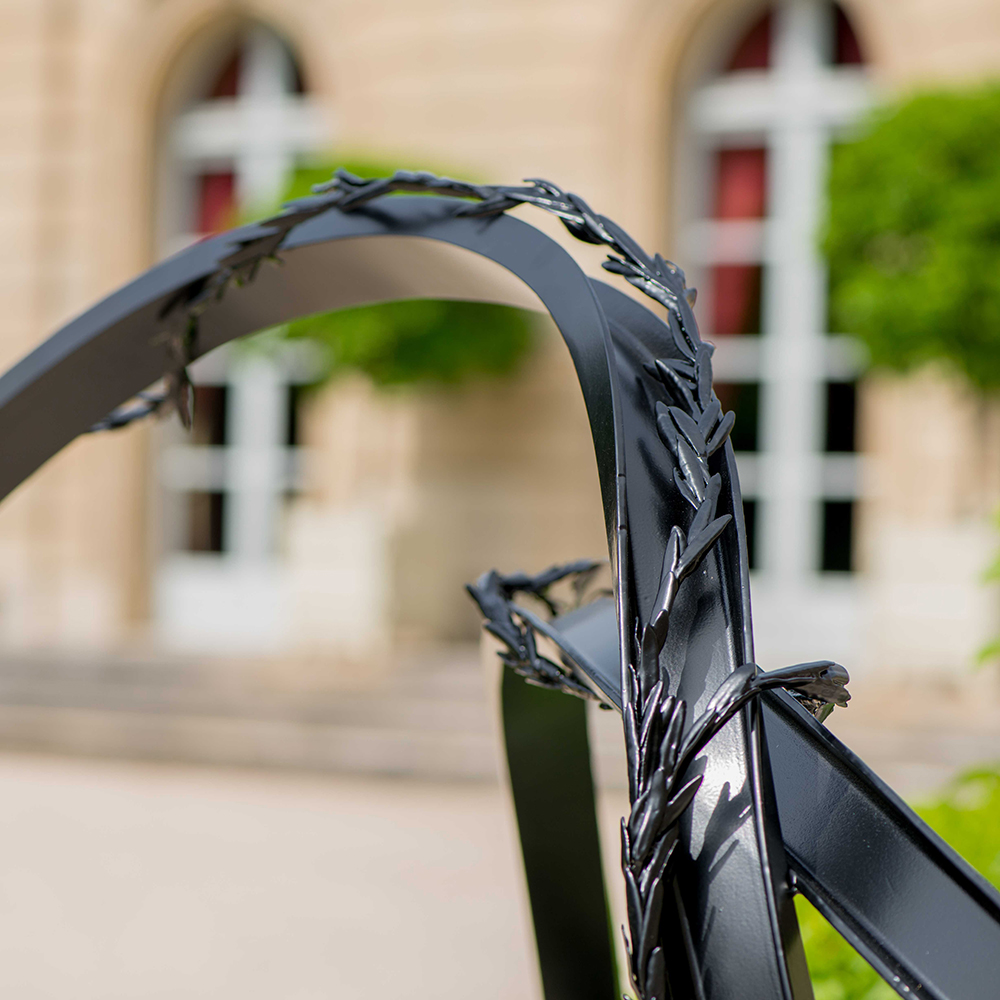 “This sculpture is also a reflection of my collaboration with the Fonderie de Coubertin, more than ten years long, with whom I share the love of the profession and of the transmission.”

“Finally this work is the opportunity to express myself in a highly symbolic and prestigious place for us all. I would like to thank the President of the Republic François Hollande for his trust and the freedom he granted me. I convey also my thanks to the Minister of Culture, Ms Audrey Azoulay and Ms Claudine Ripert-Landler who have supported me throughout this project. The idea of this work was born during a State travel of the President of the Republic in Argentina in which I participated as a Franco-Argentine artist within the cultural delegation. In Buenos Aires, the President discovered a sculpture project that I was achieving for the Embassy of France, the idea of creating a bench for the Elysée germinated at that time. ”

ArtAndOnly is proud to have a number of incredible works by Pablo Reinoso available for sale right now. Add Pablo Reinoso to your collection today.

All images courtesy of Rodrigo Reinoso

READ: The relationship between sculpture and architecture: A conversation with Pablo Reinoso

This book is the first important monograph dedicated to the work of Pablo Reinoso (b. 1955), a leading French-Argentinian artist and designer known for his Spaghetti Benches—found all over the world—and his variations of the iconic Thonet chair.