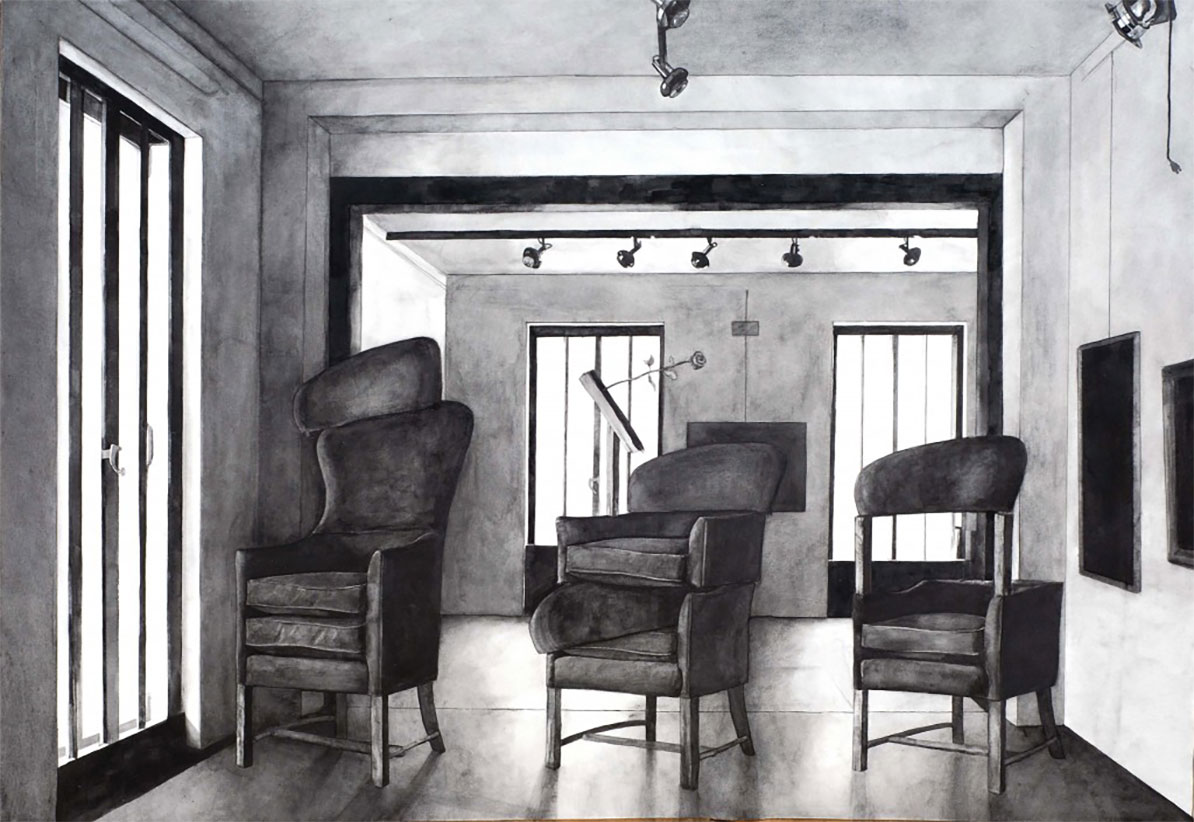 “With thought experiments the philosopher puzzles through moral conundrums. In a way these images are aesthetic conundrums where I’m playing with extremes or interjections of nonsense.” – Dane Patterson

Dane Patterson’s graphite rooms are not the kind one would feel comfortable in, even if they were, in fact, belonging to Aerin Lauder, granddaughter of Estee Lauder, or an Axel Vervoodt interior. Taking inspiration from interior design catalogues or his own photographs of grand residences, Patterson turns the manicured, immaculate domestic space on its head in his latest series Hypothetical Arrangements. In the stark, black-and-white drawings, a chair perches atop another, a mere tug away from collapsing, or is suspended in a mirror reflection, hovering ghostlike, defying all natural laws and common sense. The rooms belong to a highly aestheticized fun house, albeit one for anthropomorphic furniture, and as disquieting as it is absurd.

This mix of the playful and the disturbing has been a hallmark of the American artist, who was born in Indiana in 1978.  With a M.F.A from the School of Visual Arts in New York, Patterson would become celebrated for his unorthodox approach to the mainstays of the art history canon – the portrait and the still life. His hyper-realistic graphite drawings have earned him a string of accolades including the Artist Fellowship in Drawing, Printmaking and Book Arts, New York Foundation for Arts, McDowell Colony Residency and Fellowship, and the Louis Comfort Tiffany Foundation Biennial Competition Award Nomination.

The artist’s latest series continues to explore themes of familiarity and the routine. In an earlier portraiture series, Patterson created incredibly detailed, hyper-realistic graphite portraits of models covered in objects ranging from a snare drum to industrial tubing. The precarious permutations of items engulf the model, and draw one’s focus away from the human form to the jarring compositions of familiar, everyday items. Rendered realistically, the sense of familiarity is offset by their distorted use, eliciting responses ranging from amusement to unease.

In Hypothetical Arrangements, the human figure has been replaced by furniture as the focal point and anchor to the absurd composition. With just enough furniture in their original context to create a clear reference point, the deviation from reality is made even more jarring, forcing the viewer to reconsider the rules and systems that we create for ourselves, or have been imposed upon us.

Standing in front of these paintings, there is a tension. One cannot help but resist the independent laws that govern the scene. You may feel like righting the chair or setting down the floating cups. The friction between the hypothetical and the familiar becomes visceral. It tickles and amuses, while also unsettles. As the artist explains:

“It’s interesting to me that seeing familiar domestic objects, when positioned differently, can become disconcerting. The act of re-positioning the familiar reads as an act of violence or at least the evidence of such. A toaster is designed to rest on a surface in a particular manner, and when placed on its side it reads to us as an error. This becomes disconcerting to see the entirety of a room presented this way.”
Herein lies the paradox. As much as the compositions convey chaos, violence and a sense of somberness, the actual creative process is controlled and meditative, and is motivated by a playful desire to “mess up” these pristine spaces. While in his earlier works, the room was physically arranged, photographed and copied by Patterson, the artist now depends on his imagination to mentally augment images he has seen to produce the final arrangement.

“Humor is a motivating factor for me… As you said humor is a companion to the randomness of the re-arrangement. I remember a childhood friend’s parents’ home and their all white, seemingly untouched living room. It was like a museum and totally off limits. I still want to overturn those couches.”

In this series, the artist succeeds in overturning those couches and more, though only in his mind and on paper. These scenes are hence truly, and literally, hypothetical arrangements that become realized for us in graphite.