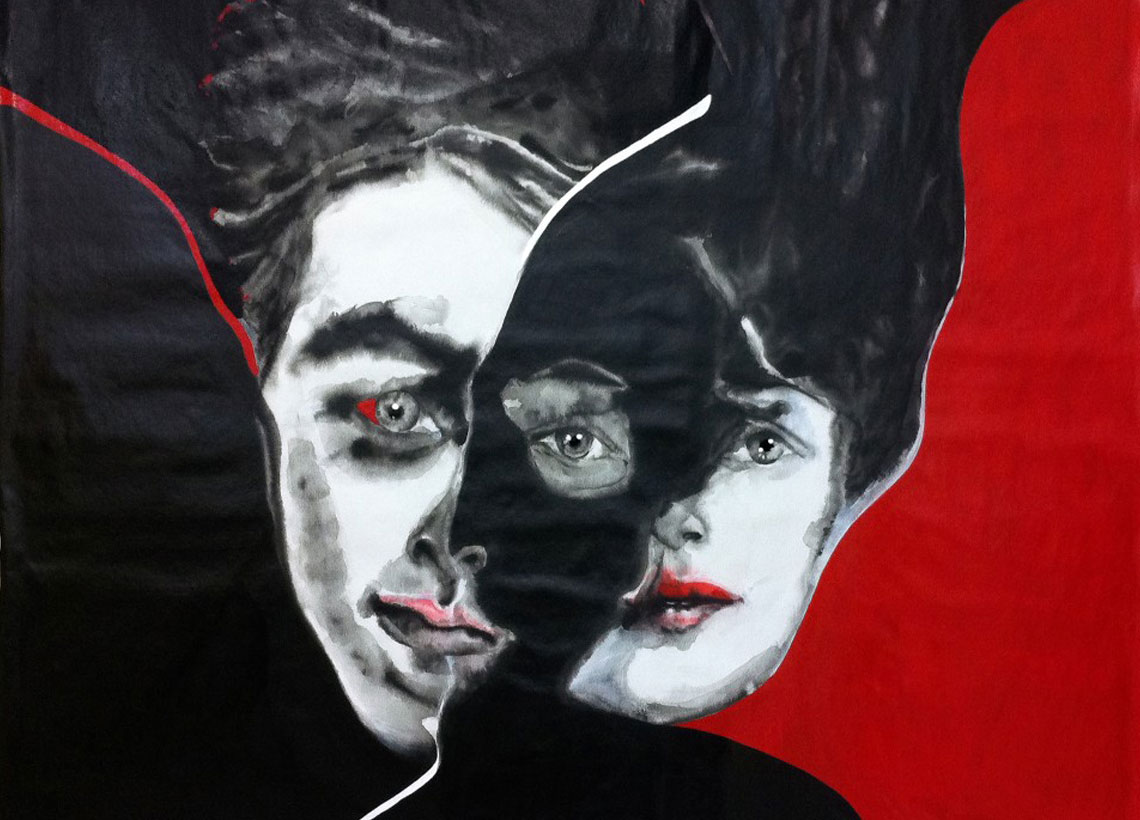 ADRIANA MOLDER: STORIES OF THE GAZE

With her dramatic technique and a talent for storytelling, Adriana Molder has crafted a strong reputation as a profound, through-provoking artist. Born in Lisbon in 1975, Molder has had a penchant for drama and cinema since her youth. This initially lead her to the theatre, where she completed a degree in stage design in 1997, but she switched gears soon after to pursue a subsequent degree in drawing and fine arts, graduating in 2002. Since then Molder has maintained a very clear artistic identity in her technique, working with black India ink on tracing paper to produce an iconic rippling effect on the paper’s surface. The subject of her work is usually the human portrait, and what can be revealed about a character through their face. These people are often inspired by characters from literature, film and folklore, but can also be drawn from her daily life as Molder crafts elaborate storylines through the power of facial expression.

Even before Molder had completed her studies in 2002, her work was already exhibited in group exhibitions at the Cordoaria Nacional (Lisbon) in 2000, the Centro Cultural de Lagos in 2001, and the Centro Cultural de Belem (Lisbon) in 2002. In 2002 Molder began to exhibit her work in major solo exhibitions such as at the Sintra Modern Art Museum, where her series Camara de Gelo [Ice Chamber] was featured. The series consisted of black India ink drawings depicting full-bodied portraits of ‘I Fantasmi’, literary characters set in a haunted museum that had been effectively frozen in time and left to linger. These characters are all entangled in the same narrative, but their evocative expression also draws the viewer in by breaking the fourth wall.

The following year, in 2003, Molder’s work was featured in a solo exhibition at the Sacred Art Museum of Funchal in Madeira where she exhibited her important series Copycat. In this series the audience was confronted with close-up portraits of the characters faces, which marked the beginning of a thematic exploration that Molder continues today. The characters of Copycat convey their thoughts through man’s most expressive feature: their eyes. With this series Molder narrowed in on the key motif that was nascent in her previous work, which is the power of the gaze as a means to tell a story.

“I usually start my drawings with the eyes. I am particularly fond of eyes, and how you see others through the eyes.”
Since then Molder has been featured in at least one major exhibition every year. In 2005 she presented Galeria de Criminosos [Rogues’ Gallery] in Politécnica 38 (Lisbon), which was a profound series inspired by criminal mug shots of the 1880s. This inspiration arose after Molder read Thomas Byrnes’ book ‘Professional Criminals of America’, and started reflecting the role of photography and portraiture in redefining a character’s identity. Men that family members and colleagues once thought were good were redefined as bad, and faces that were once familiar became hardened and distant. 2005 was also in this same year that she received an important Artist Residency Grant from the Budapest Galeria in Hungary, where her work is still shown today as part of the permanent collection.

In 2006 Molder exhibited Encontro Marcado in a solo exhibition at the Museum of Fine Arts of Asturias (Oviedo), after which she was granted a place in the International Studio Program at the Kunstlerhaus Bethanien in Berlin. She left Lisbon for good: “Life was going too well in Lisbon. I knew I had to move to challenge myself”. At the end of her residency in Berlin in 2007 Molder unveiled the series Der Traumdeuter in a solo exhibition at the Kunstlerhaus Bethanien, for which she was awarded the prestigious Herbert Zapp Prize for Young Art.

In more recent years Molder’s work has been shown in solo exhibitions at Beck and Eggeling Museum and Gallery in Dusseldorf (2011), Donopoulos IFA in Thessaloniki (2012) and Casa da Cerca Contemporary Art Space in Almada (2013). In 2012 Molder collaborated on a major exhibition with iconic Portuguese artist Paula Rego at the Casa das Histórias-Paula Rego in Cascais, where both artists created new pieces  inspired by the 19th century novel ‘A Dama Pé-de-Cabra [The Goat-Footed Lady]’ by Portuguese author Alexandre Herculano. Additionally, Molder’s work can also be found in collections at Banque Privée Edmond de Rothschild, Kupferstichkabinett-National Museum in Berlin, Budapest Galeria, Fundación Coca-Cola, Berardo Collection in Lisbon and many more.

Molder’s newer work is daring as ever, and continues to advance in unexpected directions. Her iconic black-and-white palette has evolved to include reds and other hints of colour to emphasise certain elements in her composition. This increased playfulness with colour is a highlight of Molder’s newer series The Light in the Heart and Mystery. The artist has also begun to toy with composition and form by manipulating negative space against the dense black ink. However, it is by allowing herself to be wholly consumed by the narrative that Molder continues to captivate her viewers by sharing her characters and allowing them to tell their stories through their gaze.