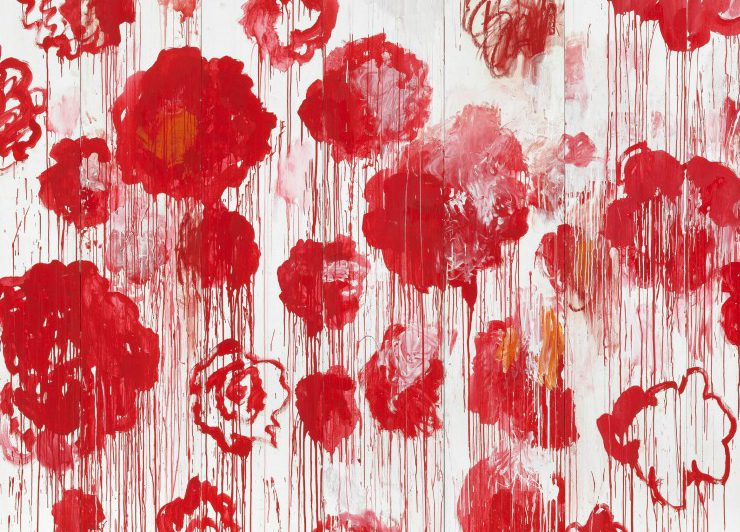 Opening now but running through to 2017 here are ArtAndOnly’s choice of 10 the best of the major shows to take you through the festive period and into 2017.

Francis Picabia: Our Heads Are Round so Our Thoughts Can Change Direction, The Museum of Modern, Art November 21, 2016 – March 19, 2017
This is the first major exhibition in the U.S. to encompass the full range of Picabia’s audacious, provocative, and profoundly influential career. MoMA’s first-ever monographic exhibition of the artist, this show brings together some 200 works in multiple mediums to explore the artist’s critical place in the history of 20th-century art.

Recommended book: Francis Picabia: Our Heads Are Round so Our Thoughts Can Change Direction, by Anne Umland

Cy Twombly Centre Pompidou Paris November 30 2016 – April 24 2017
Opening now and running until April 2017, a major retrospective of the work of great American artist Cy Twombly. Presented chronologically and featuring some 140 paintings, drawings, photographs, and sculptures, the exhibition will provide what the Centre Pompidou describes as “a clear picture of an extraordinarily rich body of work which is both intellectual and sensual.”
Unmissable.

Robert Rauschenberg Tate Modern London December 1, 2016 – April 2 2017
Rauschenberg has been a global influence in the art world and this is the first retrospective of the artist since his death in 2008. A Texan artist with a passion for the world, Rauschenberg refused to accept conventional categories of what was and wasn’t art. His quest for innovation was fired by his boundless curiosity and enthusiasm for new ways of making, from painting to performance art. Iconic works from his six decade career include large-scale pop art screen prints picturing the likes of JF Kennedy; Monogram, a paint splattered taxidermy goat in a car tyre surrounded by street signs; and Bed, soiled sheets spattered with brushmarks.

A Revolutionary Impulse: The Rise of the Russian Avant-Garde The Museum of Modern Art New York December 3, 2016 – March 12 2017
In anticipation of the centennial of the Russian Revolution and covering the period of artistic innovation between 1912 and 1934, this grand show traces the arc of the pioneering avant-garde from World War I to 1932. Bringing together major works from MoMA’s extraordinary collection, the exhibition features breakthrough projects in painting, drawing, sculpture, prints, book and graphic design, film, photography, and architecture by leading figures such as Alexandra Exter, Natalia Goncharova, El Lissitzky, Kazimir Malevich, Vladimir Mayakovsky and Dziga Vertov, among others.

An Irruption of the Rainbow: Color in 20th-Century Art Los Angeles County Museum of Art December 17, 2016 – Ongoing
This show looks at various ways that modern artists have used color in their work. Artists began to experiment with color in the late 19th century, employing it not only descriptively but also scientifically, politically, formally, and to stimulate the senses. Henri Matisse, one of the greatest masters of color, used pared-down colored shapes to explore notions of figure and ground, presence and void. Photographer William Eggleston found heightened color in everyday situations, while contemporary artists Polly Apfelbaum and Ginny Bishton bring together ordinary materials and bold color to create vibrant works of art. This exhibition, drawn from LACMA’s collection, also includes works by Sonia Delaunay, Kazimir Malevich, Morris Louis, John McLaughlin, and Ellsworth Kelly.

Wolfgang Tillmans Tate Modern London 15 February – 11 June 2017
Since the early 1990s, Wolfgang Tillmans has earned recognition as one of the most exciting and innovative artists working today. This major show focuses on Tillmans’s work in the 14 years since his major exhibition at Tate Britain and includes an installation featuring live events.

Alberto Giacometti Tate Modern London 10 May – 10 September 2017
This exhibition will focus on the influences that shaped Giacometti and the experimental way in which he developed his practice. The exhibition includes some never before seen plasters and drawings alongside more familiar bronze sculptures and oil paintings.