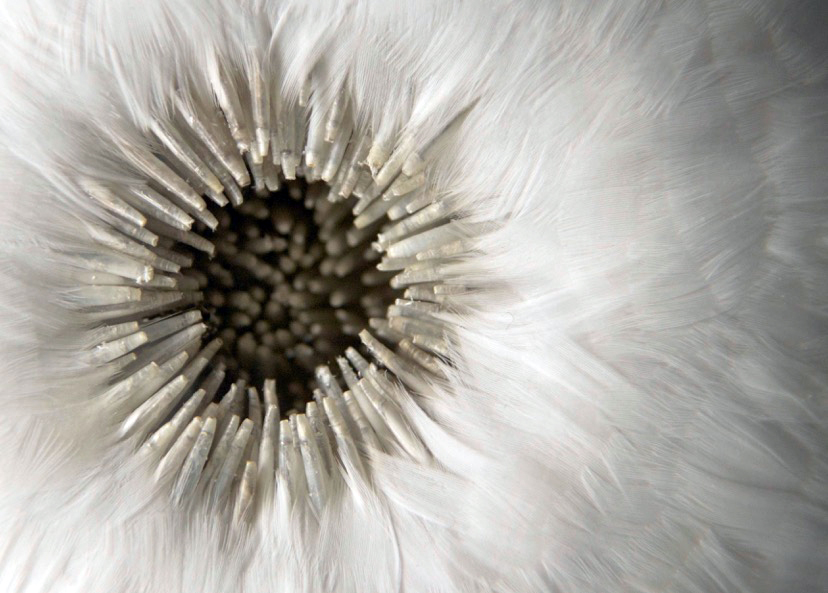 La Galerie Particulière is pleased to present Scissure, an exhibition of intimate new work from British sculptor Kate MccGwire (3 September – 15 October 2016). Following MccGwire’s debut exhibition with La Galerie Particulière in 2012, Scissure presents a delicate collection of new works in white, a notable development from the iridescence of her acclaimed rooster and mallard feather pieces and the result of a formative time period in which MccGwire has made the move on her studio barge on the Thames to journey across the canals of Europe.

Kate MccGwire is an internationally renowned artist whose darkly unsettling, languorous and uncanny sculptural objects and installations are formed from immaculately hand-trimmed feathers and bones. Exploring the duality inherent in the materials she works with, MccGwire’s sculptures are at once alien and organic. Using the traditional techniques of the plumassier, fragile feathers are intuitively wound into undulating, curved forms. Repressed within glass cases and domes, or sinking into wall-mounts, revealing exposed and ragged cavities, the works contain a sense of brooding half-life, at once attractive and threatening. Her dramatic work, sinister and sensuous, addresses themes of darkness and light, beauty and decay. Visceral and enticing, MccGwire’s practice finds its home between craft and concept; using a level of intricacy that belies the natural forms she creates.

Taking inspiration from the cycle of life and death that marks the reality of living on water, Scissure references the juxtaposition of innocence and the invasive as MccGwire turns her attention to exploring the darker associations of pure white materials. The works are on a smaller scale than previous installations such as Evacuate or Gyre, exhibited at the Arnhem Fashion Museum; making use of innovative techniques, intricate handwork and obsessive attention to detail.

The works are painstakingly layered with pure white translucent goose down, creating an undulating form. Each glowing white ‘body’ is marked by an opening or incision which exposes a hidden, dark interior. The works appear exposed, suggesting a vulnerability associated with the purity of the white surface of the sculpture in conflict with a darker undercurrent. MccGwire’s work explores duality and parallel ideas of beauty and disgust, anguish and ecstasy.

Highlights include Pelt; a series of wall-mounted sculptures in white kid leather and crow quills. Reminiscent of flayed skin, harnessed and hung to reveal a pained and complicated interior, the leather the edges have been left rough, the unaltered original skin. The contract between the sensual folds and the animated spiked interior creates a visceral composition. Meanwhile Sentient is a soft, veiled form in goose-down, restrained inside an antique glass cabinet it embraces itself in a tight coil. The work is both sensual and unsettling, stifling itself as it writhes inside a glass mausoleum, seething in brilliant white its purity becomes its most unsettling feature.

MccGwire has experimented with a new form of ‘life drawing’ for Scissure, displaying a series of graphite drawings created by maggots crawling across a paper surface. Echoing the duality of MccGwire’s sculpture, the instinctive movement of the creatures from light toward darkness results in knotted tendrils of graphite, a visceral imprint of the movement of these sightless organisms. Not only exploring notions of disgust and decay from a new perspective, MccGwire has been fascinated to discover the repetitive shapes created in nature, universal structures that erupt from the organic movement or growth of plants, fungi and animals which she has reflected in these latest works on paper, Vermiculus (2016).

For the last twelve years MccGwire has worked in her Dutch Barge moored on the Thames, but for this exhibition she has sailed the 108-year vessel from London to Paris, crossing the Channel and navigating 2000km of the canals and waterways of Belgium and France. From its haven in London, through the Netherlands and Belgium, 80 days of this journey will finally bring her to Paris to launch Scissure. The journey toward the exhibition has been both physically laborious and creatively inspiring, adding a performative element to the creation of new works, inspired by the ebb and flow of the tides, the changing landscape and experiences along the way.