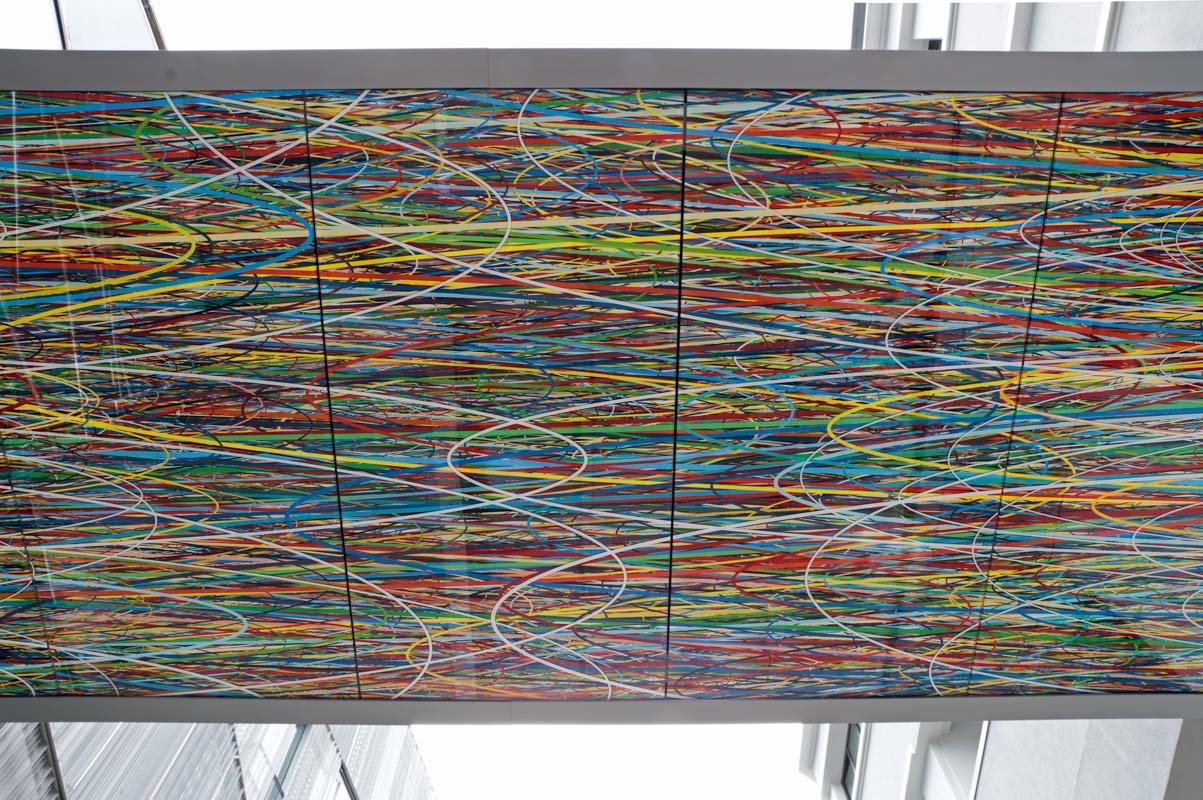 You recently unveiled your piece ‘Perspectives Inversées’, with architect Gil Percal in the Palais-Royal de Paris, can you tell us a bit more about the project?

We created this outdoor installation piece made entirely of glass to explore the ideas of perspective, viewpoint and representation. The artwork is composed of three printed glass panels that overlap each other creating two viewing angles. The printed pattern is based on classic grid lines. Grids are some of my favourite patterns as they have such a wide range of uses, mostly related to representation, space and time. Since the Renaissance when artist and art theorist Leon Battista Alberti highlighted the scope of the grid in art we have been using geometric lines as an imaging technique to draw perspectives and represent volumes on a flat surface; it is iconic of modernism in visual art, akin to Mondrian Ad Reinhardt, Sol Lewit. The grid has been used for centuries beyond art, utilised to order and control spaces, for example, grid lines are still used in the ubiquitous GPS cartographic grid.

To create this piece I projected grid patterns along several vanishing points, then printed the lines on in black and white in order to produce superimpositions and associations, conveying the idea of perspective inversion and viewpoint reversal. The transparency and lighting effects serve to generate different space perceptions.

The Paris’ Palais-Royal is a fascinating place, a genuine time-space experience. It is also a place full of geometry and during this wintery time of year, it is mostly black and white. Our piece is installed in the garden of the Palais. I like the fact that ‘Perspectives Inversées’ creates dynamic forms, mirrored images and reflecting shapes of the Palais-Royal in which the visitor’s viewpoints and surrounding space representation come into play.

You originally trained to be an engineer, how did you end up becoming an artist? How do you balance these two very different worlds in your work?

I did get a degree in engineering but I never practiced as an engineer. In fact, I was already doing art and exhibiting during my studies. Instead of being an engineer that turned into an artist, I’m just an artist that happened to study engineering because I was good at it.

In your opinion how has computer art changed over the last few years? Do you think that technology and computers are becoming a more integral component in the creative process?

I regard computers and technology as tools. For me is not how they have changed in the last few years, but rather how they are changing our relationship with fundamental issues like space, time, life and death. I’m from a generation that is not “digitally native” and so began my career as a painter, later choosing to replace paint and brushes with computers. When the Internet became mainstream in the 1990’s, we all saw it as a powerful opportunity to change the world. However, as revealed by Edgar Snowden, the Internet also turned out to be the infrastructure of a mass surveillance system that watches and observes large numbers of the population. This has dramatically changed the way we are now seeing the digital culture: from a utopian vision capable of changing the world to a system of control. I’ve always had a critical approach towards the use of technology in my art, so I exploit computers in a non-conventional way, rejecting the industry’s proposed uses and design by producing excessive computation that would usually result in bugs and glitches. By doing so, I have built a critical distance with these digital tools and a distance that I believe is required to address the rapid development of technology, as we move towards an increasingly digital future that is raising all kinds of concerns and issues.

Who are your biggest influencers?

Of all my many influencers I would most like to mention one: William Burroughs. For me, Burroughs is one of the most influential artists of the 20th century. His experimental writings and his use of the random factor as a creative process have inspired me for years; especially the famous Cut-Up technique developed by Burroughs and fellow artist Brion Gysin in Paris in the 1960’s. By deconstructing texts in a random non-linear way, Cut-Up created a new language, which in my opinion is very similar to today’s digital and technological universes. Burroughs was fascinated by control strategies and human language. He believed that language was a parasite, a virus from outer space. According to him, written words came before spoken words “I advance the theory that in the electronic revolution a virus is a very small unit of word and image.”, which led Burroughs to write many texts on the control systems of written languages and their relationships with images.

What was a highlight of 2016 for you? What was your favourite exhibition?

One of the most impressive exhibitions I saw in 2016 was Jean Luc Moulene at the Pompidou Center in Paris. Moulene is a well know photographer and was offered a retrospective. Controversially instead of showing his existing photography, he decided to produce a new set of works, consisting mostly of 3D printed objects inspired by science and technology and based on a series of rules. The outcome is really quite spectacular, each object is strong in itself, exploring superficialities, different materials, really questioning the outside, inside relationship. The scenography creates a connection between the work, resulting in an almost global cartography, the works connected by Moulene’s own rule based concept ‘protocol’. This show is the kind of inspiring exhibition that questions the status and future of sculpture, and what is more amazing is that this show was done by a photographer.

What does 2017 hold for you? Are you working on any projects currently?

I’m currently working on several new projects that deal with our relationship with pictorial digital proliferation. The Internet generates a profusion of images in which there is nothing to see. The whole paradigm of our relationship with images has changed and I want to question this. My new works focus on the disappearance of images through their circulation and proliferation. The work will be a series of images paired with their mirrored-image; meta-images that convey the idea that behind each image there is something, even a meaning, that is about to disappear. They echo the developpement of Artificial Intelligence and biotechnology where the ultimate goal is the death of death with the potential for the disappearance of the human race as a purely organic species. These new works will be exhibited in Germany, Corsica and Brazil.