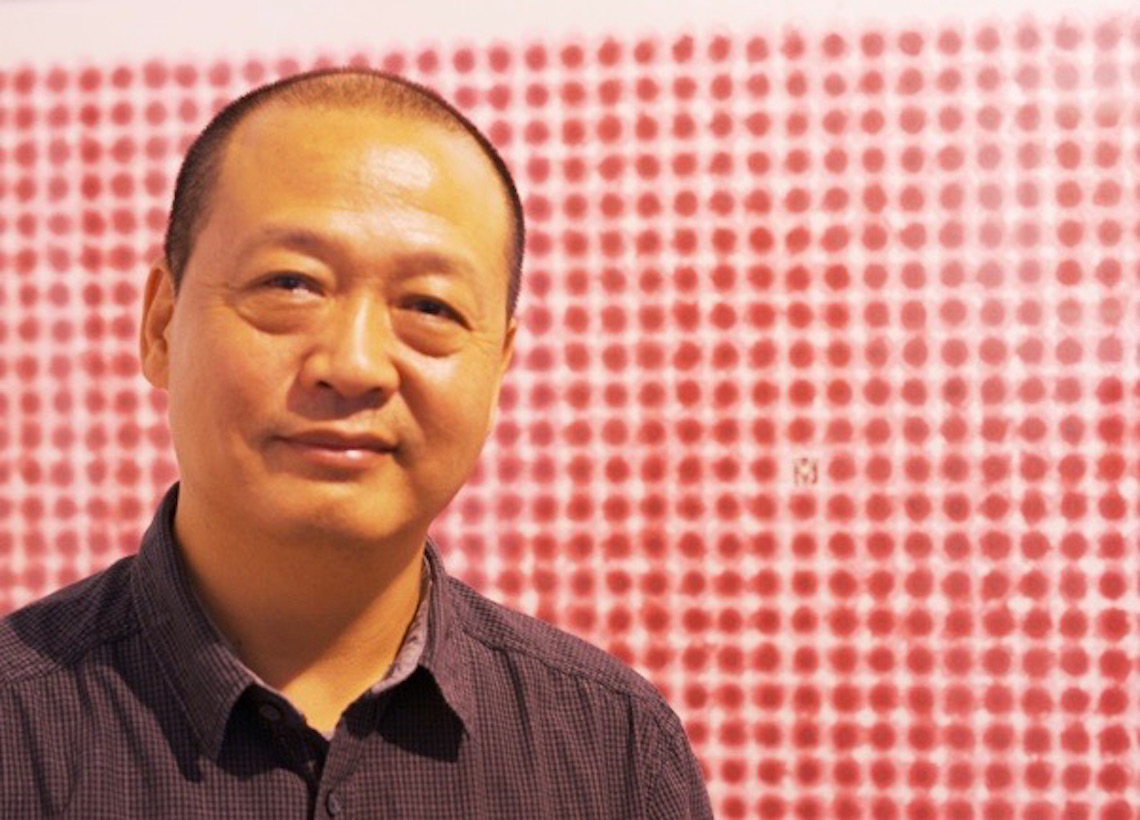 For Chinese artist Nan Qi, building his art perspective took him along a pathway dotted with Chinese and Western ideas and ideology.

When you ponder upon it, everything evolves from a single atom, building into a molecule, an entity, a thought, a community, a collaboration, a society, and beyond. Several single dots come together to represent larger perspectives that form a picture that fires the imagination and tells its own stories. Printing, essentially, is about aligning the cyan, magenta, yellow and black ink dots. The finer the dots, the more detailed the picture. For the contemporary Chinese artist Nan Qi, a single dot can be a spellbinding piece unto itself. An accidental discovery, a spilt drop of ink, mesmerised the artist who watched its absorption by the rice paper and hypnotically followed its spread. He studied dots intensely until he was able to control the progression to some extent. The term yundian dot technique as applied by Nan Qi’s minimalist approach to his art is intriguing at two obvious levels.

From afar, his images of Chairman Mao — already a cult hero of the pop art world — or horses in action, offer a sense of what the image is about, as we draw upon our own mental recollection of these scenarios to fill in the details.

Up close, the individuality of each spot making up the whole image offers another level of observation, which is almost akin to taking a journey into the soul of the painting. Though what it does for your soul depends on your feelings towards the subject matter. Clearly, commercialism and power are key areas that challenge Nan Qi’s creative pursuits; a social movement perhaps that pervades modern Chinese community that has leaped into wealth and opportunity. His recurring theme of “Authority, Sex and Money” has been constructed to challenge the established views of this powerful tripartite in today’s society; from large presentations of Chairman Mao to delicate interpretations of sexuality and the lure of the lucre as seen in three-dimensional renditions of the Chinese Yuan and the Visa credit card.

“I’ve been working many years on this theme,” Nan Qi explains in Mandarin. “I want to engage the audience, but in a different way. I want the viewer/collector to interpret it as they see it in my art.” The collectors are in ready supply, with his paintings fetching anything upwards of $5,000 to six-figure sums, and finding homes in China and the West.

Dots Of Authority
Growing up during the Cultural Revolution, Nan Qi lived the life of the common man; deprived of many things while building up resolve and resistance. “The tough experiences solidified my commitment to my art.” While these experiences formed his core, they do not dominate it. “It’s in the past. Today’s China has complete freedom,” he states, flatly, about the role of authority in China. With sex, his expressions are ever more subtle.

“Traditionally, artists express sex quite explicitly. I paint a pink dot and leave it to you to interpret it,” he says, adding with a mischievous twinkle in his eye: “Is it a flower blossoming, a blood stain or something else…?”

As the viewer peers intently for clues, he or she is being drawn into the web that Nan Qi has cleverly spun for more than three decades around a traditional Chinese art form of shui mo, or ink wash painting, that he has embellished by dipping into the inkpot of the Western world.
He offers no personal views other than what’s framed up, preferring to spark new thinking towards prevailing attitudes about current issues.

“I am not a catalyst in the sense of being a political figure. The art is more important as a catalyst…for critical thinking. If the viewer appreciates this, then I have succeeded.”

At a commercial level, success is evident. In 2012, Nan Qi shipped several pieces of his art, largely to those aged between 40 and 60 who are knowledgeable about Chinese culture, and to an emerging group of collectors exposed to Western education or business attitudes. He built up a strong following in Hong Kong, where he lived for 10 years, where many Westerners bought his art, intrigued by this Chinese artist’s perspective that infused Western pop art sensibilities into an accessible Oriental setting.

The gains from his painting were heavily reinvested into his Beijing atelier, which sits on 2,000sqm of land. Here, in relative comfort, he dotes on his dots. “It takes anything from a week to a month to complete a painting,” Nan Qi explains. The colours he works with are symbolic: Red and pink are auspicious for the Chinese and sexual; shades of grey reflect life; green refers to wealth, flora, fauna, in stark contrast to the pall of smog that hangs over Beijing through most of the year. Perhaps because of that constant grey, Nan Qi finds he is able to focus on the minutiae, undistracted and able to coax out the beauty and character in every dot of life.