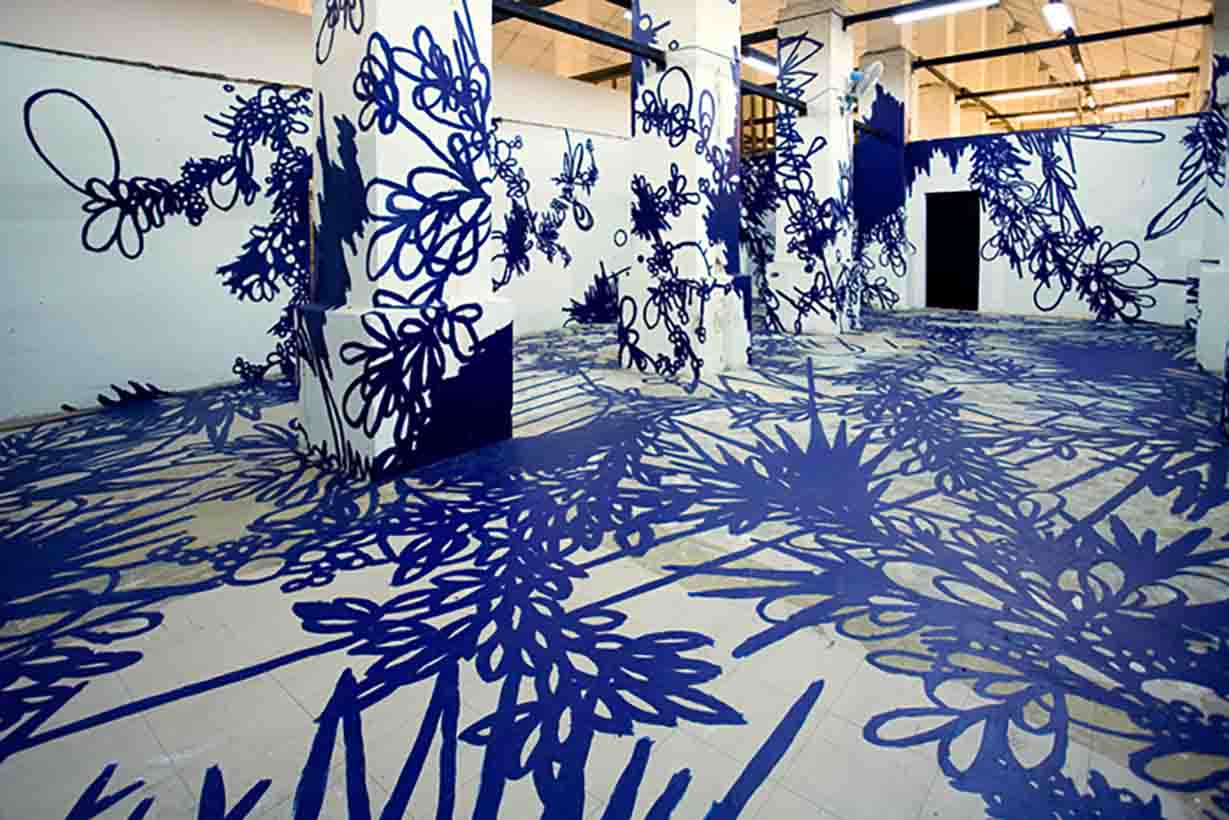 For most of the 2000’s de Bailliencourt called Singapore her home. Soon after arriving in 2002 she began to gather a strong local following that grew exponentially over the years. It was the ideal environment for the young artist, , especially in the arts scene. That’s why I wanted to come here”. By 2006 de Bailliencourt had become a powerful voice in the burgeoning Singapore art scene.

De Bailliencourt’s aesthetic has a remarkable flexibility that has allowed her to transcend multiple mediums. Constantly seeking the purest form of dialogue with nature, she freely creates her art on natural canvases like grass, traditional forms like stretched canvas and paper, and architectural forms like walls and floors. Her style has varied from frenetic and explosive in the past to serene and meditative in the present, playing with both vibrant neon palettes and subdued colours.

De Bailliencourt has always pursued projects that feel most natural to her, which often leads to unconventional collaborations such as with Japanese fashion house Comme des Garçons from 2003 to 2012 and Singaporean fashion brand Song + Kelly 21 in 2004. In that same year the artist also contributed her work to a powerful advertising campaign for Ogilvy & Mather (Singapore), which raised awareness about the issues of mental health in Singapore. Although she wrote in English, a language that is not native to her, de Bailliencourt’s iconic artistic vitality and spontaneity was exposed in a series of unharnessed, dark sketches that allude to the lack of control felt by mental health patients.

Following the successful reach of this campaign, de Bailliencourt was approached by Singapore Biennale 2006 lead designer Theseus Chan for an important advertorial commission. De Bailliencourt was selected amongst a host of local artists to create drawings for the festival’s advertising campaign. She explains “I very much enjoyed working with Theseus Chan, who gave me complete freedom. The concept [‘Belief’] was his. I did the drawings and trusted him to use them in his designs”. Splashed across the steps of Singapore’s Supreme Court, the vibrant colours of de Bailliencourt’s art conveyed the dynamic spirit of the country’s first Biennale festival.

De Bailliencourt was given an unprecedented centre-stage position at the 2006 festival, during which her major paint installation Occupation Bleue at Tanglin Camp received overwhelming acclaim. The artist conquered the tauntingly stale white walls and pillars of the abandoned military barracks with a frenzy of blue, painted line sketches. De Bailliencourt sheds light on the wild and uncontained energy of her piece, “The organic shapes are linked to the tropical climate… the work in Tanglin shows how there is no control in the jungle.” The choice of blue paint was no coincidence either, as it refers to the doodles of her childhood where automated, day-dream drawings resulted in what can be considered to be her most sincere and spontaneous artwork.

The artist’s time in Singapore came to an end as she embarked on a series of significant artist residencies, first at the French Cultural Centre in Yogyakarta in 2007 followed by Tokyo Wonder Site in Tokyo, the Lower Manhattan Cultural Council in New York and then Art Omi in Ghent. De Bailliencourt most recently completed an important residency at the famed Marfa Contemporary in Texas, where she developed progressive works from her newest series Couleur du Temps.

Today de Bailliencourt lives and works in Berlin, where she has cultivated her success into a string of major group and solo exhibitions across the US, Europe and Asia. Her return to Singapore is a momentous occasion for local supporters, who are finally given the opportunity to explore the evolution of the artist’s work since 2007. As an important innovator within the early Singaporean art scene, it is with great warmth that de Bailliencourt is welcomed back to her former home.