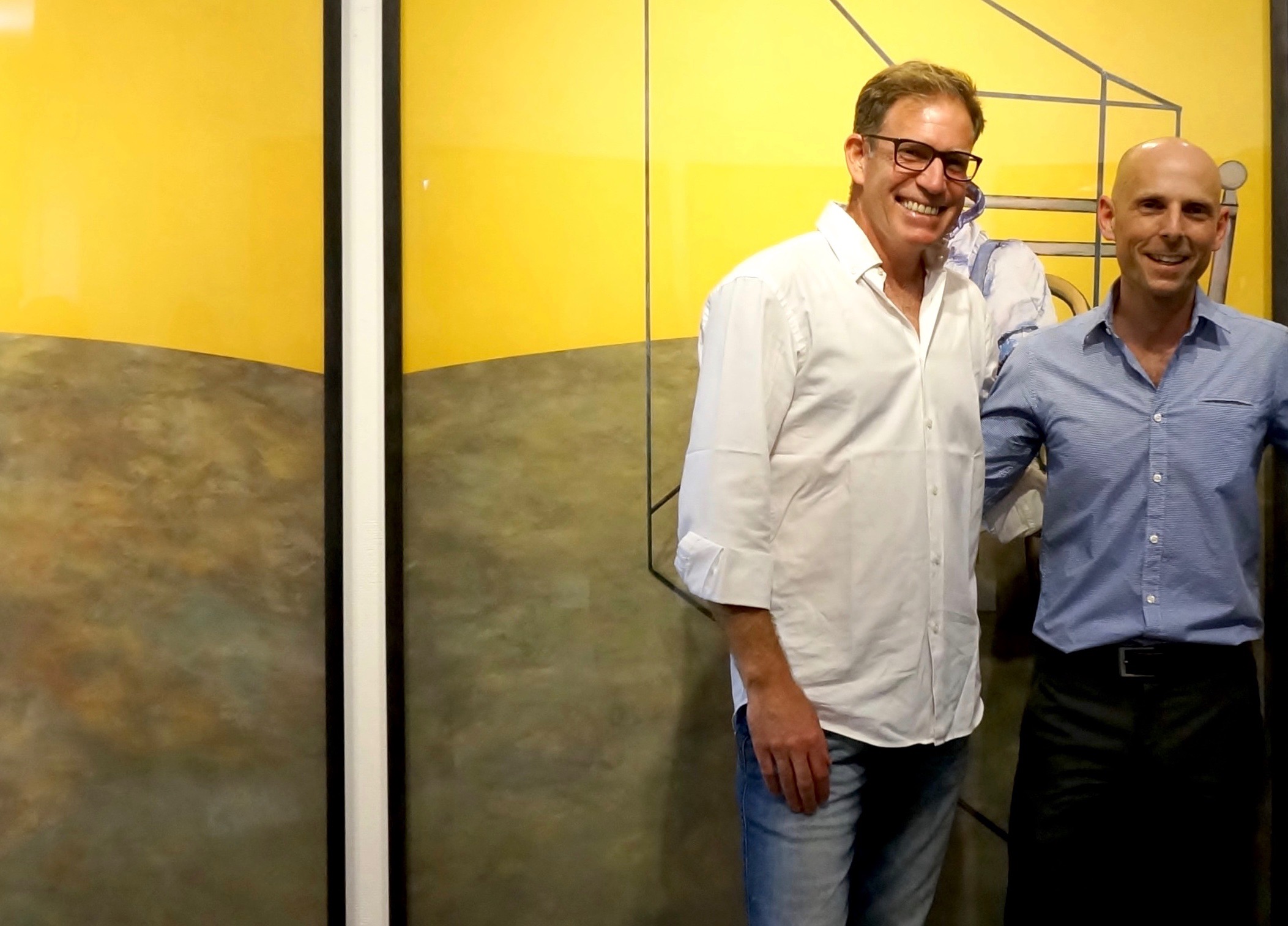 You have been very active in the world of art since a young age, having been born into a family of successful art dealers. Tell us about your early experiences in the art business, and what inspired you to remain involved over the years.
Serge Tiroche: I was born in Israel where my father had opened two of the country’s first galleries, one for antiques and one for fine arts. Art has surrounded me ever since. In the early 80′s most of my family moved to Paris. I joined them in ‘88 to do my BA in Business. I quickly found myself spending time with my father in auction houses, mostly at Drouot, and quickly got drawn into the family trading business, mostly in Impressionist and Post Impressionists at the time. Over the years, and with the growth of the Contemporary art market, the family diversified into Post War and then Contemporary. I also did my first internship at Parisian auction house Louder. Later, after graduating my business and art studies in Paris, I returned to Israel in 1992 to co-found “Tiroche” auction house – today the largest in the country. I left the auction house in ‘93 to make my first steps in capital markets and later obtained my MBA from INSEAD. On graduation I immediately joined Citigroup, first in Switzerland, then London, Israel and Turkey. I had a 10 year career as a private banker until I left the firm in 2007. During this time I started building my private collection of Contemporary Art and became increasingly passionate about it.

You spent many years working in private banking before transforming your passion for art into a full-time career. What drove you to pursue this change after 10 years in the financial services?
As a banker serving Ultra High Net Worth families and family offices, I developed an expertise in asset allocation, portfolio construction and manager selection, specifically in alternative investments – Hedge Funds, Private Equity, Real Estate, Venture Capital, Credit structures and direct investments. Interestingly, I discovered that despite all this knowledge and access to a broad range of opportunities, I still deployed most of my own capital in art investments. In tandem, the earliest research on art investments was released by professors Mei & Moses. I read it with vigor and was impressed by the returns and extremely low correlation to other asset classes. I realized that this could form the basis for transforming the passion of art collecting into a true financial investment to be included in portfolios of sophisticated investors who could tolerate illiquidity. As both a passionate collector and an investment professional myself, I decided in 2008 that I would dedicate the next phase of my life to making art an accessible asset class to a broader investor public.

One of your first projects after leaving the financial services in 2008 was ST-ART, an artist incubator initiative based in Israel. Please tell us more about the development of this project, and how it has evolved over the years.
ST-ART was indeed my first project after leaving the bank. It came purely from a place of passion and a desire to support a younger generation of artists in Israel and professionalize my own collecting practices. I understood that the creativity in Israel had far surpassed the capacity of the local art eco-system. There were not enough collectors to support it and the gallery base was too small to promote it, particularly on the international scene. Taking the basic idea from VC incubators, I thought it would make sense to develop a similar platform for newly graduating artists. ST-ART quickly established itself as a force in terms of its acquisition budget, exhibition space and reputation for providing artists with much needed mentoring on the ins and outs of the art world. Initially the scope was very broad, covering all major art schools in Israel and running a packed exhibition program. By 2011 several other incubators and not-for-profit art organisations had popped up in Israel. In tandem, I had started Art Vantage and the Tiroche DeLeon Collection, which required extensive international travel and occupied the majority of my time. So in mid-2012, I decided to scale down the activity of ST-ART and refocus it on selecting a very small number of artists, funding their ambitious projects and helping catapult them both locally and internationally.

ST-ART artist Michel Platnic’s work has been described as one of the most effective and enigmatic realisations of ‘living paintings’ today. How did you discover Platnic’s work?
I discovered Michel in the summer of 2010 at his BA graduating exhibition. I quickly acquired some of his early work and invited him to join ST-ART, including him in a couple of group shows. I was impressed by Michel’s seriousness, creativity and technical skills. In 2011 he was invited by the Ramat Gan Museum to create new work for a small solo show. He had just returned from London and had made the works of Charles II and Victoria. I thought the works were extremely powerful but felt their presentation as a projected video didn’t do them justice and were undeserving of their raison d’etre – “living paintings”. I convinced Michel to reconfigure the works and to present them in a framed screen format with rich golden rococo frames. I then arranged to consign the works to a Tel-Aviv gallery for a group exhibition. The impact on audiences was immediate and in a very short time the entire edition of 6 had sold out. Then one day Michel came to talk to me about his ambitious Bacon project. I found it fascinating and decided to fund it. A year later half the works had been completed and I decided to expose them in a solo booth at the Israeli Art Fair “Fresh Paint”. The booth was an incredible success, with most video works selling out. Michel’s work started to find its way into major collections in Israel, Europe and the US. Michel then completed the second phase of the project with 4 more works.

What aspects of Michel Platnic’s work allow him to stand apart from other emerging artists?
I believe Michel stands out in his ability to create work that is communicative to a very broad range of audiences from children, to early stage collectors, savvy collectors and art savants. He blends mediums using a rare skill-set which allows him to take advantage of the most up to date technologies, seamlessly enhancing his skills in painting, sculpting, performance, stage design, photography and production into a single, poetical, work – one that serves to perpetuate Bacon’s research by giving his figures life, space, reality.

In 2012 you co-founded the art investment fund Tiroche DeLeon Collection together with Russ DeLeon. How did your collaboration begin?
Soon after I left Citi I was introduced to Russ’s newly created family office through a former client and was invited to serve as an external adviser to the beneficial owners. 3 years later Russ asked me to help him build an art investment element into his portfolio. We quickly established the Tiroche DeLeon Collection in January 2011 as a co-investment idea where Russ put up the majority of capital and I the majority of expertise and work.

What is the mission statement of the Tiroche DeLeon Collection, and what milestones have you achieved over the last years?
Our mission is to demystify art as an investment and introduce a model that marries the interests of the art market system with that of financial investors. By introducing our transparent model and promoting open dialogue about the investment benefits, we hope to introduce new collectors to the rewards of collecting and to support artists from the developing world and their representatives. The collection started with a capital base of $10 million in 2011. In 2012 we decided to continue expanding the collection and transformed it into an art fund and invited other investors to co-invest with us. By now we are approaching 10 investors with some $21 million of capital. Our collection contains almost 400 works by established as well as somewhat younger contemporary artists from across the developing world. Our focus on museum-quality, large-scale works and our global presence make us a preferred lender to institutions around the world. We are the only fund I know that takes a curated approach, very much like a private collection. Our returns on the overall portfolio since inception stood at a solid 32.27% net to investors as of Sep 2014 – almost 10% net per annum. The returns on the few works that we have realized so far have been substantially better. Our volatility is low and our correlation to all major asset classes is pretty close to zero. We are proving that art makes sense as an investment from a theoretical asset allocation modeling perspective, from a pure investment return perspective, as a life enrichment and educational tool, and as a means of supporting international dialogue and exchange.

What aspects of art investment might young investors overlook?
Disregarding for a moment the knowledge gap, and assuming that young investors/collectors have taken a lot of time to research their acquisitions and understand the art market mechanics, one of the biggest challenges for young investors is the ability to achieve sufficient diversification, to gain access to the best works and to gather the courage to buy blue chip works, which always make for the best investment. These can be very difficult to achieve for a young collector who has limited time, space, and capital to work with, and has little chance of successfully competing with collectors for access.

What are your future projects?
We continue to raise capital for the fund and can accept investors throughout our investment period which ends in March 2017. By that time, we hope to reach a portfolio of at least $50 million which would facilitate our collaboration with private banks, family offices and pension funds to reach a broader investor community and raise a larger second fund. In the second phase of fund 1, we will focus on creating more exhibition opportunities for the collection and by 2020 will establish the best strategy for returning capital to investors, and then proceed to execute it by the end of the fund’s term in 2022.