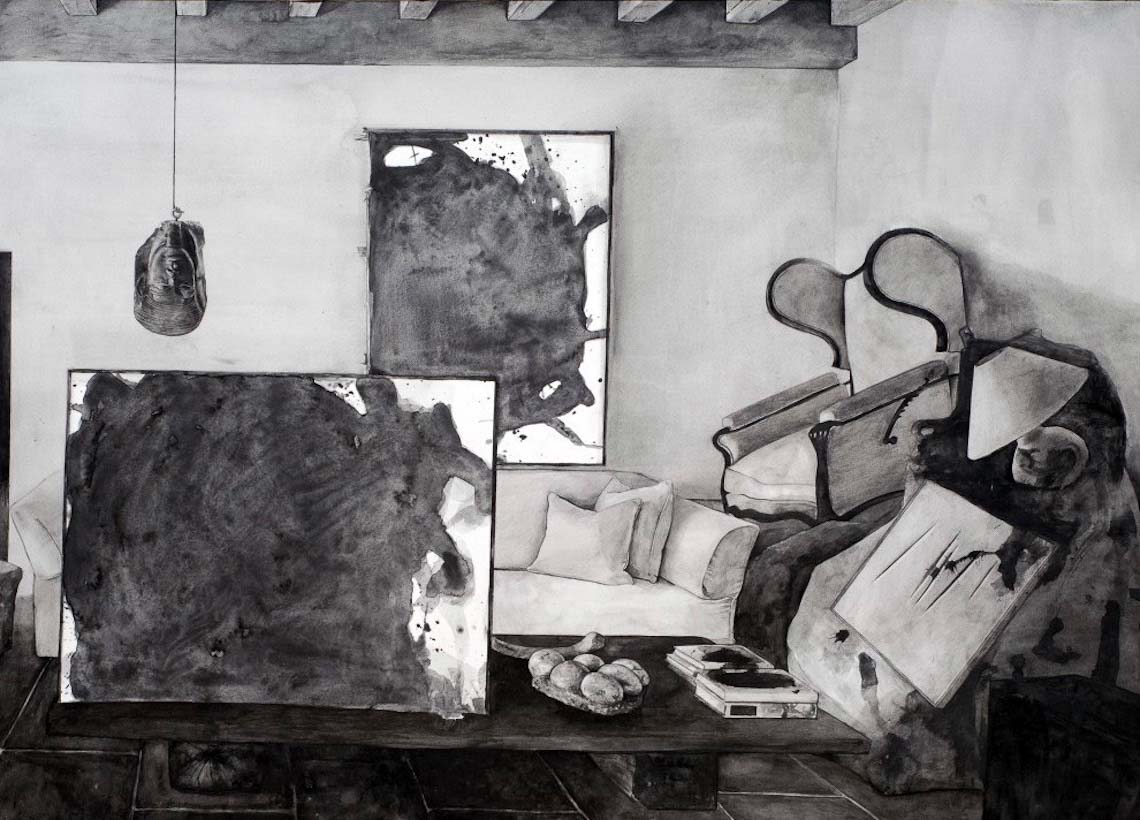 Many of the scenes captured in Hypothetical Arrangements are inspired by photographs taken from interior design books.  Why did you decide to use these images as your starting point?
Dane Patterson: For this show I wanted to begin with spaces that had a very clear design aesthetic to deviate from. Interior design worked nicely for this, as well as other no nonsense interiors such as those in Haus Wittgenstein or Shaker furnishings where things are intentionally sparse and direct. The design sensibility is clear, so it becomes striking when things are mis-arranged. I was really excited to draw the different furniture, patterns, and objects in these books. To me they seem unattainable. Maybe it’s that they feel stifling? I just don’t feel a connection with the aesthetic. They do offer me a great opportunity to bring others’ artwork into the conversation. Having drawn the artworks within these pieces, I feel really close to them from these really nice collections. These ranged from ancient statuary to Cy Twombly drawings, and it was a great excuse to play around with other methods of drawing that are so different than mine. It was really fun to imagine ways to mess up such highly aestheticized spaces.

Please explain how your creative process has evolved from earlier series prior to Hypothetical Arrangements. Has technology become an increasingly important tool?
My creative process has changed a lot. My work up until now has been based totally on photographs that I’ve taken expressly to use as source material. I’ve done other room arrangements, but they were always physically re-arranged by me and then photographed and drawn. While the primary source material remains a photograph of a room, here the alterations are made up from imagination as I go. In a way some of these have been the most low tech images I’ve ever made. I just drew from observation while going through source material for most of the Aerin Lauder images, for example. Later, especially with the larger drawings, I crafted a photo collage in photoshop first and then projected. It really varied from image to image. I think this is the first group of drawings where I’ve let my hand become more visible in the drawings. There are a lot of washes with graphite in this work. This is quite a new technique for me. I mix gum arabic with powdered graphite  and water to make a watercolor-like graphite wash. It’s liberating to work with because I’m able to speed up certain aspects of the drawing. Large flat areas for example are a bit less tedious, though they all are still considerably detailed.

The scenes have an unusual quality of feeling both present yet timeless, as though they could be placed anywhere between the 19th to 21st centuries. What choices did you make to achieve this effect and why?
Some of the spaces, such as the Morris Jumel Mansion in upper Manhattan, are from the 19th century and have historically appropriate furnishings while the locations designed by Axel Vervoordt often include a mix of contemporary and historical objects. So while some of these drawings have a definite “period” look, I like the way that time becomes more ambiguous in many of the locations. I wanted to have a range of types of locations in this group of drawings, and when I bring in other elements from imagination or secondary source photos that clash between time periods as well as design styles becomes really loud.

The term Hypothetical implies an element of achievability. What role does logic play in your compositions?
I’d like the images to be plausible, and as I planned a drawing I tried to imagine myself in the space in order to consider how the physics of the arrangements would play out. What circumstances would have to be in place for a piece of furniture to be suspended in the room? How would it hang? So achievability was a big part of the thought process, but still, I also arranged things in some of these spaces in ways that are not plausible at all. A chair floating, for example. That I did not physically arrange these spaces gave me the freedom to sometimes skirt logic.

Many of your scenes depict objects in scenarios that are unusual and unexpected. Does the ordinary function of an object have any relevance to its role in your arrangements?
Functionality is really interesting to me. There needed to be some balance between things being placed in a functional versus nonfunctional way. I wanted to have enough objects properly placed so that the original context was still legible, but have enough contrary information or placement to set up a clear imbalance. In “Hypothetical Arrangement for the Interior Design of Axel Vervoordt #5” I kept the chair in the room as a focal point. It remains untouched and in its original placement. The rest of the room has been cluttered and painted about. I think I needed that chair untouched as an anchor to ground the otherwise nonsensical arrangement. So functionality, or perhaps partial functionality, plays that grounding role for me a lot I think.

Many viewers would describe your work as humorous. Is your work intentionally tongue-in-cheek, or is humour a natural companion to what can be seen as randomness?
Humor is a motivating factor for me. Tongue in cheek certainly, but as you said humor is a companion to the randomness of the re-arrangement. I remember a childhood friend’s parents’ home and their all white, seemingly untouched living room. It was like a museum and totally off limits. I still want to overturn those couches.

You once explained, “I think of these drawings as akin to thought experiments, such as those designed by philosophers when they puzzle through the consequences of particular questions”.  What questions are you posing in these works? Do you think you have arrived at any answers through the process of creation?
While thumbing through reference materials I form relationships between elements that interest me. For example, the leg of a designer chair gets shoved into an impressivley decorated cake. When this is done, we have a conversation about value, or respect of objects. But it’s also a funny gesture because it’s just ridiculous. With thought experiments the philosopher puzzles through moral conundrums. In a way these images are aesthetic conundrums where I’m playing with extremes or interjections of nonsense.