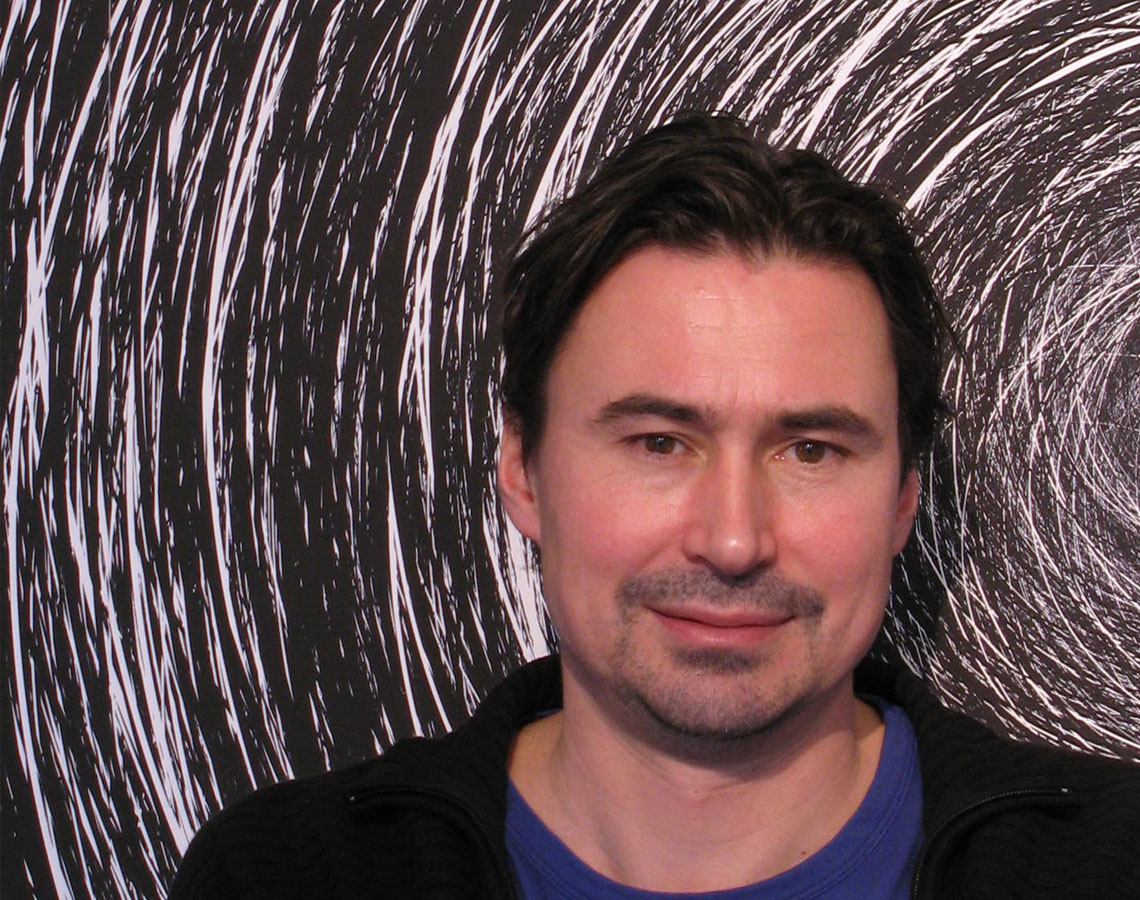 Pascal Dombis is a French visual artist whose works explore the complexities of visual paradoxes using intricate technological process. Over his more than 20-year career, Dombis has been using computers and algorithms to generate excessive repetitions of simple processes that computationally reproduce geometric or typographical signs, creating unpredictable and dynamic visual forms.
These de-structuring structures and irrational environments disturb, engage and inspire the viewer, posing fascinating paradoxes between the mechanical control and chaotic randomness that produce them.

How did you come to work in new media and computer art?
It was an accidental encounter in the beginning of the 90’s! I was a painter at that time doing a kind of post combine painting, under the influence of Rauschenberg and Stella. And I was using etching prints in these paintings.  The way I employed prints was experimental, by using the same plate several times with different variations or inking levels, and printing on different media. I knew the computer and I had done a class in computer art during my study at Boston Museum School in the late 80’s, but I was not attracted to it at all.
At one point, I had no longer access to a printing press to play with. However, at the same time, I could have access to laser printers that had become available in 1989/1990. And I thought that a computer file could be equivalent to a printing plate. So I started to experiment with programming and digital printing (like on non-office paper media or exploring jamming patterns). The geometric figure I was using at that time was a spiral and I looked for ways to program it. One day, I found a book that said that the best algorithm to program a spiral was one of a simplified fractal.
So I looked for a fractal algorithm, simplified it and programmed my own spiral and was happy with it for the time being. Then one day, I recalled that it was a simplified fractal that I had used and wondered what would be the result if it was not simplified. And that was when I got a real shock because the outcome was totally unpredictable, far removed from a simple spiral. What fascinated me is that on one hand, you have a super simple algorithm that says “repeat the draw a line operation one thousand times” and on the other hand you have an output pattern that is beyond the draw line operation. Furthermore, it was unpredictable.  By changing very few parameters, you could output a wide range of visual patterns from geometric to organic, mineral, cells or city planning maps.
It was a real shock because I realized there was something totally new in this process that went beyond the modern painting history where I felt stuck in (the end of painting). And it was also an exciting promethean feeling, like discovering a way to represent all of the outside world! So I gave up brushes, paint and canvas. But it took me several more years to find out the right way to transform such excitement into meaningful artworks and 25 years later, my work process is still based on a similar feeling!

Could you tell us a bit about the process of making your works?
Most of the time, I start with binary items: affirmative / negative statements, lines / curves, white / black. What I am then interested in is to reach a point where affirmation and negation outdo each other, where uniqueness is no longer unique: a line which is not exactly straight, etc. When rules become excessive, new and unpredictable universes, uncontrolled by me, come to the fore and generate the unlikely, which is not totally dissimilar with the way surrealistic exquisite corpses operated.
Chance plays a big role in my art making process and most of my work consists in developing enough initial conditions so that more chance will happen. That is why I initially work with simplistic rules: drawing a straight line for instance. Then I use digital tools to reach the wildest proliferation imaginable. I realized that the simpler the items used in proliferating programming, the more unexpected and complex the effects are at the end of the line.

What messages or metaphors do you employ, and what do you seek to convey?
I do not pretend to convey messages, I’m more raising questions. My position is that of a modernist; what I mean is that I attempt to develop new forms. Novelty is not an aim in itself but it certainly is a necessary one. The artist’s role is to make and produce things that deal with what is unthought, not yet thought or what is unthinkable. It is the only way not to get bored to death. I would say that I certainly do not intend to repeat the scales of art history, but at the same time I know that I belong to a hundred years of visual art history.

You’ve mentioned that it is your job to confront the human viewer with their own primitive irrationality. What do you mean by this?
We human beings have kept a part of primitivism in us because we share the same DNA as our cave ancestors and most of our behaviours are still driven by our reptilian brain. And irrationality relates to the unknown and unexplainable and it has always played a big role in mankind’s history, mostly responsible for the invention of art and religion. The way I deal with it in my work is to cause irrationality to emerge from the supposed rationality of the digital technology.
For me, the irrational comes from the excessive repetition of simple processes. The resulting space is unpredictable, noisy, unstable and dynamic. Visual forms appear – they are not intentionally programmed – out of the excessive enforcement of autonomous and simple rules. I do not consciously conceive a structure in advance. I lay down simple rules and let them go through serial interaction.
For example, the title of some pieces is “Irrational Geometry”. This title insists on false binary systems. Geometrics are supposed to be rational but geometric excess does lead to irrationality. This is where new technologies are so interesting because they reflect our present everyday life which is made up, as everybody knows, of rational as well as irrational elements. My proliferating lines are not so different from Australian Aborigines’ Songlines and are maybe reminiscent of Lucretius’s atomist philosophy according to which atoms are all falling down vertically although the slightest diverging modification of the fall is responsible for the collision of atoms, hence life. Superrational technological excess leads to the primitive and irrational unconscious which is not a technological thing at all.

In the realm of new media and computer art, how has the relationship between the artist and his tools changed over time?
In the past 20 years, digital tools have become totally ubiquitous; they are part of our daily life. So the way we look at those tools, our relationship with them, and the messages they convey have changed completely.
And as an artist experimenting with digital tools, I am very sensitive to be in control of those tools and not to be dependent or fascinated by them. Otherwise, there is a risk that the work merely demonstrates or illustrates a technology or a technique.
This is why my own way of working with computers is simplistic; I try to make the most of it as a computational tool for its capacity to ceaselessly repeat the same task: an Arte Povera-like use of new technologies. For example, I have been using flicker in many of my video or lenticular work.
Flicker is a simple loop (black frame followed by a white frame) that have several interest points. It is super simple (like the 0 and 1 in the computer instruction) but super-efficient – it allows the creation of different spaces and different viewer consciousness. When applied to such flicker operations, the use of digital tools, with their powerful computation capacity, generates new experiences beyond those from classic analog devices.

I use digital tools in a non-conventional way, departing from the way they have been designed by the industry. Doing so, I have built a critical distance with those tools. And this also allows my work to deliver a visual experience to the viewers that they do not have in their normal digital life with the iPod / iPad.
For example, I use lenticular material in my work. The way I use it has nothing to do with what it has been originally designed for. Such material is manufactured for 3D images for which you have to play with the background / foreground planes and generate several images that will create a stereo effect for the 2 human eyes. Typically in 3D images, you will use around ten views and ten quite similar ones. My own usage of the lenticular is totally different, I am employing many more images than the material is designed for , like 50 or 100 views and those images are totally different ( like flickered ones). This creates the ground for unexpected error results, emerging visual patterns and new experience.

What is the role of multiplicity in your work?
Well, the multiple viewpoint deals more with perspectivism. This is an idea developed by Nietzsche where he basically says that there is no more truth, no more binary facts, but only perspectives and viewpoints. And viewpoint relates to the viewer and I feel that it is mandatory or necessary for the artist to take the viewer into the artwork delivery scope. The famous Duchamp quote “It is the viewer that makes the work of art” is truer now in the XXIst century than it was last century. And I try to always challenge the viewer by interfering with his or her perceptions: dejà vu experiences of non structuring structures, vertigo, serenity, vortex, infinitude, after images…