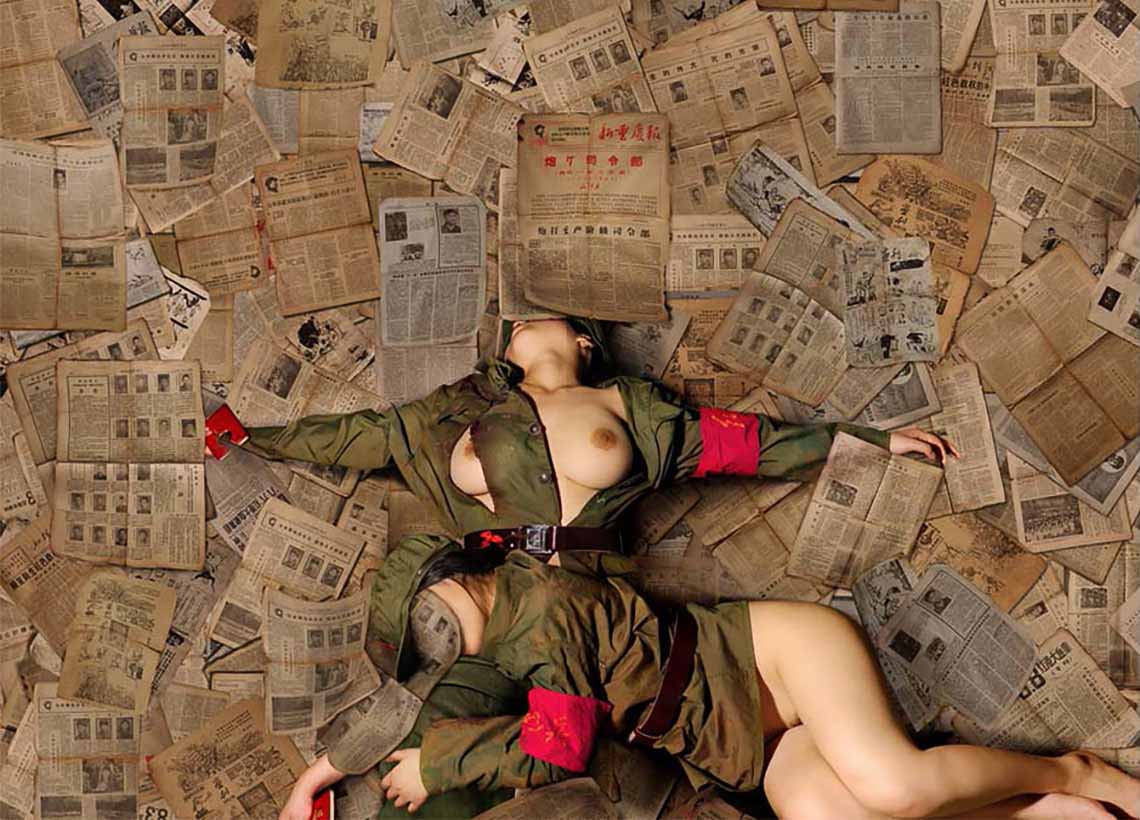 Tian Taiquan is a Chinese artist whose subversive photography imbued with poetry transgresses the political codes established in China while expressing a violent criticism on the Cultural Revolution. Paradoxically evocative, Tian Taiquan’s photographs address both desires and sufferings leaving the viewer with an ambiguous bitter sweet feeling.

Could you please tell us a little bit about yourself and family background? What brought you to become an artist?
I was born in a very poor family, with my father being a boatman and my mother a porter. She had to do heavy labour work to support a family with five kids. They were both so stressed that they easily got angry over very small issues and my memory of childhood was all about the tension.
Some may find my artworks eerie and full of death and violence. This is totally related to my personal experiences. I lived by the Yangtze River and often there were dead bodies floating along the river. I had to face the concept of death at a very young age and I soon accepted it as part of daily life.
I have loved drawing and photography since I was a child. I was admitted into the Sichuan Fine Arts Institute in 1984 and I started creating my own artworks in a simple and crude dark room. Creation is a means for me to heal and to release the gloominess of my memories.

Your works involve a lot of post processing and editing. Which do you think is more important in your creative process, the photographing or the post processing?
Both the post processing and photographing are very important to me. The process of photographing is a form of brainstorming for me while I collect, prepare and perfect my materials. This is a very critical stage for my creating process because it is impossible to cook a meal without rice. I never plan ahead and I don’t have the habit of drafting, therefore post editing is still an enjoyable experience for me. I find inspiration during creating and I always look forward to unexpected surprises.
I can’t bear the thought of someone else creating or thinking on my behalf and that is why I never hire an assistant. Whether it is photographing or post processing, I always complete all artworks by myself.

You’re well known for featuring sensuous female bodies in your artworks. What’s the story behind such composition?
They may appear as sensuous naked bodies to ordinary audience but I use them as a representation of my concepts.
People had to hide and restrict their desires during the Cultural Revolution. Females were completely masculinized with a phony propaganda appearance. Spiritual desires and physical desires are like two sides of a coin. Physical desires were deeply constrained into darkness during the Cultural Revolution to heighten the spiritual desires in a twisted way. I am using the female bodies to reveal the hidden sides of physical and material desires, mocking the imprisonment of humanity.

During that historical period, people paid no respect to dignity, human rights, or even life. Some were even arbitrarily killed for random reasons. Therefore, I also try to express the liveliness and holiness of human lives by positioning female bodies in my artworks.

You were still a child during the Cultural Revolution. Why did it influence you so much and make you decide to use it as a permanent subject in your artworks?
Artworks from any artist are definitely a combination of personal memories with cultural backgrounds. I spent my entire teenage years during the Cultural Revolution, from six to sixteen, and the influence it has on me will probably last for the rest of my life.
I still have an old picture of me and my elder siblings, all proudly wearing the Red Guards badges. It was a crazy peri0d of history and everyone, young or old, was a product of the movement.

When I was in primary school, I often wrote gratefully in my compositions, “In the New China today, we are well provided and living a happy life while the Taiwanese are still suffering…” However, in reality, we couldn’t even buy anything without a government issued ticket. All necessities were limited and we had to queue for the whole night just to buy rice or meat.
At the same time, people were crazily worshipping our leaders. Every day before dawn, our father would wake us up and force us to kneel in front of a portrait of Chairman Mao to recite his quotations. Everyone wore a Mao badge and carried a book of Mao quotations at all times to show their faithfulness.
The hatred against so called ‘class enemies’ was ridiculously inflated and permeated. I remember my mother who claimed to have ‘the blood of landowners’ was often criticized in public and even my friends would curse her. As a child, this hurt me badly and I was constantly wondering how it is possible that my dear mother is a public enemy.
Eventually the worship and hatred reached a threshold extent and people lost their minds, resulting in an armed combat. The violence and chaos during the Cultural Revolution were deeply engraved into my mind and became my permanent subject in art creation.

Do you think people need to understand the background of the Cultural Revolution to appreciate your artworks?
I want my artworks to be like a knife that gives audience a sharp pain. Although they are related to the Cultural Revolution in China, the essence of my works is about life and death. In this sense, people don’t necessarily need to understand the background to appreciate the power of my artworks.

We noticed you’re heavily engaged in today’s social networks to share your artworks and interact with the audience. What’s your take on the online platforms?
I believe dissemination is the true power and it is the only way an artist can contribute to the society. Once, I published some of my Cultural Revolution artworks on Sina Weibo and I was totally thrilled by the statistics of 12,031 reposts and more than 6,000,000 views. This is a number impossible to reach for traditional galleries and museums.
Online platforms today offer everyone an opportunity to express freely. Any artist, who is not looking for favour from galleries, institutes, critics or curators, is totally able to communicate and spread artworks through the Internet.

If you could place your studio anywhere in the world, where would you go?
I would like to go to the US since it is considered as the most influential country in politics, economics and culture. I would like to be there myself and experience it.

If you could meet any artist, alive or dead, who would you choose to meet?
Damien Hirst and Jeff Koons, they are the most recognized artists and they stand firm at the edge of today’s contemporary art world. It would be a great honour if I could meet them.

If you were to be born as a plant or animal, what would you want to become?
I wish I could become a condor in my next life to be absolutely free and unfettered.

What’s your favorite city/music/food/book etc? Does that give you inspirations for your creation?
I was born in Chongqing and I have been living there all my life. I love the complexity and uncertainty of this terminal city and the foggy climate gives it a mysterious appearance.
I am often touched by religious music. The sadness and solemnity gives me endless inspiration.
Having Chongqing noodles on the street side is something I really enjoy doing. It is the most down-to-earth life experience.
The Meditations is one of my favorite books and its discussion on life and death has triggered many of my thoughts.