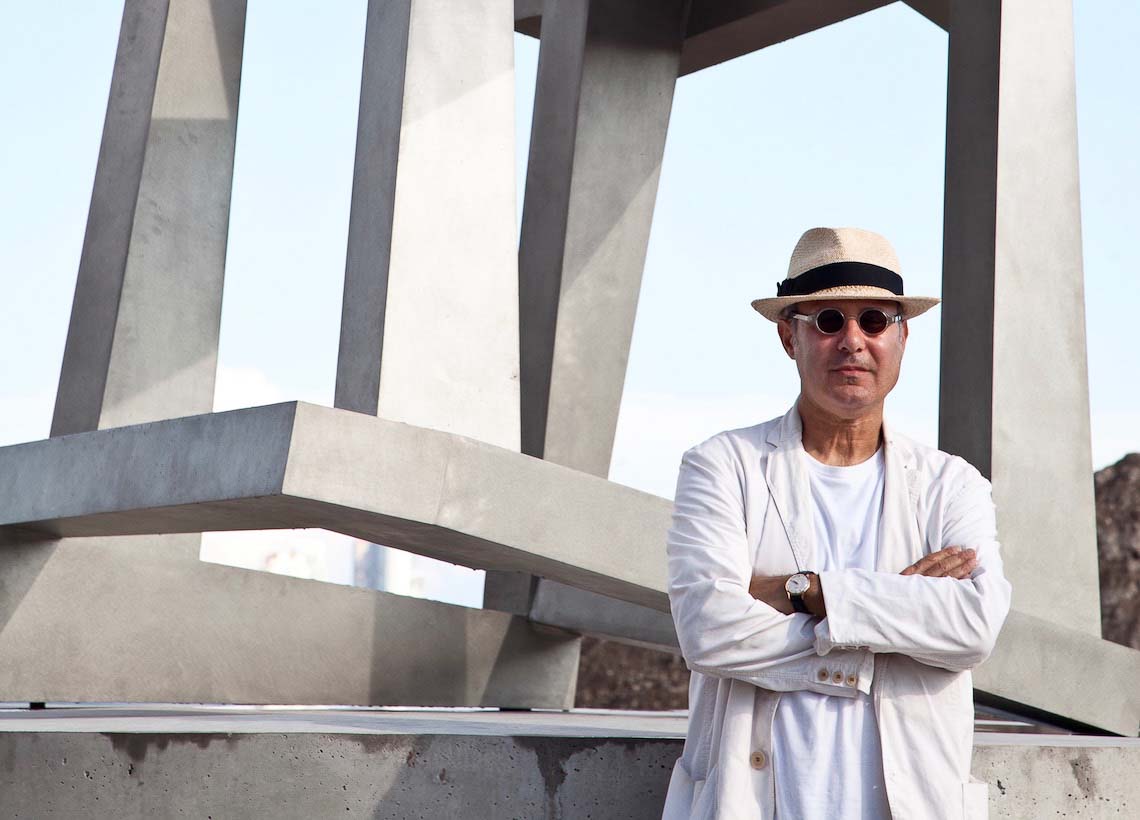 You work with industrial materials such as Corten steel and aluminium. Is this a purely aesthetic choice? Have you always been working with these materials?
Jedd Novatt: When I started out as a sculptor, my options were limited and based predominately on accessibility. I started working with mild steel in college partly because there was an available stock in the studio, and I was attracted to its raw and industrial quality. When I moved to New York City in 1981, I continued to work in steel. It was affordable, easily available at scrap yards and on construction sites around the City, and I found the whole process of working with scrap steel challenging: searching for and hauling it, and then cutting, welding, grinding and painting it.  Never having interest in creating found-object sculptures, I preferred using this un-malleable, resistant metal, and was challenged to go beyond the limitations of the raw material.  I often think that it was helpful for the development of my work to have significant restrictions with the material and not have too many choices.
In the past, I have made works in plaster, stone, wood, resin and clay. I now use primarily stainless steel and bronze. I start each work in plaster or wood and often create full scale works first with these materials. I like that bronze offers the choice of a changing patina when placed outdoors. I regard my mild steel sculptures to be exclusively indoor works, and I don’t want the surface to change.
The surface with this chaos series has been secondary to the space that the form creates. This is partly the space within the limbs of the work, but, in fact, the form I focus on most is the inverse of the material of the work: the space that surrounds it, which I imagine as solid. The creation of this negative space is part of the work – perhaps that space can be said to have no surface at all. It is, at least, the beginning of the engagement of the work with its setting. Ultimately, I work with material in a manner that allows me to focus on the “drawing” and form of a sculpture, which to me are the essential.

Can you explain the recurrence of the word Chaos in the titles of your series? When looking at them it seems the sculptures are competing with chaos, that they are walls, or structures against void.
The title represents an idea that encapsulates various aspects of the definition of the word chaos. Ironically, order is a large part of the idea; or rather the realisation that order might be random. I think about this word for different reasons, but in the end the title Chaos best describes a response to many things, and full of contradictions.
Your question is good: “Are the sculptures competing with chaos, are they walls, or structures against void?” My works titled Chaos are mostly about the internal description of space, the dynamic activity inside the void. As I’ve often said, trying to describe or put into words visual arts is, more often than not, futile. Even when I put a specific label, title or description on my work, it feels either limited or just not sufficient. I think about many ideas but they change fairly often, and I find myself simply compelled to make the next work.  In essence, I follow my instincts and desires to represent or evoke a series of ideas in each work. They resonate with me in various ways as I make them and then lead towards some kind of completed state, though the ideas that are both contained within and generated by a sculpture develop each time you experience it.

Some critics talk about “the phenomenology of a viewing space” when studying your work – incurring intentionality is at the centre of your creations. However, you mentioned that it belongs to the viewer to come up with answers. What is, in your work, the importance of intention and interpretation?
“The phenomenology of a viewing space” is an important aspect of my work. One might say – making concrete a space. As my works have been sometimes described as architectonic, one invariably relates my work to this concept. Although intention is always there, fortunately, accidents do occur when working, which leads to different explorations of a particular thought that can be meaningful in the development of a series. I contemplate more the rigour of working on a series; that is to say, not giving up too soon. I make each work to delve into something that will systemically reveal an idea. As I’ve often said, the type of work that interests me and the work that I make is out there for the viewers to take in on their own. And if they invest the time to observe they might see it. Helping the viewer access a work with text is something that many people suggest is important to do…I don’t. I accept that I can’t control how viewers will interpret my work. And fortunately, that interpretation won’t be static.

A sculpture is never identical when looking at it with different angles. Asymmetry, inequality and disequilibrium seem to rule. What is the role of perspective in your work?
There are infinite possibilities in this series, which of course is one of the more challenging aspects. I’m trying to pursue this series to the end and recognise that non-representational works are more difficult to access. A sculpture is never the same each time we look at it because our moods, emotional state, and intellectual development evolve, which alter our perspective.
I certainly think about asymmetry, inequality and critically, equilibrium moving toward disequilibrium. From a physical point of view, which I take your question to mean, anytime we make a three-dimensional object we deal with perspective, whether we are interested or not. It’s not something that I think too much about, just part of the physical reality of an object. And certainly, I expect my works to be experienced from all perspectives or points of view.

Your works are playing with an unbalanced balance and seem to communicate fragility through the material’s strength. The viewer always wonders how does the work stand up and defy gravity. How do you deal with the mathematical part of your work?
Although I don’t work with any math or specific calculation, I recognise the inevitable correlation between any object and the math or geometry of its form. As far as the “unbalanced balance” you observe, I imagine my works as matrixes or non-objective constellations where balance is secondary to my interest in taking the “air out” of the form. In other words, the forms don’t feel hollow.
I do reflect, however, on the moment before collapse — the ultimate fragility and unpredictability of action and reaction. As we know, steel, stone and other materials, despite their inherent strength, under extraordinary circumstances become “fragile” too. My Chaos series probably relates much more to imbalance, fragility and the moment before collapse.

Your sculptures are part of international landscapes – Miami, London, Bilbao amongst others. How do you think of the relationship between your sculpture and the space? Do you like the fact that elements can play a role when the sculpture is placed outdoors?
Once a work is installed, it integrates into and challenges other spaces and planes. Scale is of particular interest, which of course is effected by the placement in any environment. Put a small work on a large table and suddenly you have a piazza—the work appears monumental in the space. Conversely, install a very large work outdoors, and without a ceiling, the scale of the work changes and looks different then when in the foundry despite having 50 foot ceilings. When installed outside, the sculptures engage architecture and landscape, and the most difficult part of it, the sky. Light plays a significant role as often when I’ve seen my works lit up at night, they reveal things that had not been apparent in daylight. The shadows made by the works are interactive — this is true of indoor works as well. Finding the right placement for large works in locations with established architecture and mature gardens becomes a process of completing a sort of puzzle. When I travel and see my works in different cities or collections I’m reminded of the uniqueness of each installation due also to the personality of each environment. What has been interesting is experiencing of how various cultures with different exposure to the fine arts relate to my work and to sculpture in general — it’s often surprising. Nevertheless, I see my works as independent of their environment, able to stand on their own — which is the point.