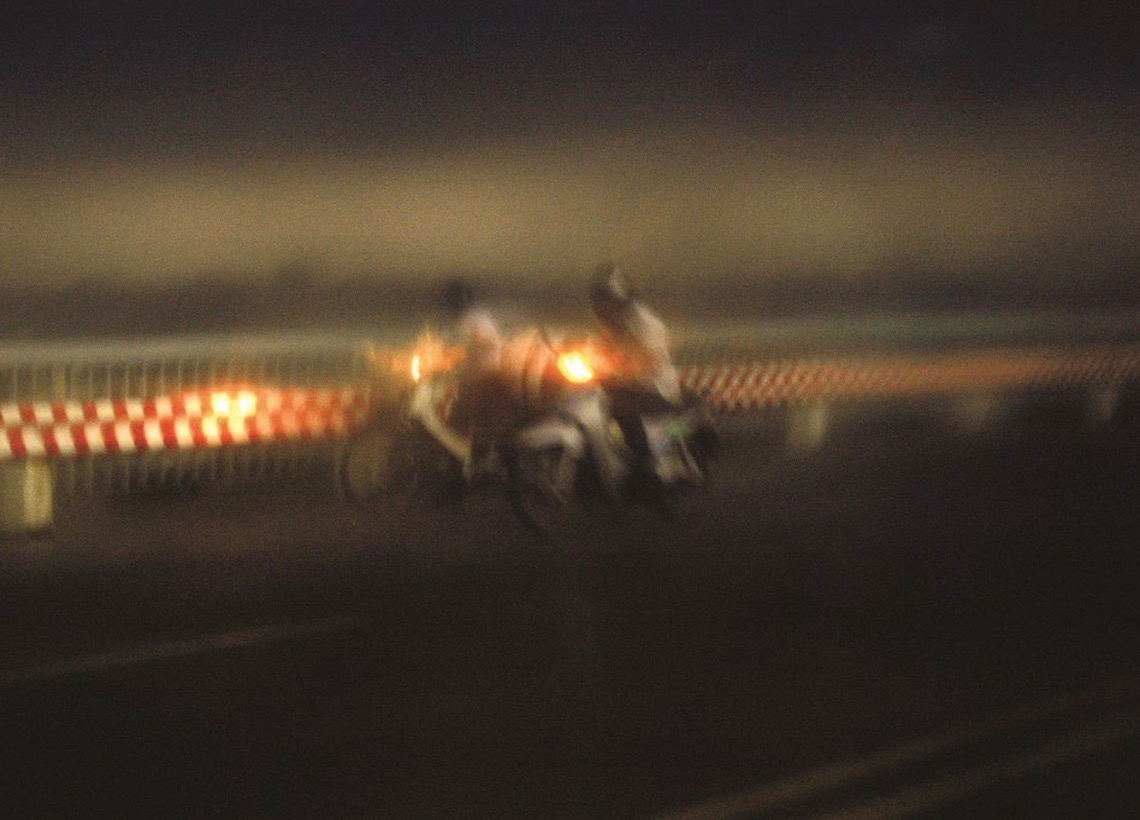 How did you come to make the Monsoon series?
Sherman Ong: I was in Hanoi for my artist residency under the Goethe Institut Art Connexions project. I had already started on a visual haiku series, Hanoi Haiku, when this series came to me by chance during a hailstorm one afternoon in Hanoi. On that day, the sky was very dark. I was in a van when suddenly I heard very loud banging on the roof of the van. Then I saw the hailstones falling like rocks on the bonnet of the van. It was my first time experiencing a hailstorm. I was in awe of its sheer power and intensity. Large pieces of ice came crashing on to the van and other vehicles on the road. The ice pieces are quite big and people were just running helter-skelter for protection. They would rush for the nearest shelter or instinctively couch down to make their bodies as small as possible so that there is less surface area for the hail to hit. The hailstorm lasted for about 5 minutes and was followed by blistering rain. When the rain came, some people decided to carry on with their journey through the blanket of water. The rain was so heavy that I was looking at the scene through a sheet of water. I wanted to capture the mood of the monsoon and how it affects human mobility and the surrounding urban environment. For me, the intervention of the monsoon on the landscape and the body underscore the relationship between Nature and Man within a constructed urban setting.

Can you tell us a bit more about the Spurious Landscapes series?
The title draws inspiration from this statement by John Berger: “Landscapes can be deceptive. Sometimes a landscape seems to be less a setting for the life of its inhabitants than a curtain behind which their struggles, achievements and accidents take place.”
The two mediums that I work in, film and photography, share one thing in common – the Narrative. I have always been interested in telling stories about the human condition – living, dying, loving, hoping, forgetting and longing – and how we organize and regulate our lives and our environment. I am interested in exploring the intersection between Nature and Human Nature, between the landscape and the body, offering an alternative view point to the banal while eliciting the subtle beauty of everyday life.
The series straddles between randomness and planned, where the viewer is invariably drawn to question the ‘validity’ of the photograph as a document or a construction, whether the scene was ‘found’ or ‘intervened’. I would like to let the answer remain ambiguous and to open up possibilities for the real and the surreal to mingle in the works. 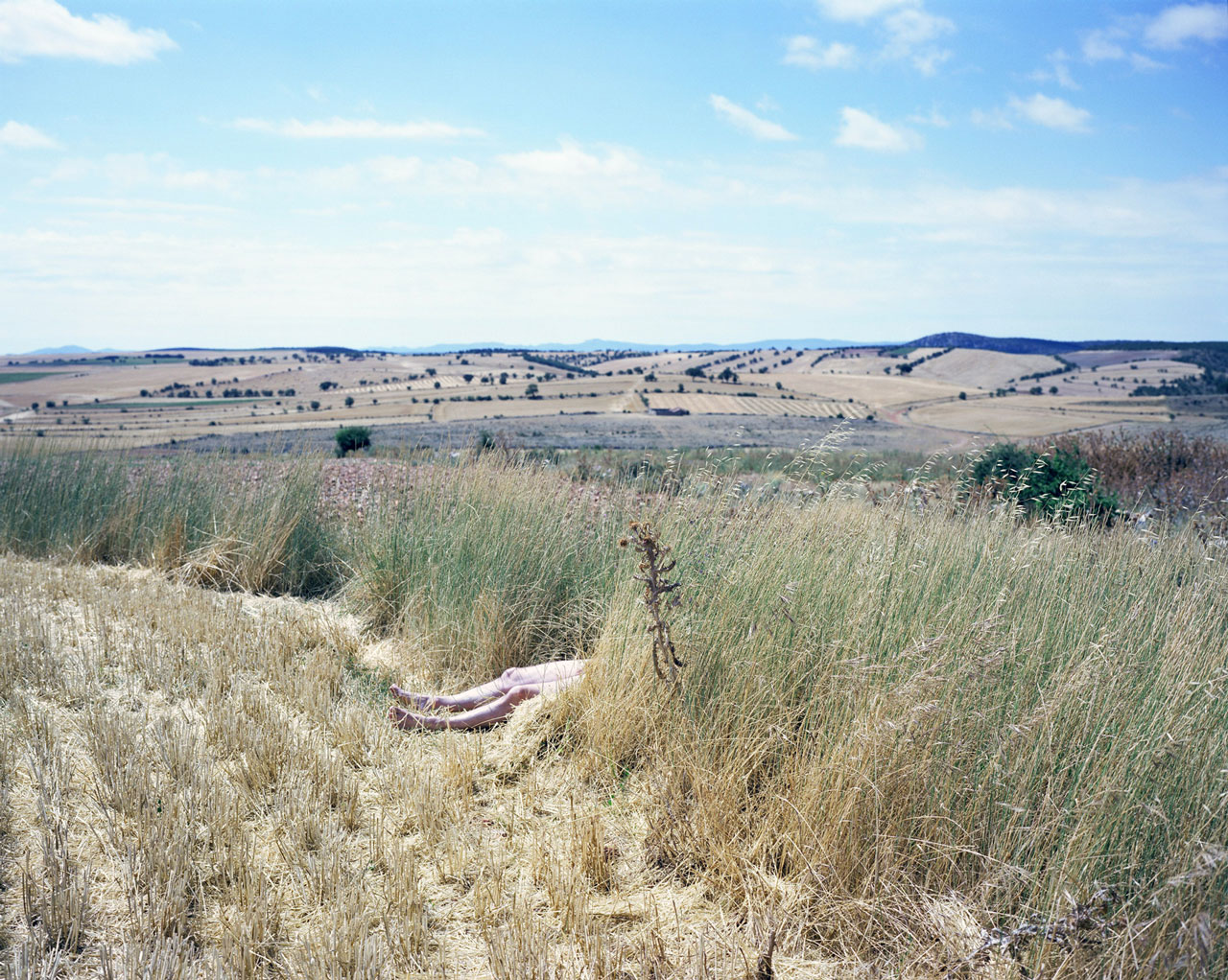 Where are the photographs taken and why did you choose this mysterious title?
The photos were taken in various countries during my travels exhibiting my works. The works on exhibition are taken in Spain, Vietnam, Singapore, Brazil.
I think the title is more enigmatic than mysterious. By definition, spurious means “not being what it purports to be; false or fake”. I am always interested in the in-betweeness of things, the uncertainty, the hybridity of situations and the intersection between real and surreal, documentary and fiction, the decisive moment and constructed photography.

What are the prevailing themes in your work?
I have always been interested in the human condition – living, dying, loving, praying, forgetting and longing – and how we organize and regulate our lives and our environment. As a photographer, I am interested in exploring the intersection between Nature and Human Nature, between the landscape and the body, offering an alternative view point to the banal while eliciting the subtle beauty of everyday life. In my encounters with different peoples and cultures, I realize that each of them have their own survival mechanisms of coping, harnessing or controlling Nature in order to build a stable social environment where they can thrive. This idea of coping, harnessing or controlling Nature, and how it intersects with Human Nature in our quest to better our lives – in particular, the social/private spaces in a built urban environment – has always been my interest and a recurring theme in my work.

How do your photography and video work dialogue with each other?
On my 10th birthday, my father gave me a Kodak Instamatic camera. That was the beginning of my passionate relationship with the world of images.

As a child, I was already going to the cinema quite often as my grandfather worked as projectionist in a now demolished cinema called The Sun in Malacca. From still images, I soon developed a keen interest in moving images. For me it was a natural progression and also a logical one, as both the still and the moving image are in essence the same. Photography allows me to move from ‘calligraphy’ to ‘sculpture’ and back again, all within the same medium.
Now I work in both still and moving images, as these are the two art forms that resonate with me and allow for an unlimited scope of expression.