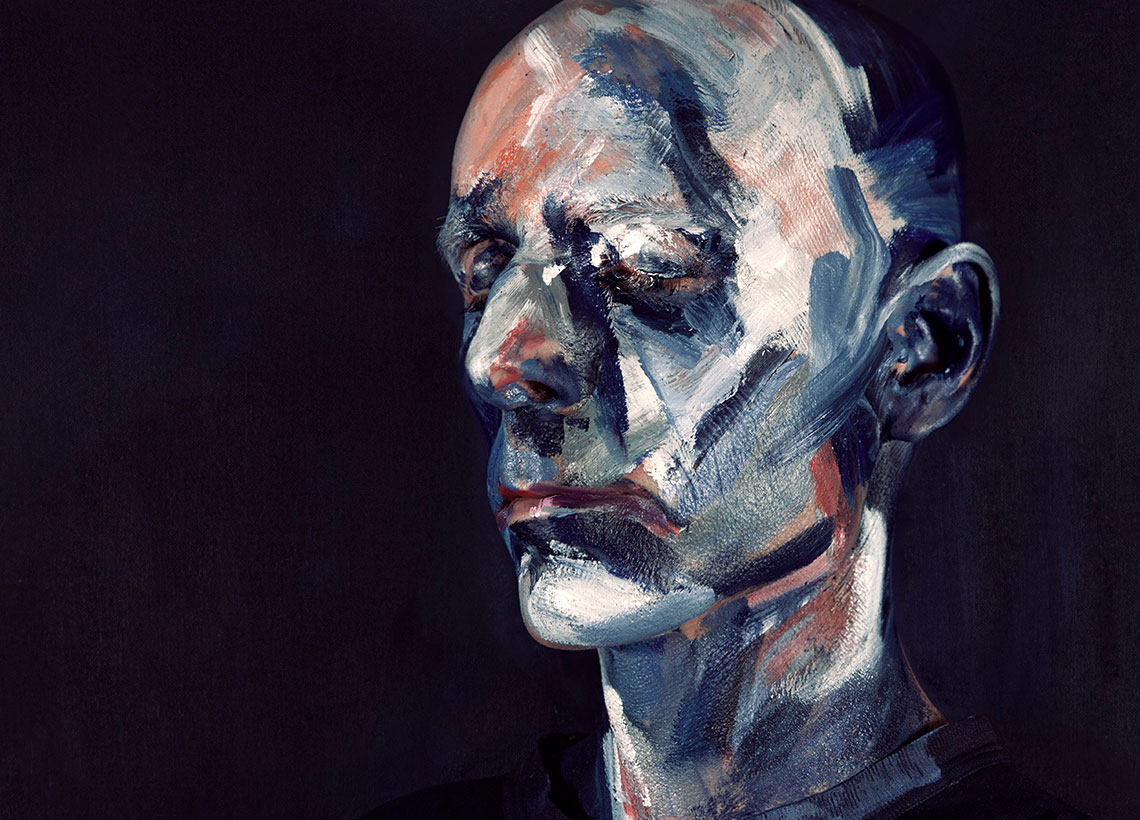 INTERVIEW WITH ARTIST MICHEL PLATNIC: BEHIND THE PORTRAIT

Born in France in 1970, Israeli artist Michel Platnic’s preoccupation with the human form is vivid in his latest works, where he challenges the boundaries of artistic mediums by merging technology with tradition. In a nod to the work of Francis Bacon, Platnic’s ‘living paintings’ expand on the idea of the portrait by bringing his subjects to life using a combination of photography, video, painting and performance. After painting a scene on a cinema-style set, Platnic then puts himself and his models into this world, painting their faces and body with bold strokes of paint in the style of Bacon’s painterly abstract portraits. The result is unexpected: projected videos of the portraits seem entirely static upon first glance, until one notices the gentle raising of the chest as the subject breathes, the dart of the eye as it follows the viewer around the room, and the careful tilt of the head.

At the age of 28 you moved to Israel, where art became your livelihood.
What drove you to find your voice and vision as an artist?
In France I was an Electrical Engineer. Even though I had a very comfortable life and a lot of recognition with my job, something fundamental was missing in my life. Israel is a young country that is still questioning its cultural background and history. The unstable political situation influences daily life directly. People don’t live a comfortable life like I knew in France. A few days after I arrived, people were going in the street wearing a gas mask. I was directly plunged into the unstable Israeli daily life with the basic question: What shall I do now? How tomorrow will look like? Slowly this became my new life, full of existential questions. I felt the urge to look for this thing that was missing in my life. I learnt theatre, physical theatre, sociology, anthropology, and then few years later, in 2002, I painted for the first time before learning classical sculpting and drawing. Very quickly I understood that through Art I could use all of my knowledge, abilities and experiences in one.

What artists or performers inspire you, and how has this inspiration contributed to your work?
My influences come from various mediums; the cinema sets of Kubrick, the characters and colors of Peter Greenaway, the psychological atmosphere of David Lynch, the intense work of Actors of Hitchcock, the painting surfaces of Euan Uglow and David Hockney, the brush stroke of Lucian Freud, the repetitions of Pina Bausch, the relation to time and random situations of Merce Cunningham, the expressive body language of Étienne Decroux, the masks of Ariane Mnouchkine, the Fictions of Borges, “When I was a work of Art” from Eric-Emmanuel Schmitt, the intimate conflicts of Vito Acconci, the physical states of Bill Viola works, the body extensions of Gilbert & George, the usage of space of Felice Varini and Georges Rousse and a lot more.

How did you achieve such a powerful understanding of the body and movement?
For the last 25 years I have dealt with Martial Arts. When I was living in France I was more into Japanese Martial Arts like Judo and Karate, but when I moved to Israel I switched to Chinese Internal Martial Arts like Sing-I-Chuang and Tai-Chi. I also practice every possible extreme sport, like parachuting, alpinism, climbing, diving, and flying gliders. I learnt of physical expressive techniques at theatre school, where I trained in Jacques Lecoq’s techniques and then practiced Étienne Decroux’s body expressions in a dance company.

As a multidisciplinary artist, your work requires expertise in a wide range of techniques. Please tell us a bit about your process, from conception to execution.
All my works are first modeled using sketches. At the beginning I usually work with Indian ink, black and white, and then I add water colors. This step usually includes mathematical calculations to understand the size of the set, and to calculate the approximate angles of the camera, what lens to use, and where the camera should be positioned. Then, I sometimes use a 3-D software to simulate the dimensions of the set more precisely, since the set is three-dimensional and there is an infinite number of parameters that may influence each other. Once all is planned, the construction can start. Each set takes usually two months of intensive work to build. It may combine various mediums such as painting on canvas, metal, wood, concrete, plastic, and a lot of additional materials. I work with assistants for this part. In parallel, we work on lighting design, create the costumes for the model, and build prosthesis. This part includes a lot of project planning, very similar to a cinema filming day, as everything needs to be ready for the filming. On the day of the filming the studio changes into a cinema set, full of lighting. There are usually 10 to 15 people are present, including the model(s), cameraman, photographer, light designer, costume designer, make-up designer, production, light and art assistants. Most of the filming days last nearly 24 hours in a row. Once the model is painted he/she has to go on. To stop a filming day before it is finished means starting everything from scratch the next time. The whole set remains inaccessible until the very last moment of the filming day, where the décor, models and camera and lighting come together simultaneously. No mistakes can be made because it is just too exhausting for model and team to do it twice.

In the series After, your works are founded upon the iconic portraits of Francis Bacon. Why do you choose Francis Bacon as your foundation?
Bacon is often considered a Post-war existentialist artist. The characters in Bacon’s paintings are isolated and explore the surrounding space. The only spectacle is a character waiting or being in physical effort. The characters in his works are distorted, where blurred bodies are shown as flesh and are fragmented. I am part of the second generation after WW2. I consider Bacon to be a father figure, and felt I needed to respond to his interpretation of human kind. The first drive I had when I saw Bacon’s works was to give a face back to his characters in the way described by [Emmanuel] Levinas: a face to communicate and grow through interactions with Others. I believe that man can be free not only in the void described by Sartre but that the Other can be an opportunity of growth, a way to go beyond ourselves.

Francis Bacon almost never worked directly from the model but rather on his visual recall and feelings, often supported by photographs. The paint movement he used was immediate and unpredictable, but he always aimed at bringing back his works to reality by giving them a recording of the appearance. In my works, I pursue Bacon’s creative process by giving his works a physical existence in a three dimensional world. I reenact what Bacon created from his memory and imagination and then give it an answer. It allows me to change this vision of man, whom he presents as part of a reality that I inherited from the past generation.
In my videos characters build their own space. The place they occupy is a product of their own actions, while in some other works they sense the space by moving into it and exploring it. Some of the characters leave the frame or, as in one of the triptych works, one character enters in his neighbor’s frame to help build the space. There is the internal space, but there is an outside as well. There is hope, and reality is modified. Characters have their own say and their own existence while interacting with the environment. But often, my wish to see hope for the future is stuck in the memory and fears of the past, transmitted by previous generations. Bacon’s space is still here [in my works], each brush stroke is reproduced one by one, built over and over by the video presented in infinite loops.
In this project I was interested in getting closer to the psychic mechanism of human perception and transmission of memory, the transition mechanisms that link imagination to reality. Winnicott describes the phantasm as an isolated and dissociated phenomenon that participates neither to life nor to the dream. For him, the consciousness may bring the act of phantasmatisation to imagination and then link it to reality.
The iconic works of Bacon appeared to me the most relevant reference to deal with the influence of the past and to interact with it.

You once said “the preparation of the characters during filming of my works takes a very long time, models are tired and at some point forget that the camera will be filming”. What are you looking to capture and why is it important?
I choose the models to work with because their personality and if their body fits the work. I am interested in the person. I never work with actors as I am not looking to have someone play a role. I also never work with the same model twice because I want it to be the first time. I am interested in how the person will react to the new environment that has been built for him or her. At the beginning of a filming day, the model is the focus point of 10 to 15 people working at the set, which can be impressing and very intense. But after several hours the model forgets the people. She/he is tired and when the camera rolls there is a sudden silence. At that point the model is alone under the projectors, isolated from the environment, and only then I can catch him without any mask, in a very genuine moment of his being.

After goes beyond Bacon’s familiar aesthetic and creates a new world. Why is it significant that your subjects are ‘living’?
Bacon’s painted spaces, which translated into reality, are completely deformed. It is possible to build any deformed space, but if a human has to live into it, his abilities become the main constraint.

I can only start planning and building the set when I know who is going to be the model. In this case it is not the space, but the human who is the center of the work. The fact that the subjects are living is the only way for them to respond, act, and somehow communicate through their actions and face. The living character can show more complexity. He has a soul, and it requires more blindness to see him only as flesh.

What are your future plans for your artistic exploration?
I will continue to mix and blur the borders between the different mediums and, by that, question their definition. The human body will continue to be at the center at my works. I am working on sociological aspects of our occidental societies. Gender and religion as a main focus. These subjects will add content to my works.