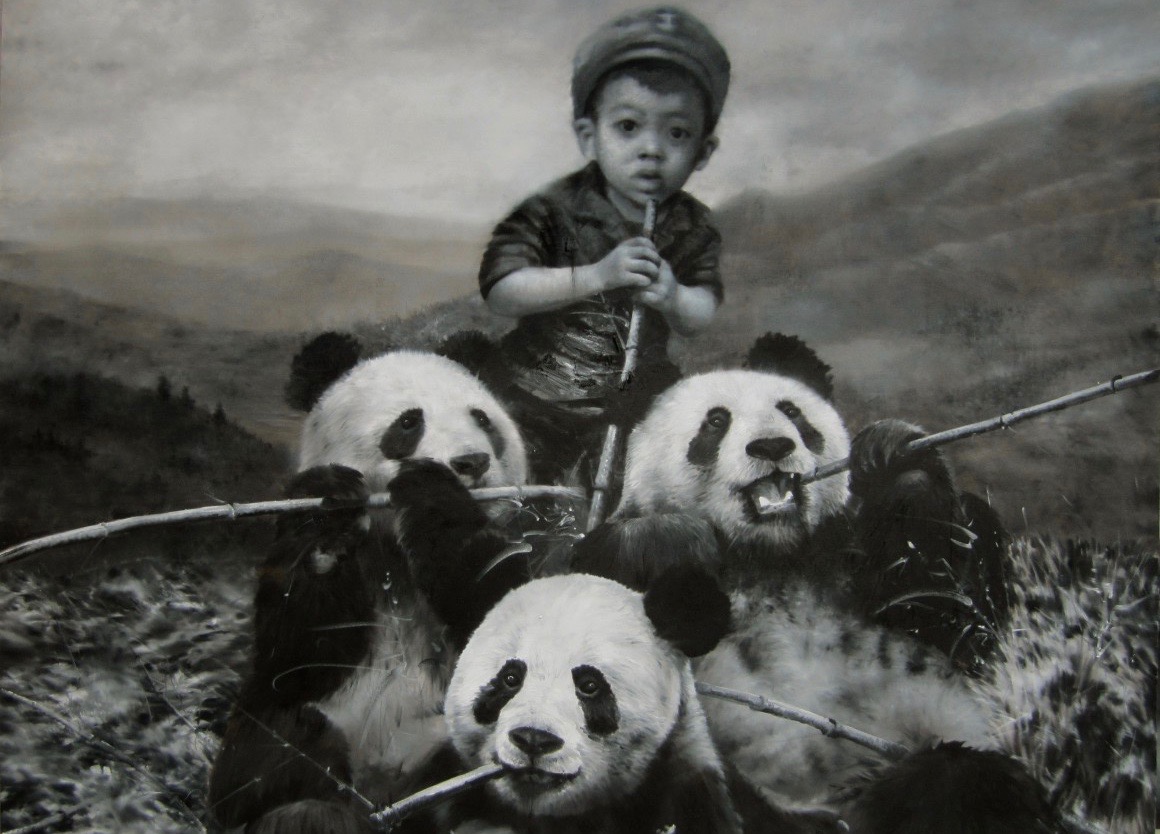 LI TIANBING AND THE SELF-PORTRAIT SERIES

Li Tianbing explores fiction and reality haunted by selected childhood memories in a suffocating society and charged political setting. Using photographs as a medium to illustrate his reflections on the past and his multicultural experiences, Li layers the present using oil painting in a timeless duality. The artist bears the scars of the Chinese single child policy introduced in 1979 and still enforced today. Loneliness haunted his childhood that he spent fantasizing playmates and fictitious brothers keeping him company on the outskirts of reality.

“My generation is unique, in China and in the world. We were the first not to fully know the meaning of the words ‘brother’ and ‘sister’. […] My mother was studying when I was born, so they waited to have their second child. By the time they were ready, it was too late. […] But that’s the past. Through these portraits, in fact, I want to talk about the distortion of the human nature of today, which is often lonely and deformed due to the society we are living in. It’s like a bigger orphanage.” – Li Tianbing

Li Tianbing’s work is inspired by five precious photo records of his childhood that his father took thanks to the unique camera of the army Department of Propaganda where he was working. This portrait is endlessly used as a reference to paint imaginary scenes in which the artist re-populates the urban landscapes of his wounded youth. As shadows, children appear on political and social backgrounds reminding the harsh reality twisted with current glimpses. Army enrollment, propaganda or the Tiananmen massacre violently contrast with the innocence and purity vividly depicted through the children’s eyes. This state of confusion engulfs the artist and he loses the frontier between his own authenticity and invention, between past and present.

As Li Tianbing moved to Paris in 1996 to study art at Ecole des Beaux Arts, he kept digging into his identity, traveling back and forth to his home country seeking to seize it better through separation. Fusing both cultures, the artist incorporates traditional Chinese motifs into Western forms of interpretation: on the one hand, the colour blue symbolising capitalism, nuances of black based on Taoist philosophy, the use of text as another layer of meaning; on the other, the practice of self-portrait, the use of oil on canvas, the importance of photography as a starting point and the integration of colour. Yet, the consequences of the single child policy, the conception of family as well as the reflection on contemporary Chinese society remain central in Li Tianbing’s work.

A recurrent fixity and absence lie in the children’s look: no expression can be read. Breaking up with the autobiographic pact based on an absolute transparency with the viewer or reader, Li Tianbing seems to build an impassable sanctuary of intimacy, feelings and memories. The context in which children are evolving is almost more suggestive than the characters as if they were existing without being, present without participating. A violent gap is pronounced between children and the scenes depicted, they are the unique but powerless witnesses of an undeserved and shifted situation. Whereas the photographic materiality conveyed through the characters’ black and white aesthetics guides the viewer towards a certain representation of reality, one questions, facing this terrible indifference and hollowness, children’s actual identity in society: the unsaid contains a dark irony.