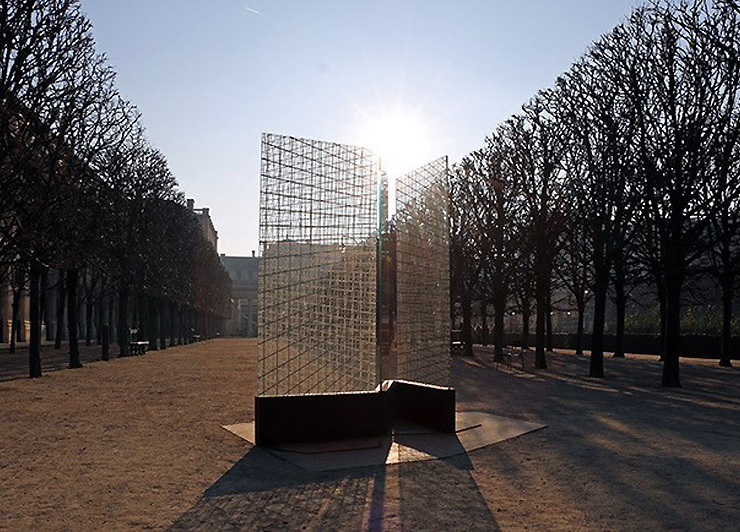 Perspectives Inversées is the newest piece to feature amongst the contemporary works also in the Palais-Royal site and will be on show until April 2nd 2017.

The work features three glass panels, each printed with geometric grids, similar to those used by designers and architects to accurately present perspectives, volume and three dimensions on a flat surface. The panels are placed in an almost zig zag alignment, thus overlapping each other. The resulting effect is a simple design to confuse and entwine, and appears almost chaotic to the naked eye.

The artists’ distortion of a simple yet structured grid design is a direct representation of the theme of the piece, which is to explore perspective, viewpoint and representation. The purposeful disruption of the otherwise clean lines asks the viewer to understand a reverse viewpoint, the array of shapes and changes to the criscross lines evoke an understanding of different viewpoints.

Pascal Dombis is a French visual artist whose unpredictable and dynamic visuals utilise the use of excessive technological process. Over his twenty year career, Dombis has been using computers and algorithms to generate elaborate repetitions of simple processes, which reproduce geometric or typographical signs. These destructuring structures and irrational environments disturb, engage and inspire the viewer, and pose fascinating paradoxes between the mechanical control and chaotic randomness that produce them.

Pascal Dombis and Gil Percal have collaborated on a number of public art projects.

Perespectives Inversées was was first displayed at Domaine National de Saint-Germain-en-Laye, on the occasion of the Année Lenôtre 1613-2013, Les Nouvelles Folies Françaises exhibition.

For further information on the artist:
Born in 1965, Pascal Dombis graduated with a Bachelor in Engineering from Insa University in Lyon, France before settling on pursuing an artistic career. His decision to focus on the Arts led him to Tufts University where he completed a series of computer art classes in 1987. In 1988, Dombis held his first exhibition overseas in the USA.

His solo exhibitions around the world include Stiftung Bartels Fondation in Switzerland, Cité de la Mode et du Design in France, Page Gallery in South Korea, Budapest Art Factory in Hungary and also RAYGUN Art Projects in Australia. A selection of his group exhibitions he has participated in are the 55th Venice Biennale of Art, Block Museum in the USA, Museum Kunstpalast in Germany, CENTRALE for contemporary art in Belgium and the Acri Museum of Modern and Contemporary Art in Italy. Notably, Dombis has been commissioned to create monumental public works for the City of Perth, Australia and the Ministry of Culture in France. The artist currently lives and works in Paris.