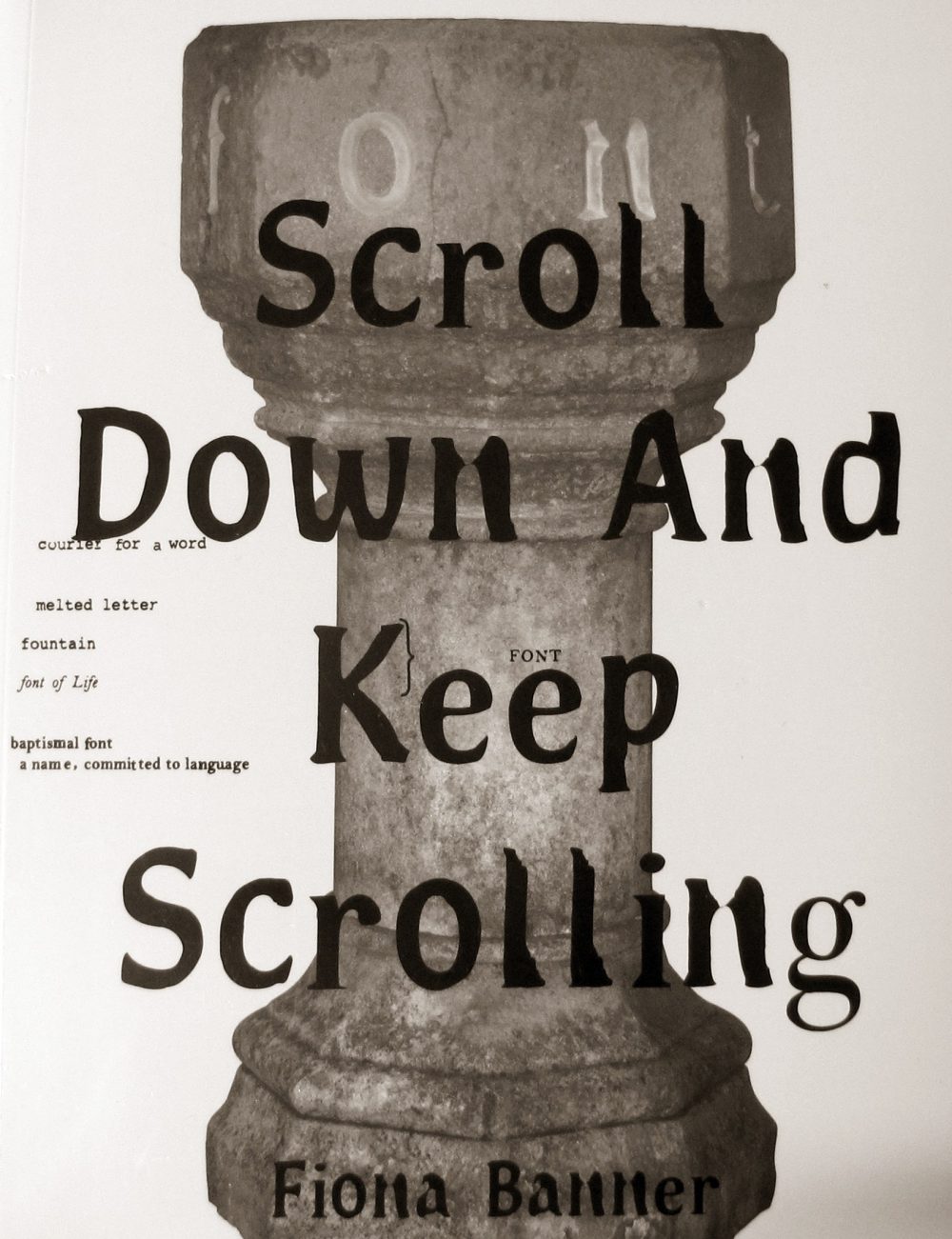 Scroll Down And Keep Scrolling

Published in 2015 to coincide with large exhibitions of her work at Ikon, Birmingham and Kunsthalle, Nuremberg, Fiona Banner’s book Scroll Down and Keep Scrolling is a slightly staggering 832 pages long. The book is comprised of photographs from the British artist’s archive, stretching back across thirty years of a practice diverse enough to contain video, drawing, sculpture, installation, photography, artist books and a huge variety of other text-based works. Scroll Down and Keep Scrolling contains no introduction nor essay to contexualise its content. Indeed, the collection of images of research materials, artworks, gallery installation views and abstracted detail shots are framed at a distance by numbered endnotes that assign them a title, material, dimensions, date and a location when relevant. At first glance, therefore, these seemingly random images are confusing. The assembly of images lacks clarity and purpose. Things start to become clearer, though, when you delve into Banner’s body of work a little more deeply.

Scroll Down And Keep Scrolling, by Fiona Banner

Banner owns her own publishing company called The Vanity Press, through whom the book is published. The company was founded back in 1994 after her first solo exhibition, Pushing Back the Edge of the Envelope, at City Racing, an artist-run gallery located in London until 1998. The Vanity Press publishes a range of editioned prints, posters, novels, books of photographs, individual photographs, magazines, leaflets, postcards, greetings cards, newspapers, drawings, vinyl and even text-based sculptures made from fluorescent neon tubing. Each of these are considered books. Sometimes Banner makes works that look like traditional books but cannot be read at all – because there are no pages to turn. The book as an object – its format, distribution and value – is consistently reworked and probed by Banner. “I’m as interested in the object of a book as much as the content,” she has noted. Banner sees language as a visual and a tangible thing. Texts, typefaces and fonts appear repeatedly. A marble sculpture titled Font (2015) opened her exhibition at Ikon and appears on the front and rear covers of the book. The baptismal object has the word ‘font’ carved into it in a new typeface which she has titled ‘Font’. There is humour in Banner’s approach. The typeface is an amalgamation of many she has previously “deployed” and is used throughout the book’s text sections. She describes its development as “a family tree arrangement where the child of Avant Garde and Courier mates with Peanuts and Didot’s child. Bookman and Onyx mate; their child mates with Capitalist and Klang’s offspring – the final font is an unpredictable bastardisation of styles and behaviours.”

Scroll Down and Keep Scrolling considers, as its title suggests, the printed publication’s significance in a contemporary age where we spend far more time consuming information on illuminated screens than on paper. The reproducible printed word revolutionised the way that people though, spoke and acted as fact and opinion circulated ever more widely. But what place does the book hold now? This a key question at the heart of this publication and of Banner’s work, particularly those pieces made via The Vanity Press.