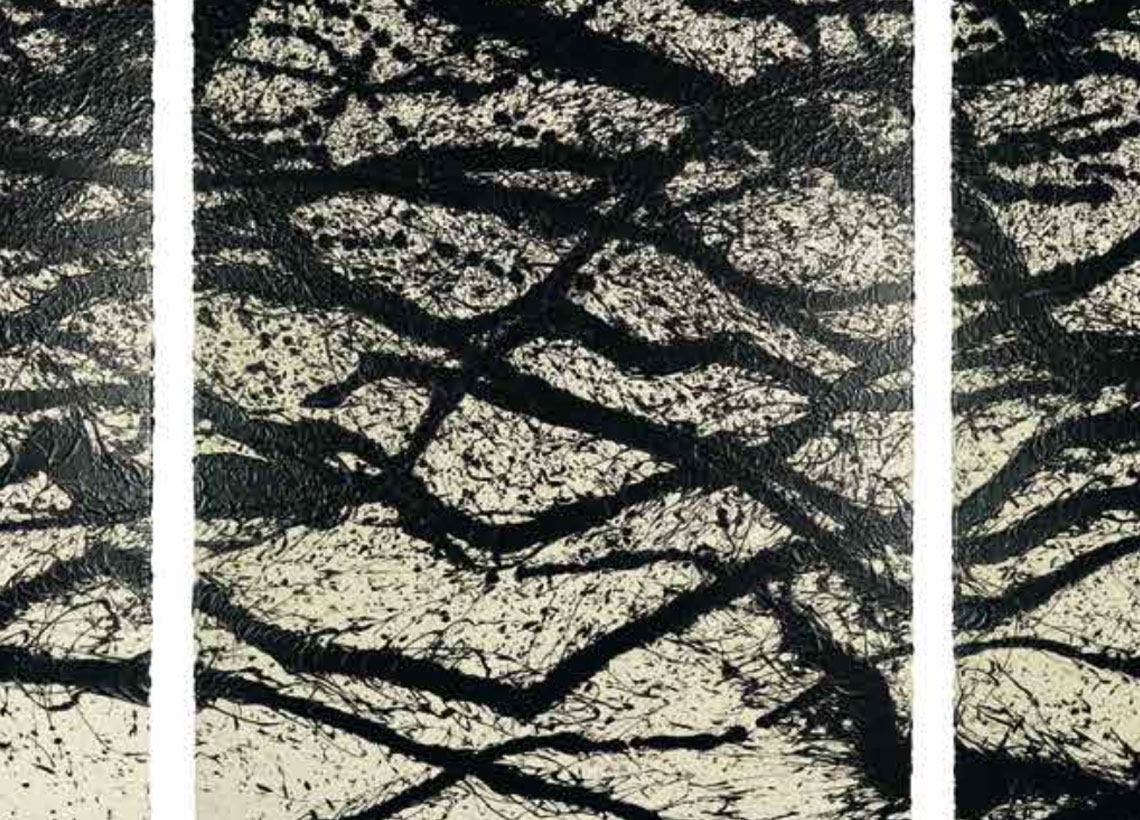 FABIENNE VERDIER: ONE AND ONENESS

When it comes to French artist Fabienne Verdier, a single brush stroke is all it takes to make a compelling work of art. A single well-mediated, perfectly executed, and precisely-positioned brushstroke which is a result of over three decades of contemplation and practise.

Verdier’s grand canvases bear a magnificent presence. Often, a single stroke, be it vertical or circular, traverses the centre of the canvas, sometimes uniting a diptych or triptych of segmented planes. In the nuances of the viscous ink – where it thins, thickens, or splatters – one can visualize, or rather, sense how the artist has moved, where she has exerted more force, sped up, or lifted off. In other words, the flow of energy is one with the formal qualities of her paintings.

In the eloquent writings of Doris von Drathen in her book Painting Space, “The viewer sees the traces of the brush occurring here and now, as if the acutely immediate coming-to-existence of these pictorial events were occurring right before his eyes.”

Verdier was born in Paris in 1962, but left her hometown in pursuit of an unorthodox path for her artistic career. Instead of looking to her predecessors in her own culture, such as Monet and Renoir, who captured landscapes with immediacy in numerous little dabs of paint, Verdier did quite the opposite.  At the age of 22, she ventured to Sichuan, China to train in Chinese calligraphy, through which she learnt to distil the essence of a landscape into a single stroke.

“…when I was in China and we went on an art school trip to the holy mountains, with all the students and the masters, everyone laughed at me when I set up an easel to make studies of the landscape. They thought it completely absurd, and I was very upset. Then one of the old masters explained to me that when you were in front of a beautiful landscape you had to let it enter you and become part of you and wait until it had been reduced to its essence before even thinking of drawing or painting it.”

And there she had stayed for ten years, rigorously and tirelessly assimilating the philosophy and craft of the Chinese tradition. Upon returning to France, she reconnected with Western art with a fresh eye, and ultimately synthesized both Eastern and Western aesthetics into her own style of abstract painting. She is one of few, if not the only, artists who have so thoroughly and successfully unified disparate philosophies into such a distinctive visual language.

The simplicity and singularity of Verdier’s brushstroke is key. It represents everything but references nothing, as and a result, an entity that any viewer, regardless of cultural background, art-historical knowledge, or other social markers, may respond to on an intuitive level. If to paint is to represent or document something else, it may be reasonable to say that Verdier isn’t so much painting but mark-making. Her art is the materialization of its own happening; a transcendental event which occurs infinitely in the experience of its viewers.

In contemporary art, it seems that the notion of the “artist’s hand” has lost most of its relevance. Yet, in the case of Fabienne Verdier, it is not only relevant but essential. For the very making of the artwork is the art. The contemplation of a subject, the distillation of its form and the execution of the brushstroke are inseparable facets of a singular process that is unique to Verdier. Her experiences, background and philosophy are manifest through her hand and her hand only.

But Verdier does not work alone. In the same interview with Michael Peppiatt, she says of her artistic prerogative:
“I don’t believe one is in control when one creates – it’s an illusion, because we are no more than specks of dust in space. But when I put myself at the centre of gravity by standing up and moving with the brush, I feel I am tapping into these forces and the truth that’s transmitted goes far beyond me as an individual. At that point I feel the most important thing I have to do is to respond to these forces and transcribe them.”

The idea of “one” then, instead of being singular or individualistic, is actually of wholeness – that everything in the universe is interconnected, interdependent, and of one entity.

Standing in front of a Verdier canvas, one might find oneself appreciating, unknowingly, the little ‘accidental’ details – splatterings of paint in the space in between the artist’s disciplined hand and her relinquishment of control to nature’s forces. It would be erroneous to say they are unintended, for they are a by-product of a flow of energy that is both pre-mediated and inevitable. Like a speck of paint on the canvas amidst many, it is comforting to know that oneself, along with countless others, share a universal appreciation of that single, all-encompassing brushstroke.