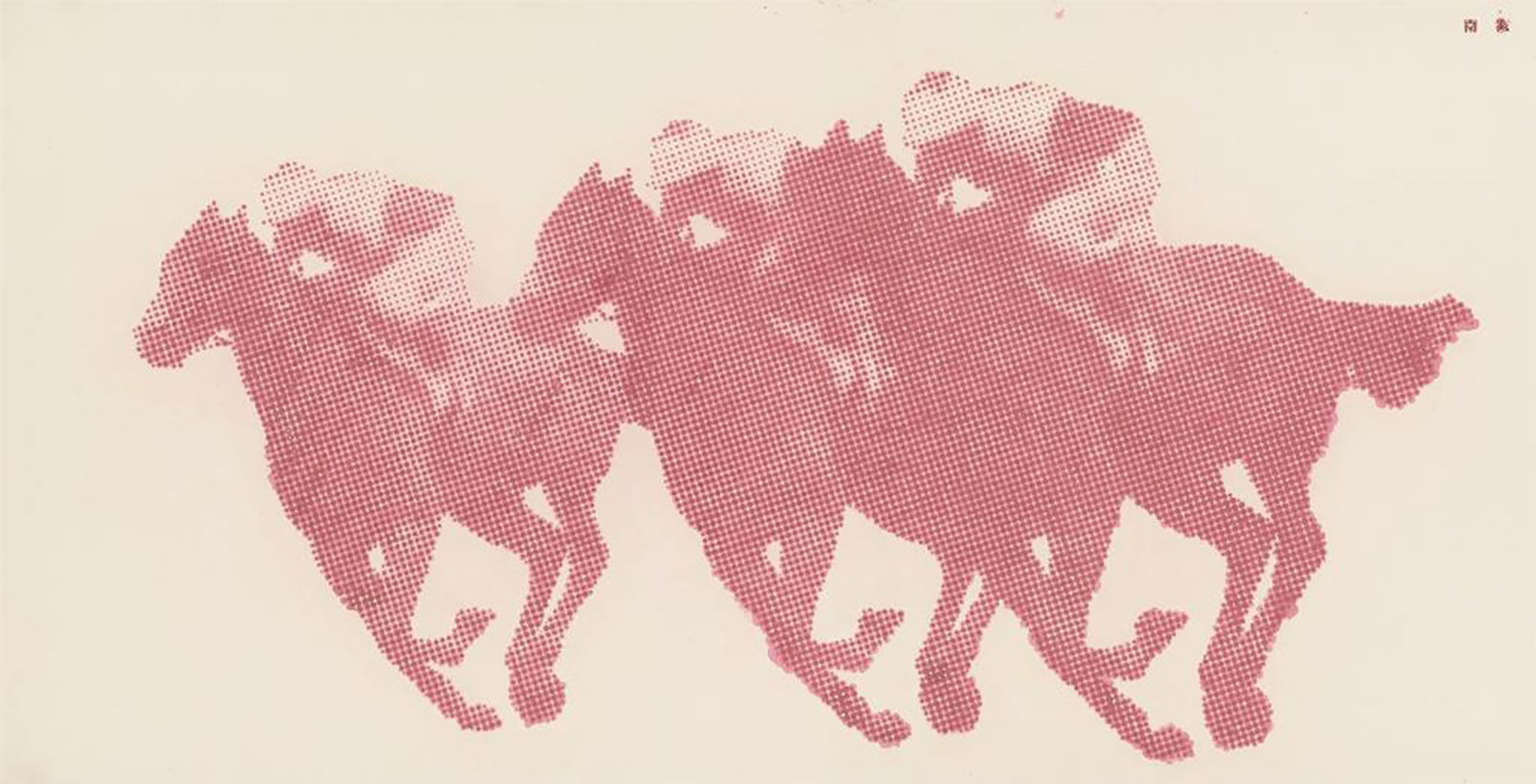 When Hong Kong was taken over by China in 1997, Margaret Thatcher negotiated with Deng Xiaoping in order to smooth the transition and keep some British marks and traditions that had accompanied the people in Hong Kong. “One China, Two Systems” is a constitutional principle formulated by Deng Xiaoping for the reunification of China during the early 1980s. He suggested that there would be only one China, but distinct Chinese regions such as Hong Kong, Macau, and Taiwan could retain their own capitalist economic and political systems, while the rest of China uses the socialist system. Deng Xiaoping also promised Thatcher that the horse racings will continue. This artwork conveys this particular promise.

The pink colour refers to Hong Kong, to freedom and sexuality, whereas the red alludes to power, authority and China. As the take-over took place, the colours mix, today it is hard to distinguish notions and cultures.

In China, some people miss Mao, some don’t. Politics is an important subject in Nan Qi’s art.

Nan Qi was born in 1960. When he entered school, people used to claim “Long lives Mao!” When he was a kid, everybody loved the chairman. Then, Nan Qi travelled and understood that there are different views about Mao. Today, he respects him. At different steps of his life, Nan Qi has had different opinions about Mao, his personal feelings towards him have evolved but his art is not about his personal feelings. Indeed, Mao is not a reference to Mao himself; it is China’s signature. Mao is an icon of China’s culture and history today. It is the same with ink and wash, it does not refer to ink and wash but to culture. In China, when someone asks: “do you have ink?” It means, “Are you educated? Do you have much knowledge?” His artworks have different layers of understanding as well as different layers of ink.

Nan Qi was born in the age of the Cultural Revolution, it is not a choice. He feels it is useless to hate this period. He lived through it and the bad times helped him now to be stronger and successful. Back then, he was very poor and hungry, he only had one single pair of shoes from the age of 5 to 8. He struggled a lot. This helped him to develop a positive attitude today and he is grateful of this freedom.

The 2 Mao are contrasting, one is the contrary of the other. They represent the pros and cons of Mao, as two sides of a coin. When one sees a Mao portrait, there are different ways to look at it as different angles to understand Mao. On the right, Fortune Dot is the negative one featuring the outlines of Mao. The white space – negative space – features the inside of the character: Mao’s figure is empty. Leaving out white space is an important concept in traditional Chinese painting and it requires a lot of experience.

In Chinese culture, a mole under one’s lips is a sign of good fortune and Mao has one. One could say every dot of Nan Qi’s artwork is a fortune dot. It does not only refer to the mole of Mao, but also is an artwork itself. It is not a unique thing to feature Mao but Nan Qi’s unique contemporary approach in ink and wash has made him stand out in thousands of years of Chinese art history. A lot of artists put the focus on Mao, he puts the focus on the dot itself. The dot is an artwork in itself.

The two girls are the mirrors of each other.

Chinese Female Soldier B features the character Nan whereas Chinese Female Soldier A shows the character Qi. Nan Qi’s real name is Wang, meaning King. He chose Nan Qi as his artist name because he misses the village where he grew up. Nan Qi means Southern Stream and is a reference to a creek running through his hometown. Also, the inside part of Chinese character Nan (South) happens to be the same as the RMB symbol. So Nan refers to the currency too. Nan is thus a money symbol. Nan Qi confronts capitalism, destroying purity and the authentic nature of humanity.

Nan Qi is one of the pioneers of the contemporary ink movement in China. There are 50 accomplished artists in this movement and he was voted as one of the top 10 by famous art critics. The movement started in 1985. Each dot has different layers of ink and water. His dots represent the mastering of ink technique, it is done very meticulously and requires a lot of patience. Every year, he creates a few single dots. It is really his signature and it changes a lot through years as one’s signature is also evolving.

Nan Qi was influenced by Warhol but he wanted to create something different, he is the first artist to go from 2D to 3D in ink and wash. His artworks achieve 3D effect without any 3D glasses or mechanical equipment. The 3D effect helps viewers to calm down immediately and frees the mind from daily worries. He uses software technology to duplicate the visa sign and projects it on paper. The important step comes with the introduction of ink in the sketch.

Visa represents credit and trust. Society today is losing faith; it is a society without credit. Nan Qi confronts society. RMB is a hot topic in the world today, high rank officials are corrupted, and the currency of the country is involved. The different symbols and topics merge in his artworks and provide the depth in meaning.