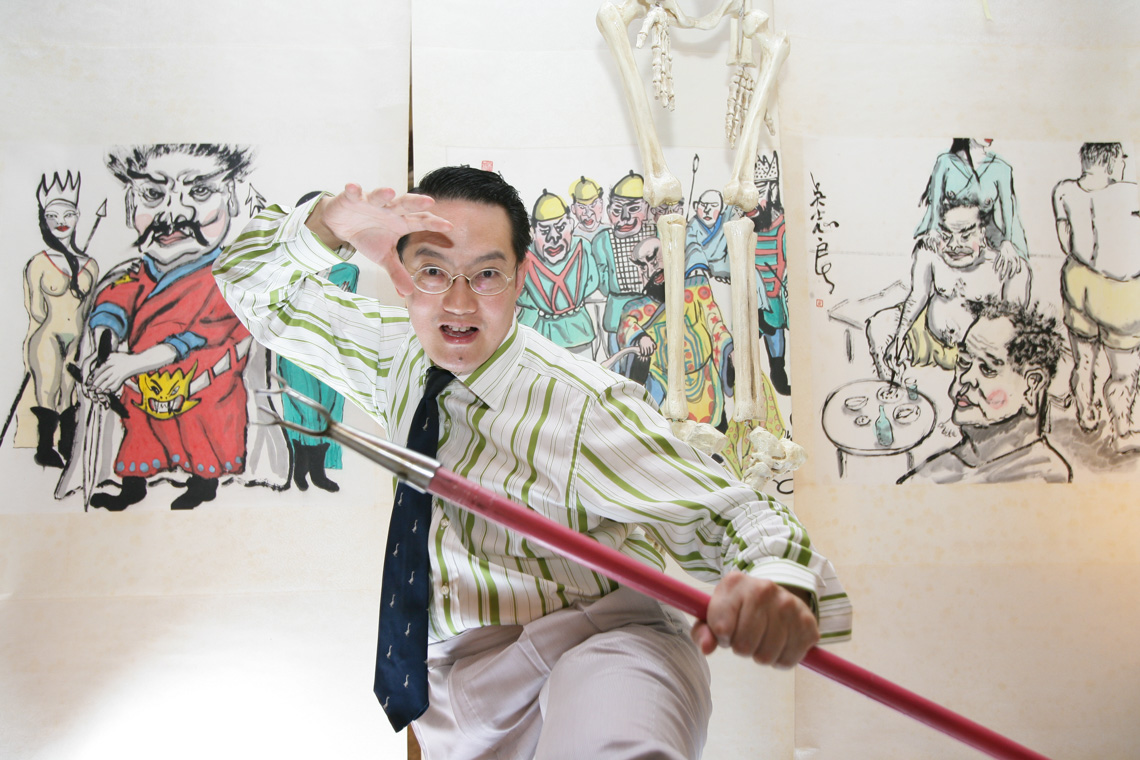 “Let’s do nothing but Chinese Contemporary Art!” – a discussion with Woffles Wu

Tell me a few words about yourself and the art you relate to.
Woffles Wu: First and foremost I was, and am still, a painter without a commercial objective – I just love to paint. In my teens I was influenced by the Matissian style of Ding Yan Yoong and created a lurid, manga style of my own depicting the life and loves of an imaginary character called Lewd Lew. In 1987 I was given my first (and only) solo show in a gallery in Taipei, Taiwan. It was covered extensively by the press who dubbed me the ‘NewAsian wiz kid’ for my garish colours and the style I adopted. People do things for different reasons. As a collector, I am not a mad collector but art feeds my soul. I do not have interesting views on the art scene as I find it too commercial. If I could choose one painting and one sculpture for the rest of my life, I could. I don’t feel the need to buy. It is not a necessity, it is simply an act of excitement.

Art “feeds your soul,” that is not a statement to be taken lightly. What exactly do you mean?
WW: Well if you are artistically or musically involved then there are certain things that give you pleasure or a sense of satisfaction. Music for instance has the power to soothe you or provide you with a sense of comfort. The visual arts have the potential of offering you the same. It is a process of appreciating what is being said, and finding interests which resonate with what you believe in. The reaction is like “Wow!! That is fantastic, how could anyone think of that?” You are left with a sense of wonderment and amazement by the creative people that are out there.

Is this the “Wow” factor that encouraged you to start collecting?
WW: I’ve been collecting different kinds of things since I was about 10. When I talk about collecting I don’t exclusively refer to art and artworks. I have collected a whole range of different things ranging from football cards and cigarette tins to paintings, and from comic books to sculptures. I am a bit of a hoarder. The first ever collection I started was of football cards when I was about 10 years old. I still have them. I then moved on to other things, more refined things. I turned to curious collectibles, until I finally found myself appreciating the visual arts. I bought my first Miro lithograph when I was 13, followed by a Dali etching, and then a Henry Moore maquette before I turned 20. Back then buying such works was more affordable. Not like now. Times have changed. I bought whatever tickled my fancy every now and then. It all changed when I was introduced to Chinese Contemporary Art.

What is it about Chinese Contemporary Art that urged you to pursue it more-so than the other items  or artistic genres that you have collected?
WW: Chinese Contemporary Art forgot about the two-dimensional. The West was boring, always portraying the usual subjects whereas China was introducing a new language, a new scepticism in the 90’s. The work expressed a sentiment which was at once whimsical, lyrical and political. The works were visually attractive and so I started buying a few pieces. When the Chinese Contemporary Art scene started to emerge people didn’t understand it nor what it represented and hence weren’t buying. I could buy a painting at auction for less than $2,000 – $3,000. I soon realised that I had quite a few works, several of which were too large to fit into my house so I searched for a warehouse space. Soon after however my collection grew out of that as well and I realised I had to expand.

How did you start your museum, The Museum of Contemporary Chinese Art?
WW: To be fair opening the museum was one of those crazy things you do in your life. In fact, I think it was a mid-life crisis. I wanted to do something thematic for the first time in my life.
My collection had grown enough that I needed to find a new space and that is how the idea came about – “Let’s do nothing but Chinese Contemporary Art!” That is how the museum came into being. Our theme guided the collection and informally set the message. I couldn’t just collect whatever I felt most inclined to. Instead I started to buy and sell work to fill in the gap that illustrates the development of the Contemporary Art scene in China. Since then it has simply been an evolutionary effect. We offer programming such as educational activities for kids and continue to expand our collection. There are still pockets of wonderful works to be discovered. The collection is an evolutionary display of the Chinese mind.

Do you think there is still a high appreciation for Chinese Contemporary Art?
WW: The appreciation of art has shifted to the appreciation of money. Change has happened for the wrong reason. It is in fact a habit quite like gambling. The Chinese Contemporary Art scene experienced a lot of scamming – galleries controlling collectors, controlled auctions, prices overly inflating, extensive acts of buying and selling – until it finally collapsed. The trend collapsed because it found itself to be a victim of manipulation. The international focus has now shifted to Southeast Asia. It started as a point of emphasis, then transitioned over to China and has now returned to the spotlight. Singaporean artists are gaining exposure, with masters such as Cheong Soo Pieng reaching exceptional prices. Is this good or bad – I don’t know.

What is your opinion on the concurrent international art scene?
WW: When you visit dealers they are like spiders waiting for their prey to get caught in their web. I see this audacious behaviour and I don’t like it. I don’t look for art because I don’t like the people who run the art world and its market. Auction houses wine and dine you and pass you influences such as “you should bid for this artist, the work is very promising.” A year later you decide to sell the work at auction and the house no longer supports your decision. Its interests have changed direction and they simply pose the argument that there aren’t enough collectors to target, or that collectors have changed their preferences.

As a collector based in Singapore what is your understanding of local incentives and the art market?
WW: Before Gillman Barracks was initiated as an art hub in Singapore many gallery owners and myself decided to join our resources and co-locate to the same area. We decided to launch somewhat of a community in the mid 2000’s. Gradually as property prices went up some members of the group decided to sell, and others moved elsewhere. I am the only one left in the area and that has caused it to become rather uninteresting. What art needs is to rise from the grunge and then possibly have the government refer to it as ‘the new art district.’ Art needs to be left to mature organically. The government relies too heavily on formulae that are too regimented. People need to be left to their own devices and the growth should happen without governmental support. In my opinion, warehouses are the best. They are gifted with high ceilings and are located in  vibrant neighbourhoods. You may have a merger of the local cafe, the skilled metalworker, and the bohemian perspective. That is what art is about. Auction houses are not where artists start off.

As a genuine art collector and entrepreneur, what is it you value most when people view your collection?
WW: What interests me is to see people enthused by both the art, the artist and his motivation. Exploring a museum has no interest when you have to show your collection to people who are more interested in price tags than a genuine interest in the art itself. That’s so boring.

READ MORE ON OUR JOURNAL

4 thoughts on ““Let’s do nothing but Chinese Contemporary Art!” – a discussion with Woffles Wu”